Many readers have followed our progress as we undertook the challenge of stopping erosion at two locations at Kilkerran on the middle Girvan. I though it was now an ideal time to provide another update that shows just how much has been achieved. Of course these are just two sites that contributed thousands of tonnes of soil to the river and there are plenty more elsewhere we would like to tackle in future, but what is really important is that our efforts are successful and erosion has largely ceased.

Going back in history, this section of the river was straightened and levied nearly two hundred years ago. Prior to that the river meandered widely across the flood plain but as agriculture developed, efforts to improve the land led to massive straightening  in this catchment. Consequently many many years later, it should come as no surprise that the river is trying to revert to a more natural course. Of course land managers generally don’t want that  to happen as it would impact on their ability to farm the land and while we like to see unaltered and natural rivers, the reality is that there’s only a handful of areas in Ayrshire where man hasn’t changed the course or function of watercourses over centuries and restoration on a catchment wide scale is not feasible.

Restoring the entire river to its original course is unrealistic and could potentially lead to huge silt issues for many decades to come with potentially catastrophic results for wild salmon and trout stocks. The strategy we adopted was to stabilise erosion  where the river was attempting to break out of this long established channel. By doing so, we hoped to reduce silt inputs which in turn would benefit productivity in the lower reaches.

The photo gallery below charts the progress made over the years since the Trust first became involved back in 2011 when we gave advice on what techniques may be suitable to address what was becoming an increasing problem for the landowners. ART first took steps to stabilise the bank in April 2016 after an earlier attempt by the owners had failed to bring about the desired result. We have revisited many times since then and watched as the banks revegetated. Of all the techniques employed, none were more important than fencing as this step allowed the green engineering techniques to flourish and achieved the desired results.

Landowners, land managers or anyone involved in river management wishing our assistance or advice please call us. We are more than willing to help others with this type of work and have considerably more experience than most. We experiment with many different techniques throughout our operations and like to think our pioneering approaches and lessons learned will help others too. We can provide a full installation service and are willing to help landowners prepare the appropriate CAR applications for SEPA and SRDP or other grant funding where necessary. We aim to help SEPA and landowners achieve compliance with General Binding Rules, improve water quality and protect bathing water standards all in line with the obligations imposed by the Water Framework Directive that the Government signed up to. 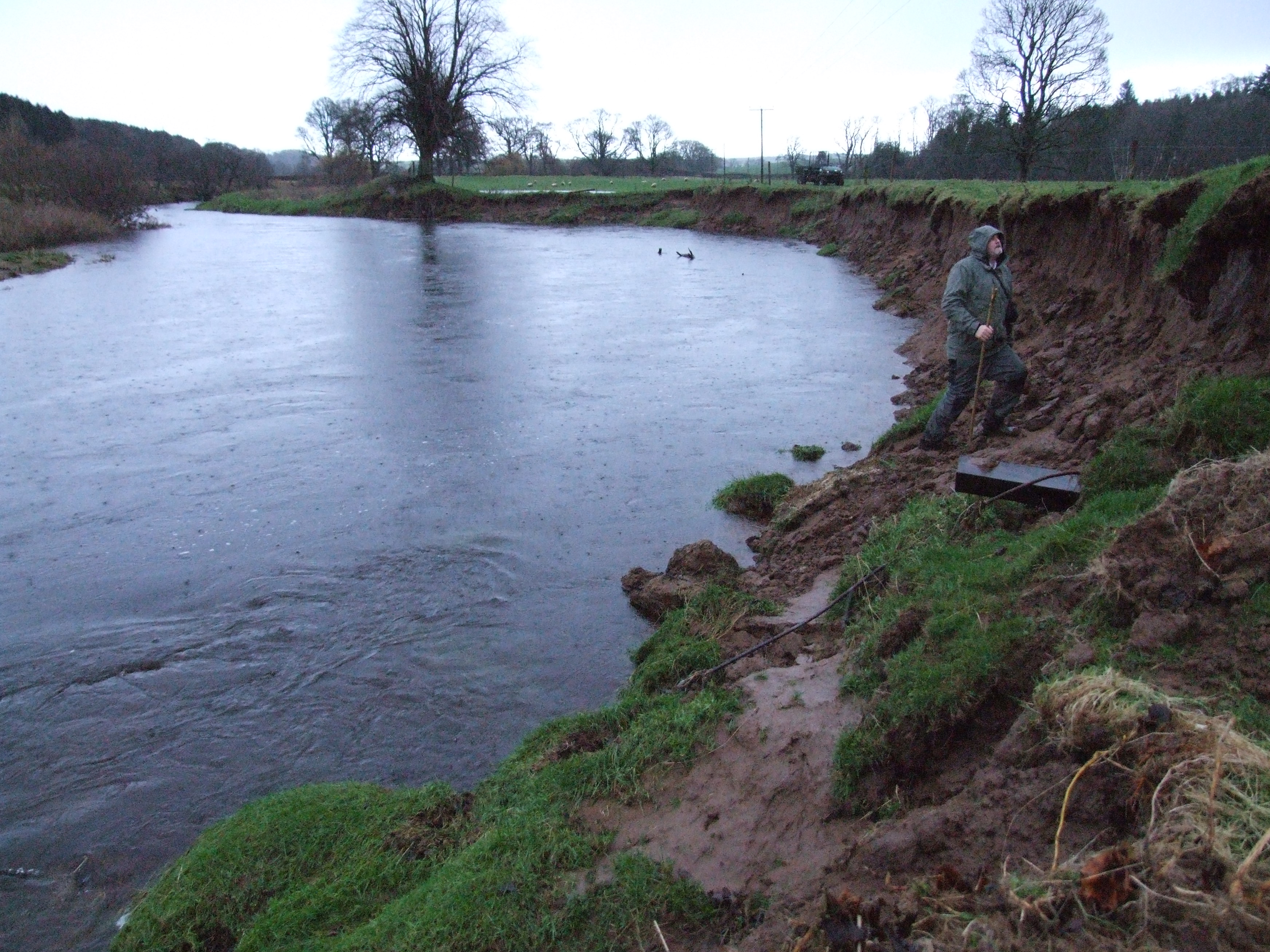 The upper site at Kilkerran in November 2011 looking upstream. The river was in spate at the time of this photo 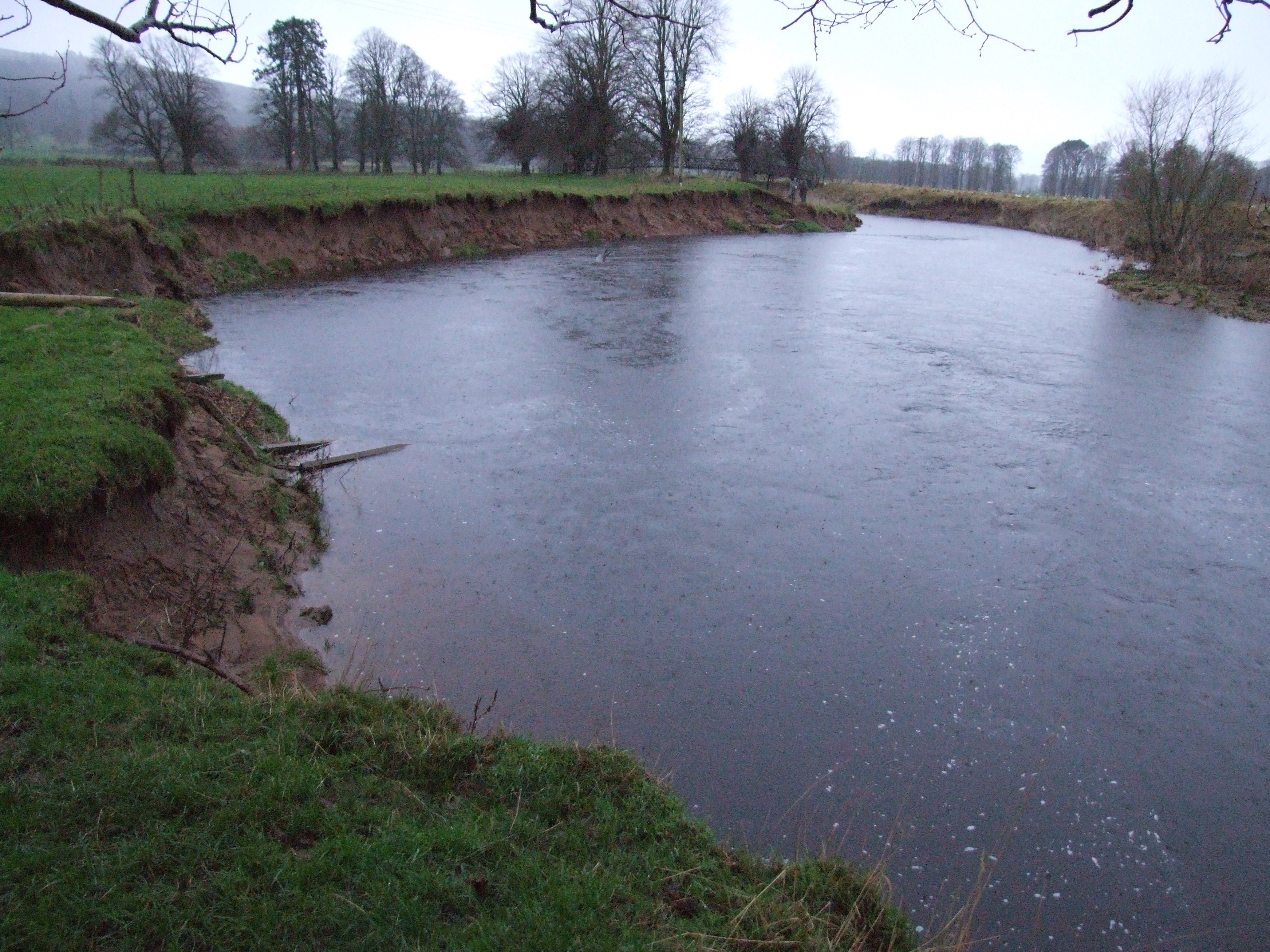 Again the upper site in 2011 but this time looking downstream from the top of the affected section. There was over 100m of river bank affected here. 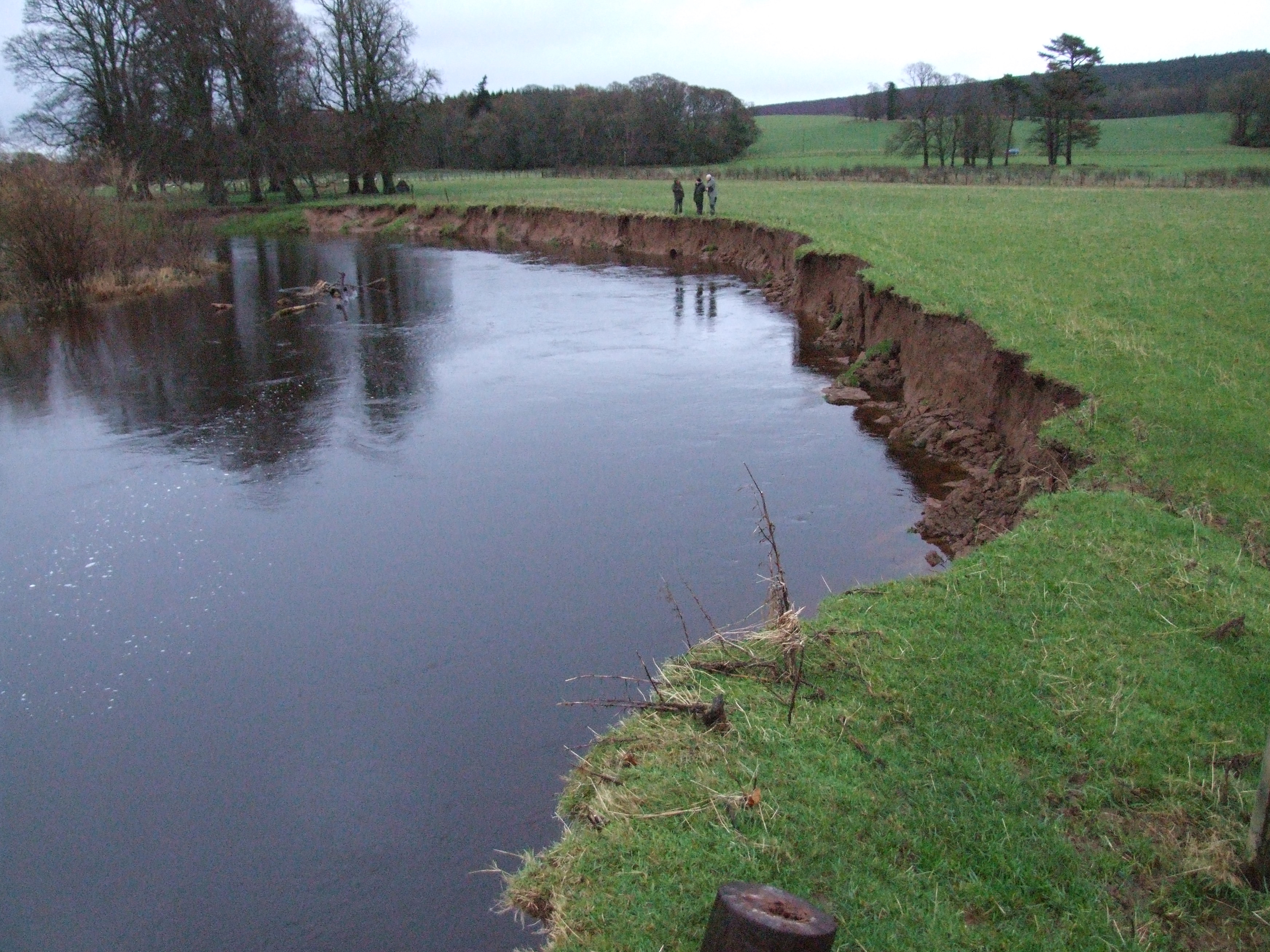 The lower erosion area in 2011 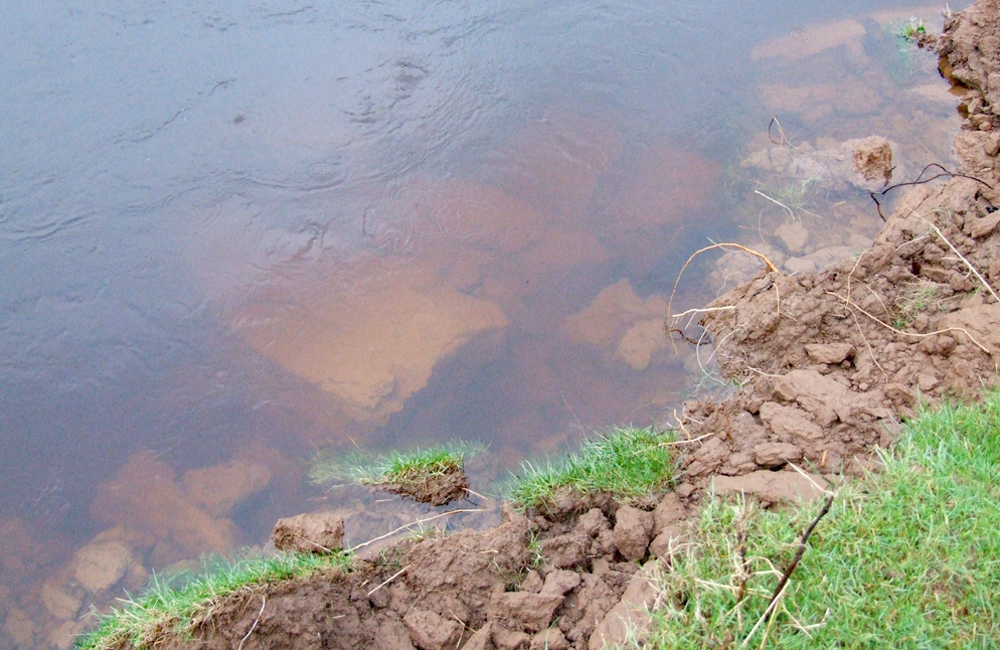 Soil that collapsed into the river and eventually washed downstream (2011) 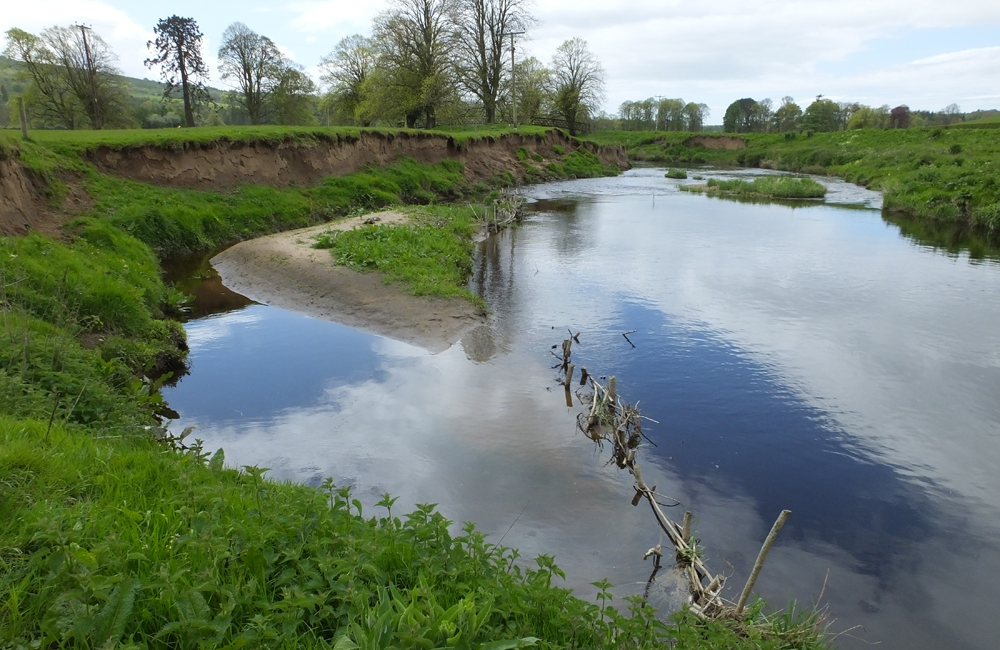 (2014) An early attempt by anglers to stabilise the upper erosion using Hazel spiling had failed (as Hazel doesn’t root), but showed that spiling had potential although we used several techniques at these sites to achieve the desired results 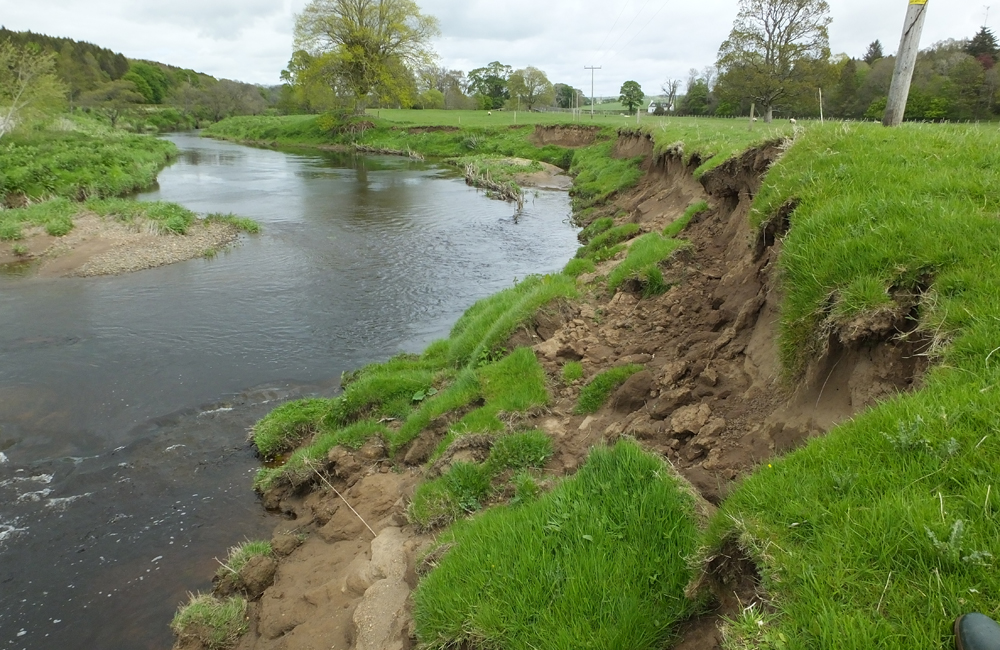 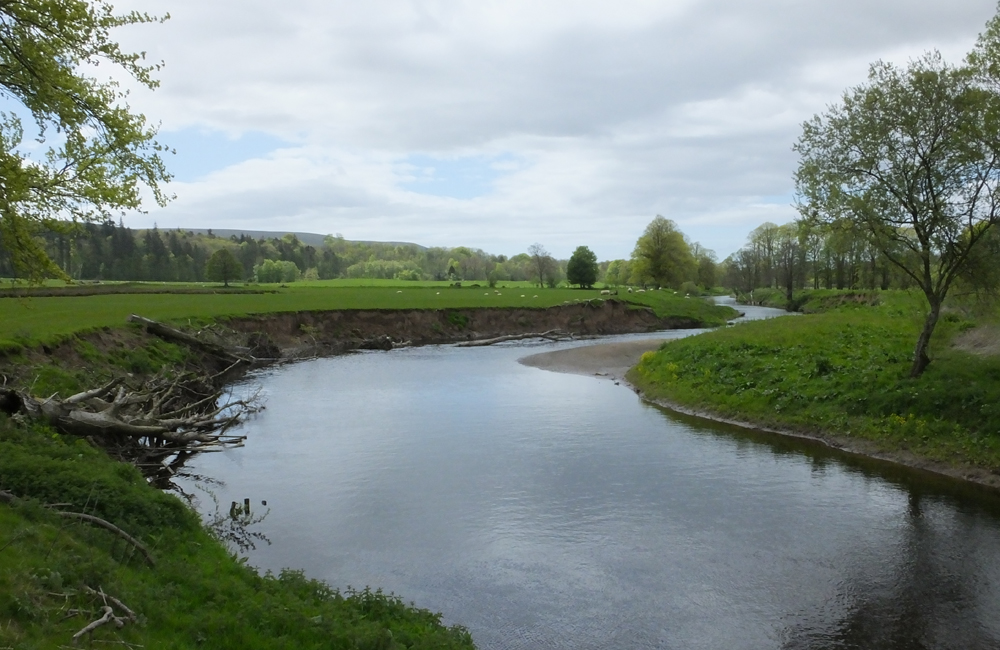 Again 2014 after root wads and trees had been added by the owners to part of the lower erosion section. Unfortunately some trees washed out during spates and headed downstream; some becoming lodged in the pool. Erosion continued on the bank and this section still required considerable work 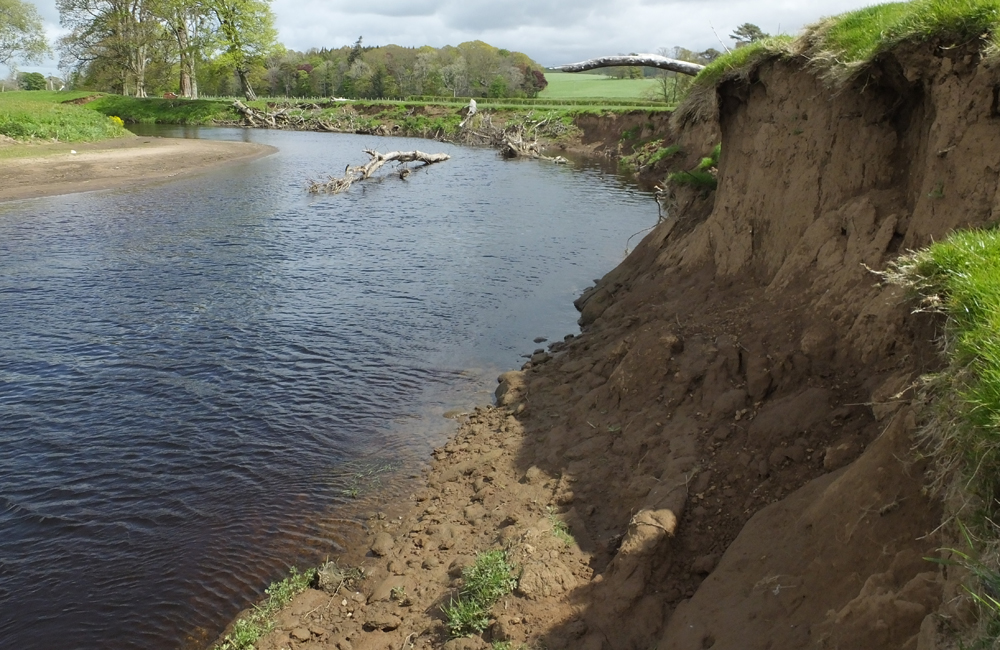 (2014) Banks continued to erode and we were offered our assistance once again. This time we sought funding and intended to perform the works ourselves. 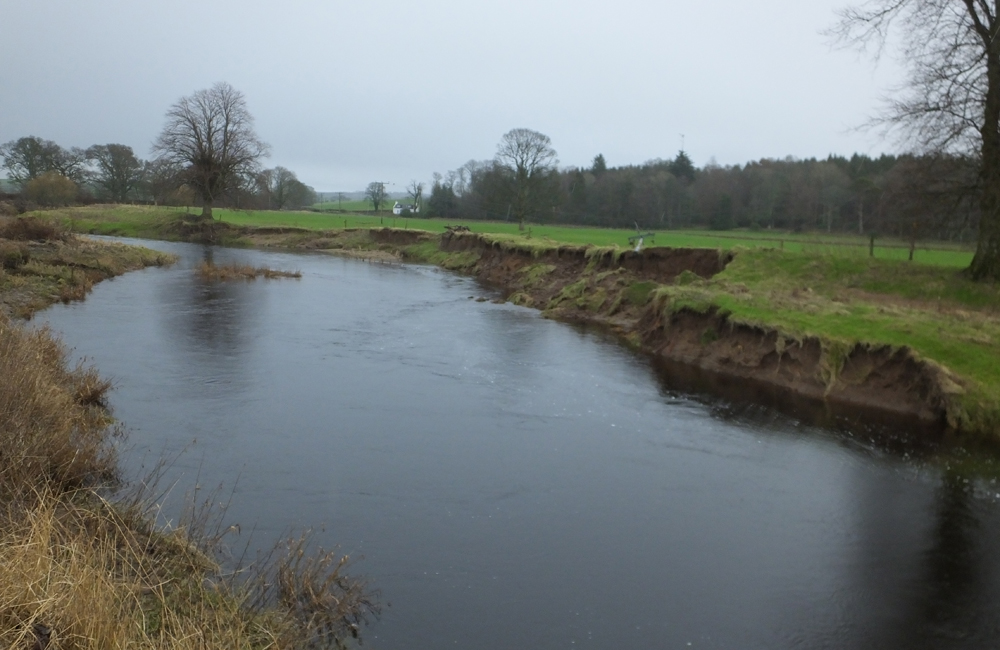 January 2016 and the situation had worsened. Erosion extended much further around the bend on the upper site 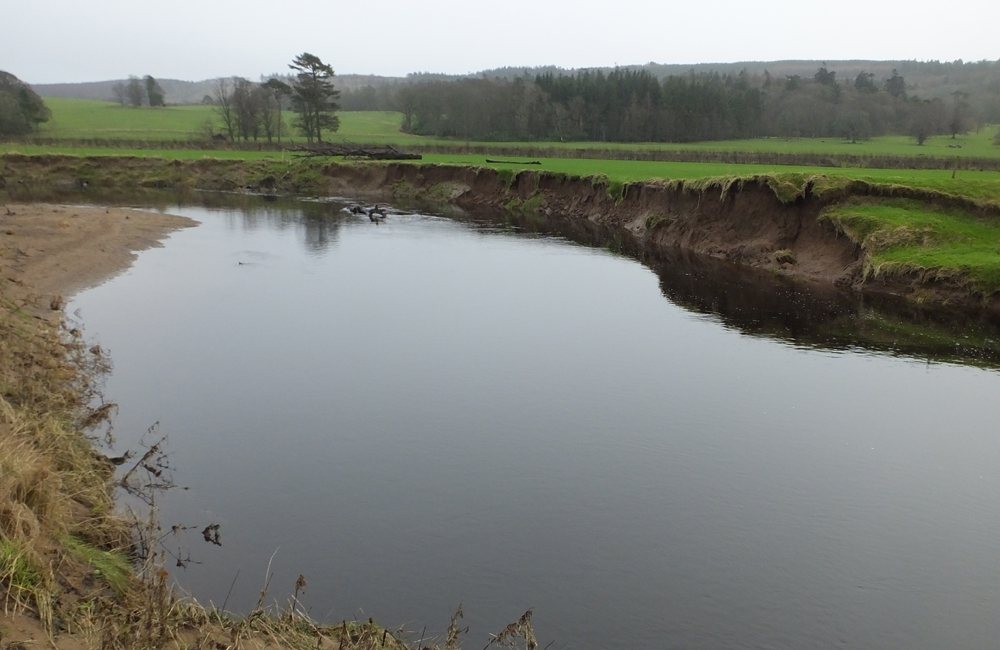 January 2016 and the lower site also continued to erode. Intervention was essential 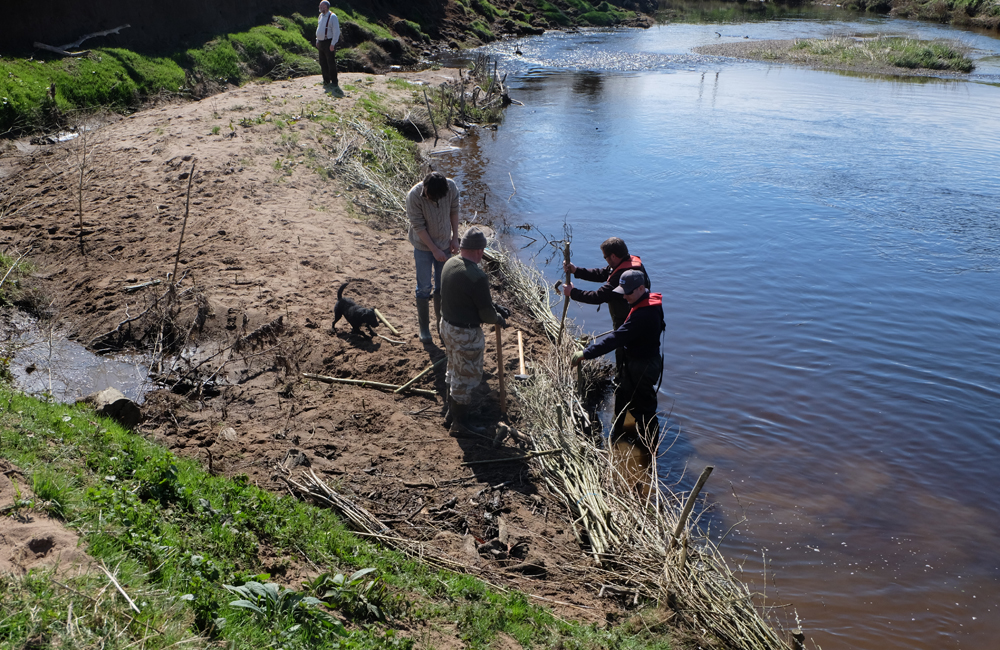 April 2016 and ART along with volunteers began work by installing brash and willow spiling on the upper section. In reality, it didn’t take that long as 16 volunteers turned up and helped on a Saturday morning some coming from the central belt just to take part and gain experience. 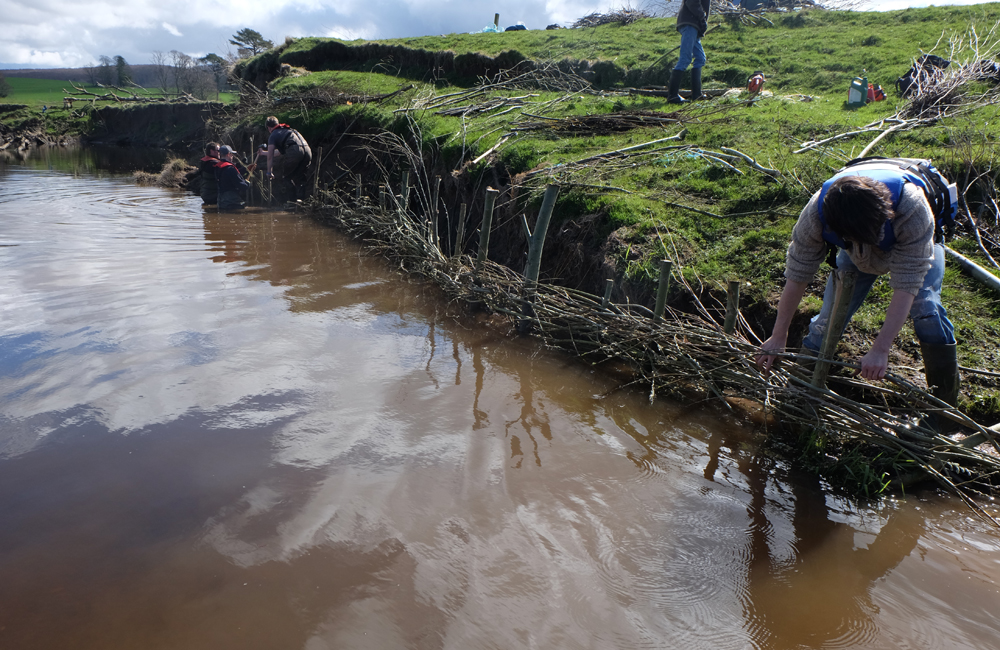 (April 2016) The lower section was also treated to a length of spiling and considerable willow planting on the bare banks. The spiling was constructed near the downstream end of the erosion as it was here the greatest volumes of soil were being lost 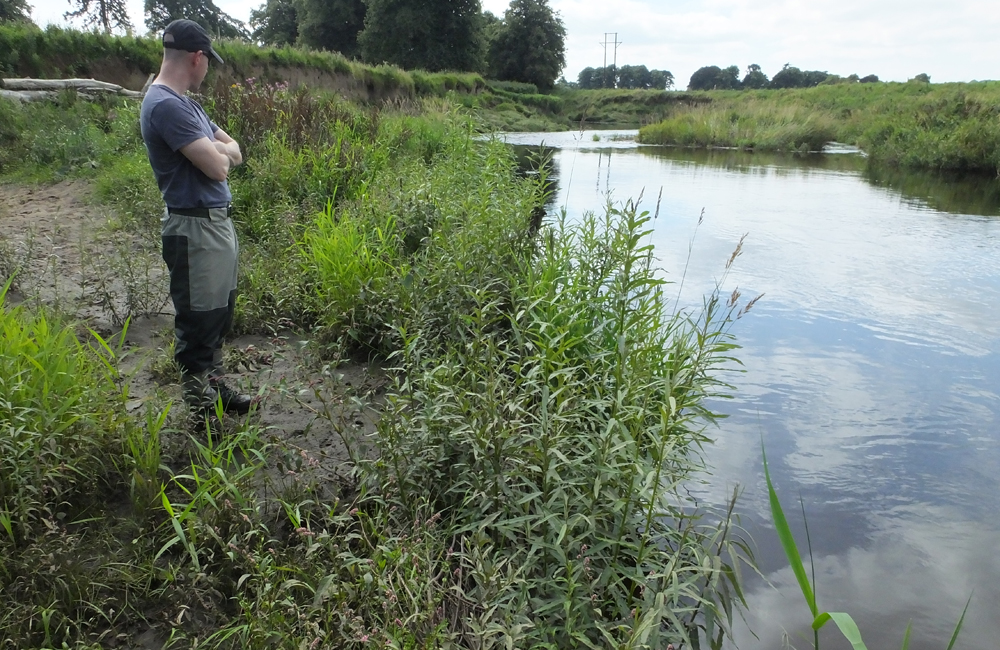 Inspecting the willow in August 2016. Already the banks had started to build behind the willow growing at the water’s edge 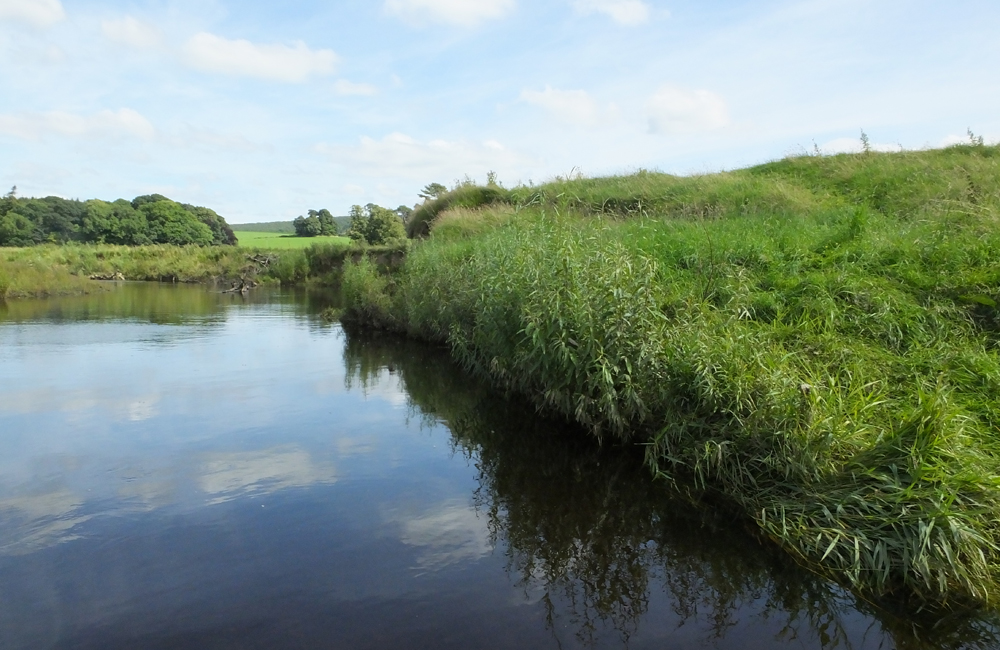 Willow spiling at the lower site after 4 months (Aug 2016) 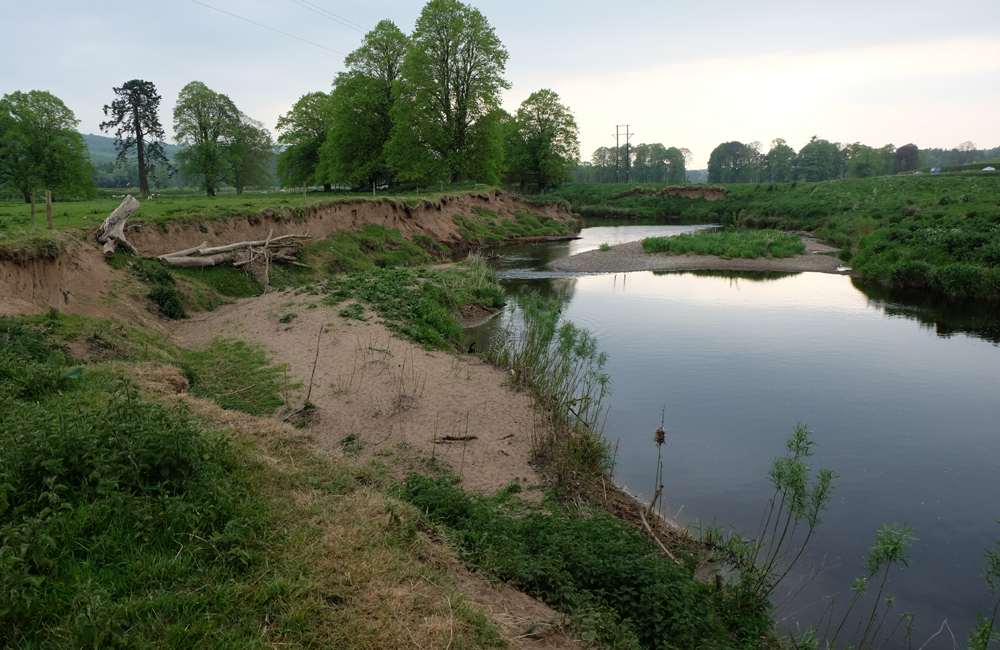 May 2017 and the willow at the upper site was struggling and had taken a hammering in winter spates and as a result of sheep grazing however the bank behind the willow had increased in height. The willow was trapping sediment from the river rebuilding the bank. 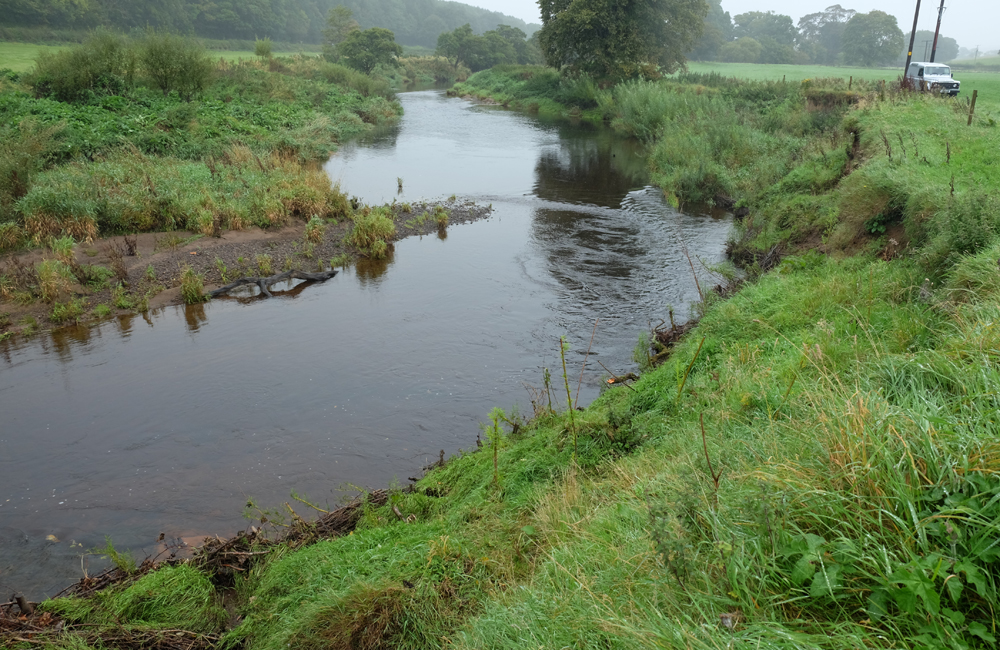 (Sept 2017) We added brash bundles at the toe of the eroding bank and seeded bare soils in the summer 2017. More trees and willows were planted across the site. The willow at the top of the site by now was growing well and provided a dense barrier that protected the banks during spates 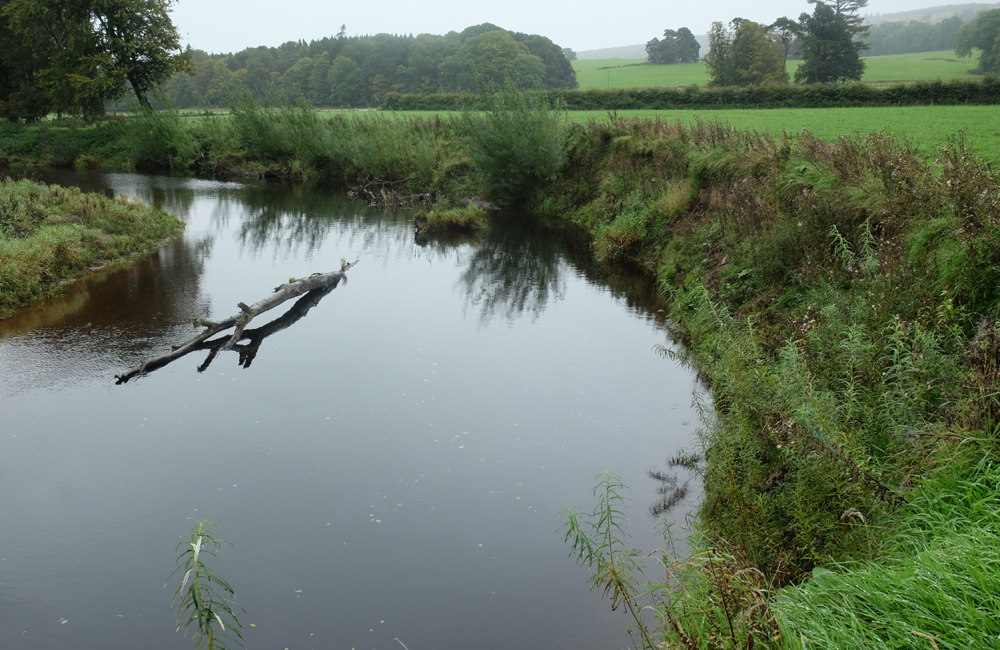 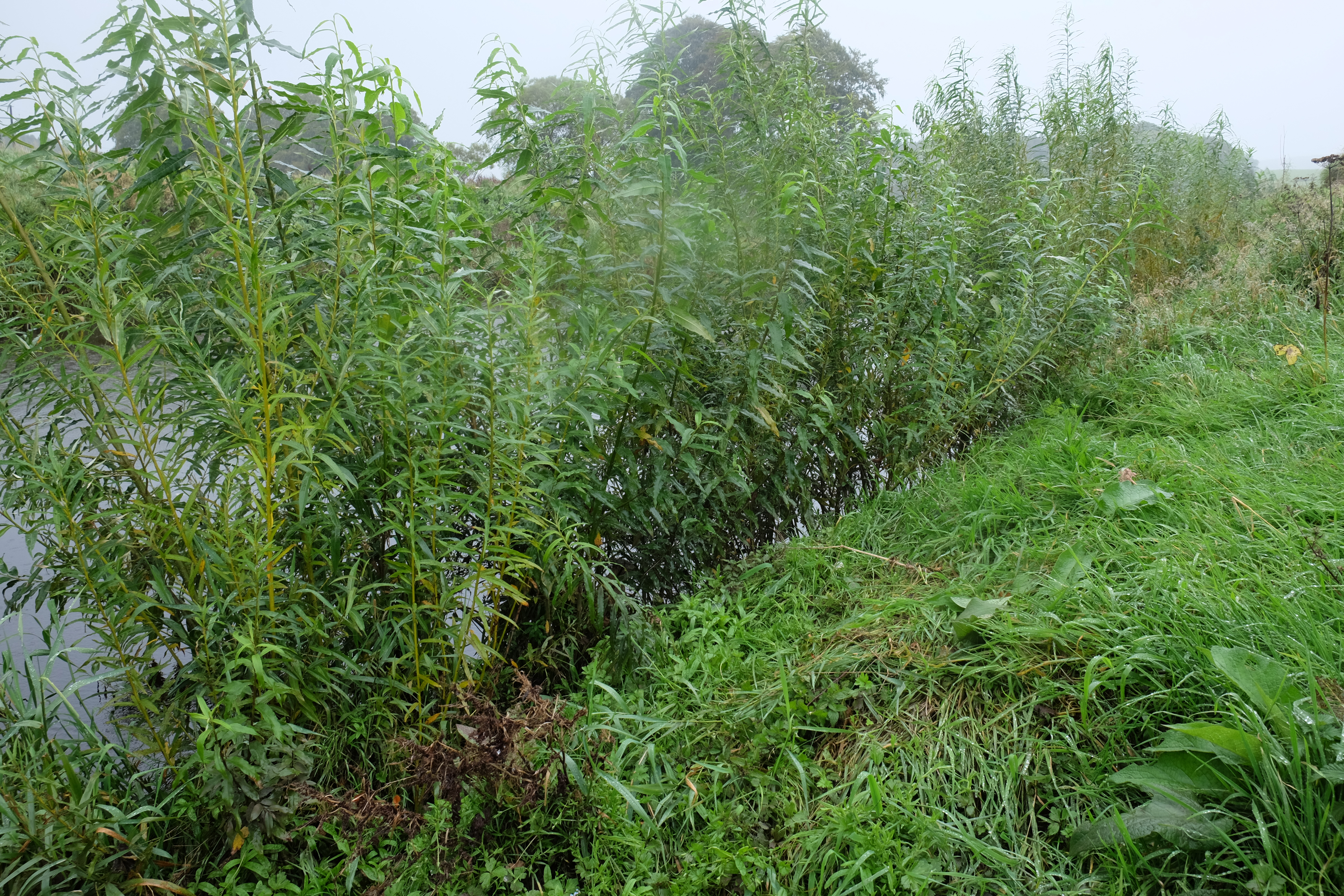 Detail of the growth on the spiling in September 2017. By this time our only concern was that sheep continued to damage and kill saplings preventing the installed green engineering from achieving the desired results. Fencing had become a priority but was not a popular solution 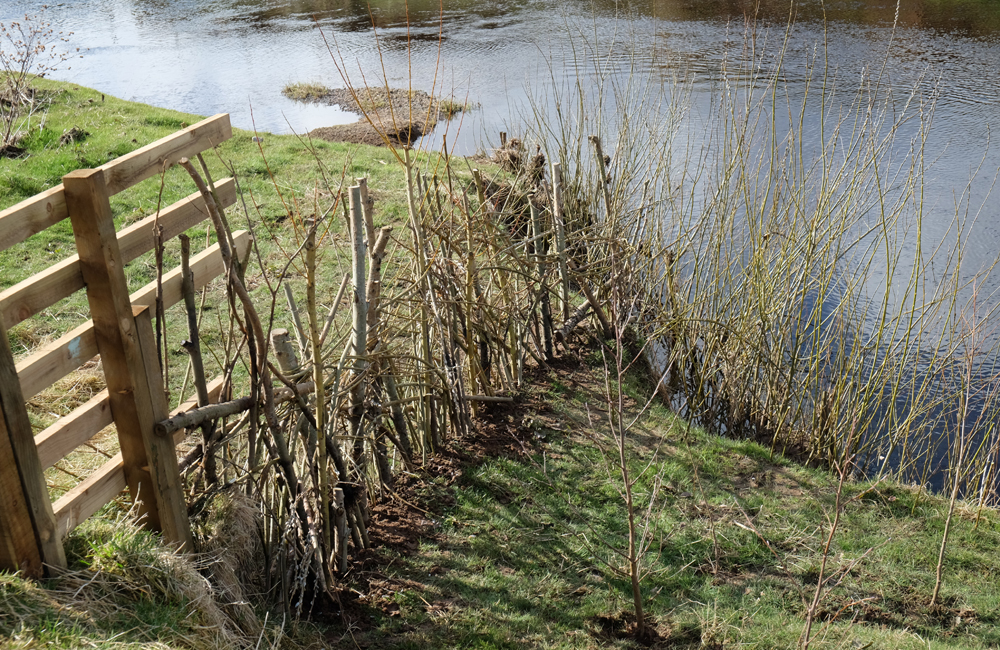 March 2018. Fencing agreements in place we still had to provide a solution to link the fence to the water’s edge due to fears that it may all be washed away in spates. We installed leaky willow barriers to link the stock fences to the river. This overcame the landowners concerns of fencing alongside the river. This was experimental but proved effective 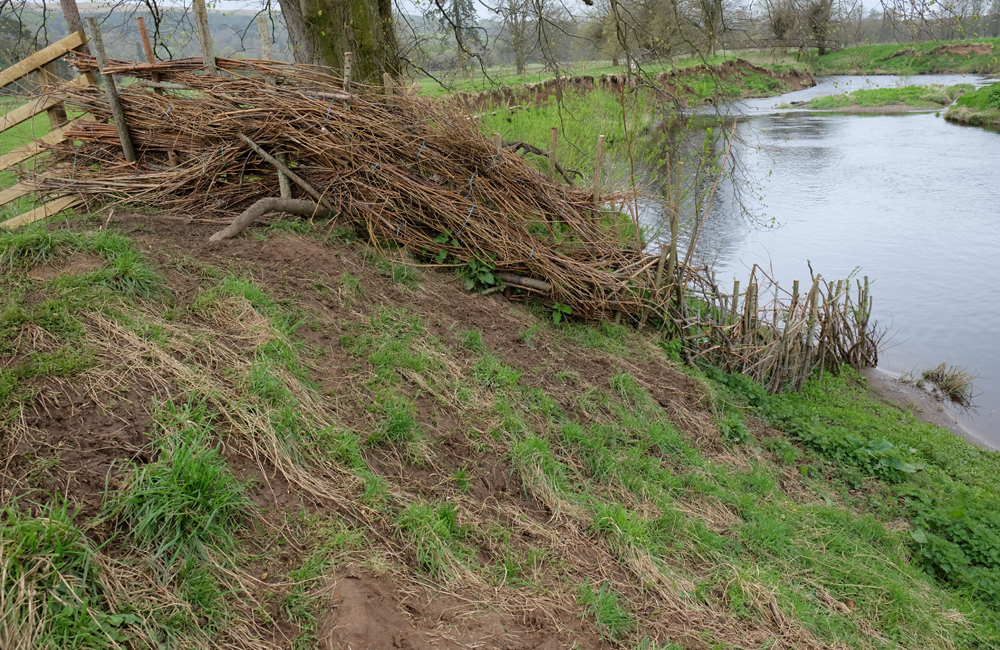 These leaky barriers were all very experimental but we were delighted they have worked well. Essentially the sheep were at last excluded 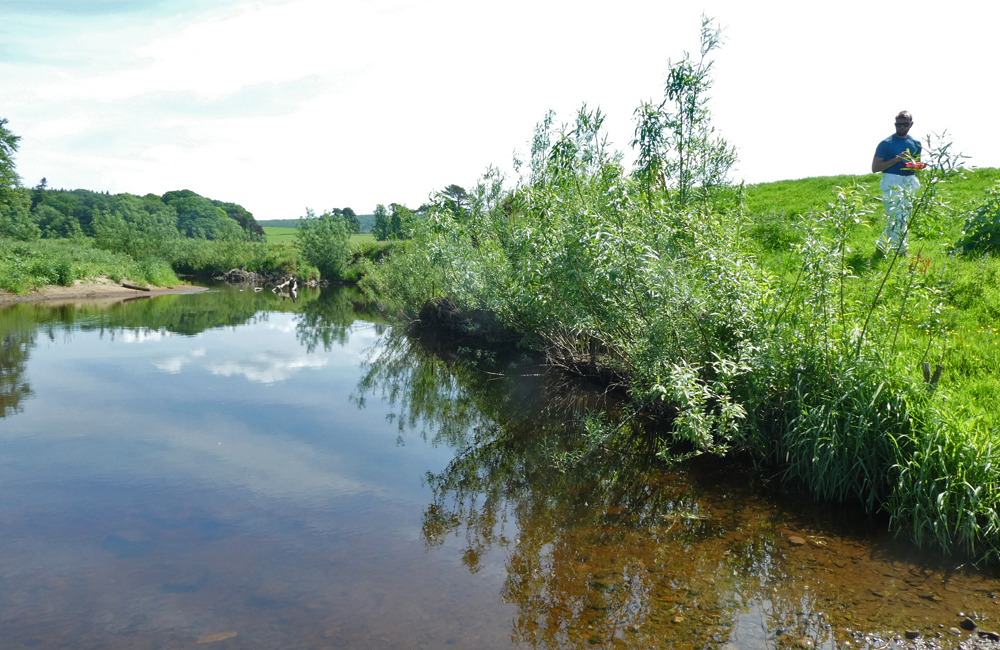 June 2018 and the lower site willow spiling is doing well. Fish have improved cover in these pools since they now have shade and overhanging branches (and roots) to hide under. We saw birds nesting in the willow and of course improving river habitat also improves biodiversity. 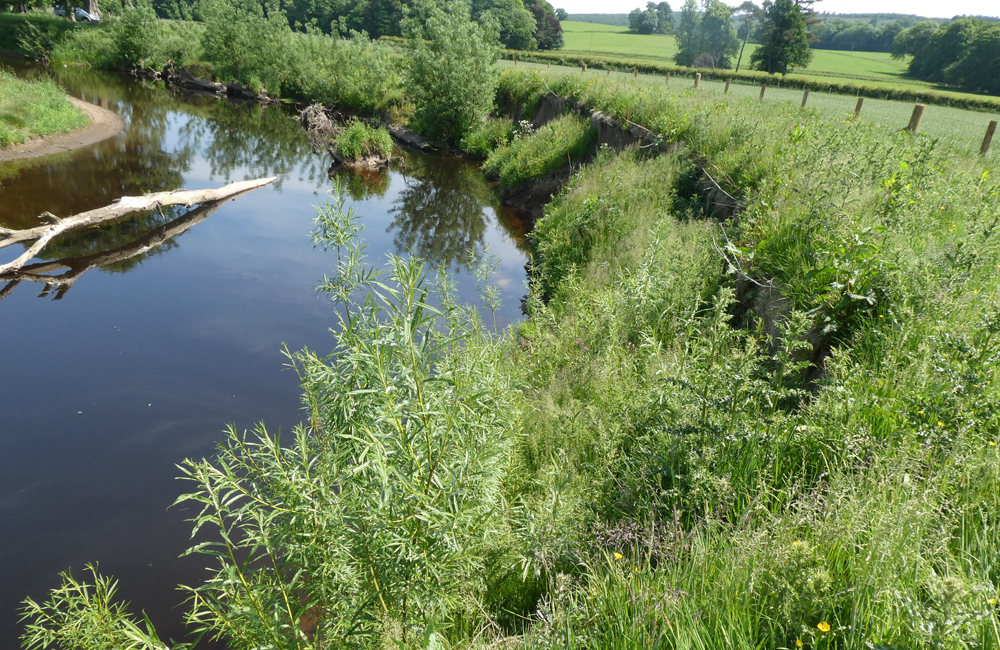 The contrast between April 2016 and June 2018 was tremendous but only really became apparent after the fencing was erected. Compared to the situation of 2011, this site is unrecognisable 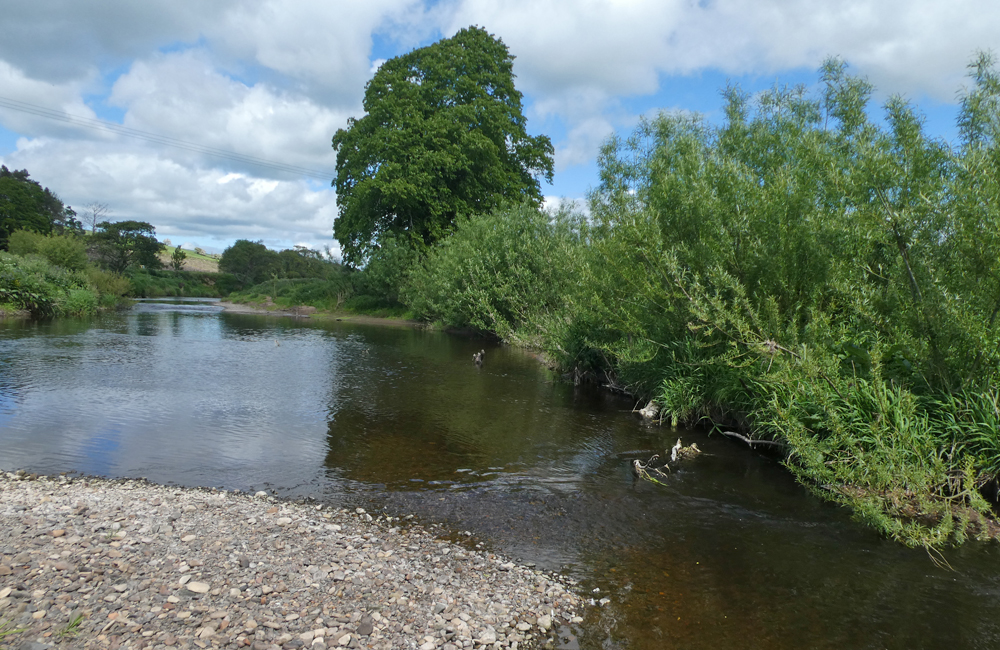 Looking upstream at the upper site in May 2019. What an incredible transformation to both riverbank and the fish habitat 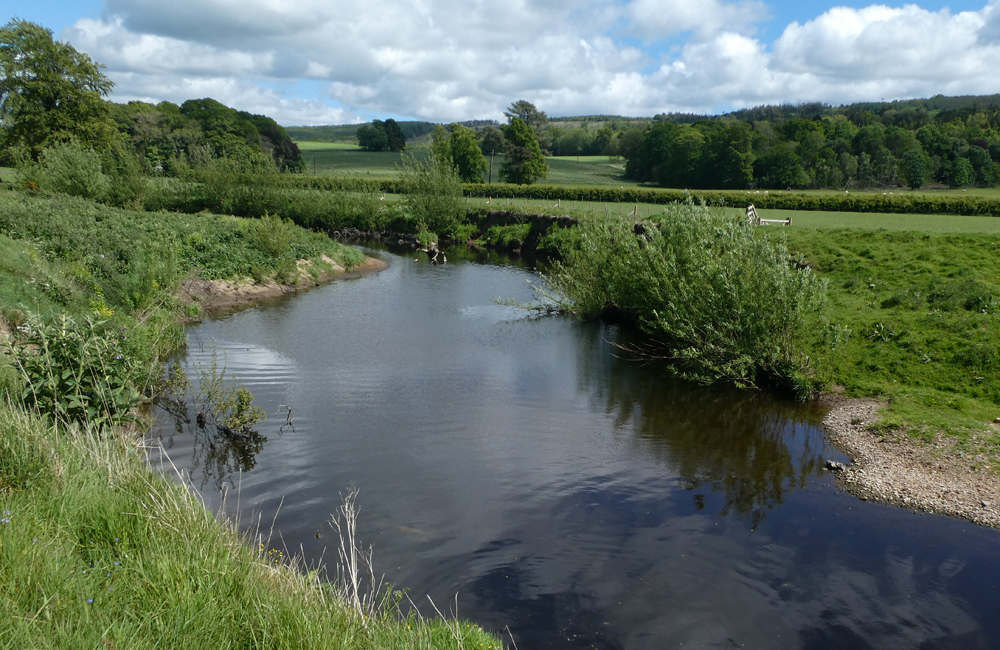 No erosion to be seen in May 2019. The bank is fully vegetated and there’s tree cover developing that will provide lies for fish, but will also help defend against climate change. Silt load in the river has effectively been reduced. 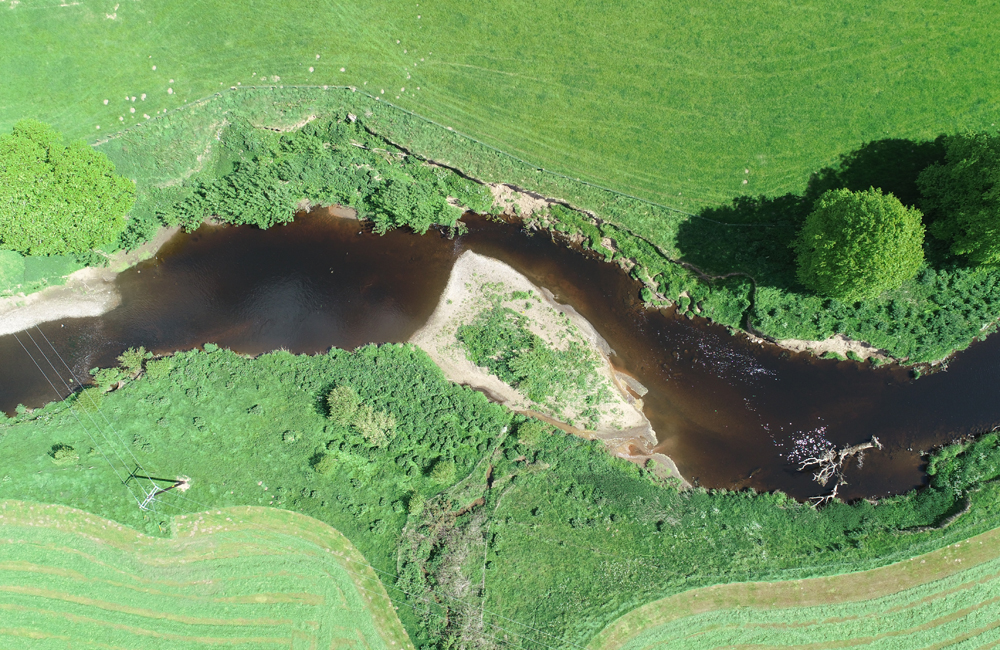 An aerial shot of the upper site. We could still do more here but it is developing well. The dry bank submerges in spate conditions. This image was taken in the drought period of May 2019. This entire project was completed on a shoe string budget through the commitment of ART, landowner, the DSFB and external funders. The purpose was to demonstrate what could be achieved by using simple methods over a short period of time. With more funds available, we could do much more! The bed still has silt deposits on it and these come from bank erosion upstream where we could focus our attention in future. 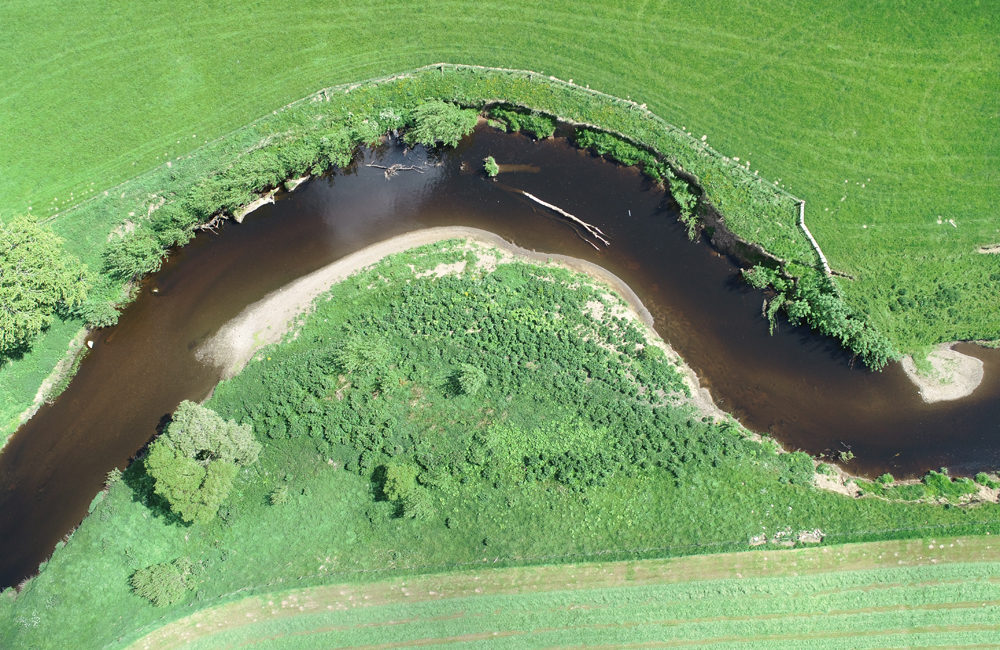 The lower site from above again in May 2019. The bank has transformed and now entirely stable without erosion. We could boost a section here or there but this should heal naturally in time. Livestock exclusion was key to achieving success. Indeed, fencing would often prevent erosion happening in the first place.  Silt and fine sediment still coats the bed and comes from upstream. The more erosion problems we can address, the less silt issues we will face and that should mean more fish spawning successfully in our rivers and improved water quality.