Wednesday and Thursday of last week saw us complete the timed electrofishing on the Water of Girvan and River Doon. High water levels over the last 3/4 weeks prevented us from completing these main river sites. 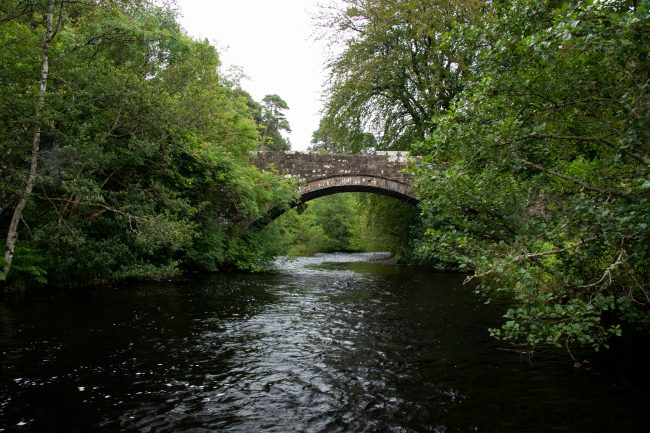 The humpback bridge in Craigengillan Estate. Despite the modulated flows from Loch Doon Dam we’ve had to wait a few weeks to conduct these surveys effectively and safely. 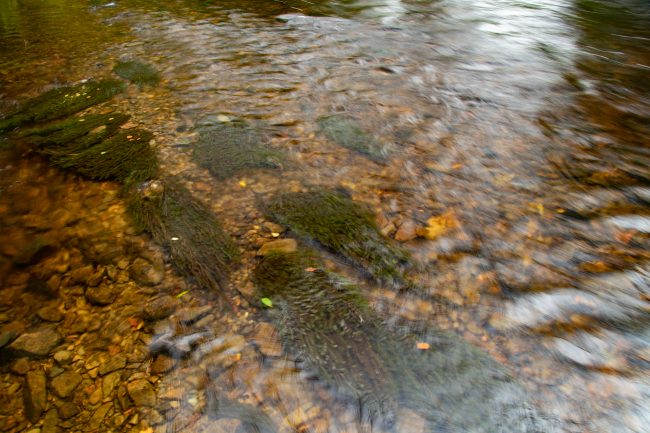 Fry numbers appear to be down on previous years averages. However we have seen very good numbers of parr, despite these surveys not being designed to assess salmon parr numbers (different habitats niches etc.). Numbers and condition of salmon parr were good indicating survival from fry to parr over last winter was high and of course that the feeding has been excellent. We also noted how large some of the fry are in these lower river sites, again indicating how good the feeding is. 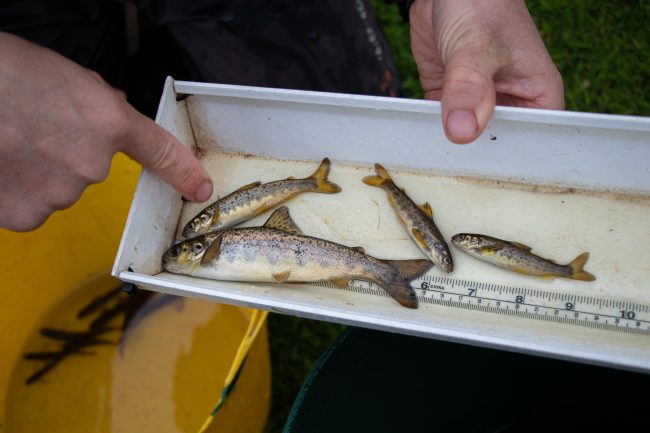 salmon fry and parr from the River Doon, in the lower river we have been recording some very large fry. We take scales of some fish to verify that we are correctly ageing fish. 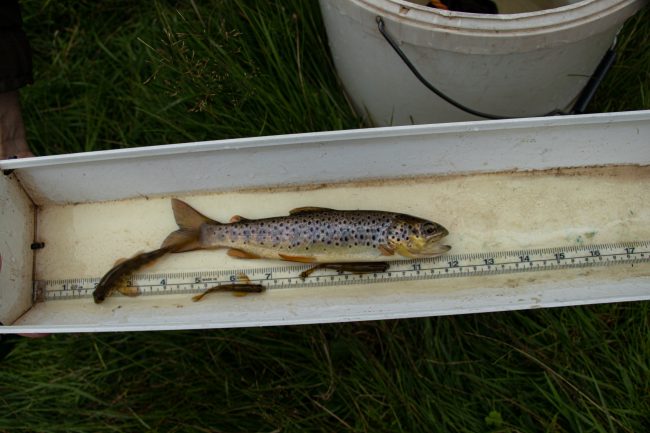 A long lean trout which came from under some large woody debris at the top of an island. Large woody debris is a vital component of river systems offering cover for fish and food for invertebrates. 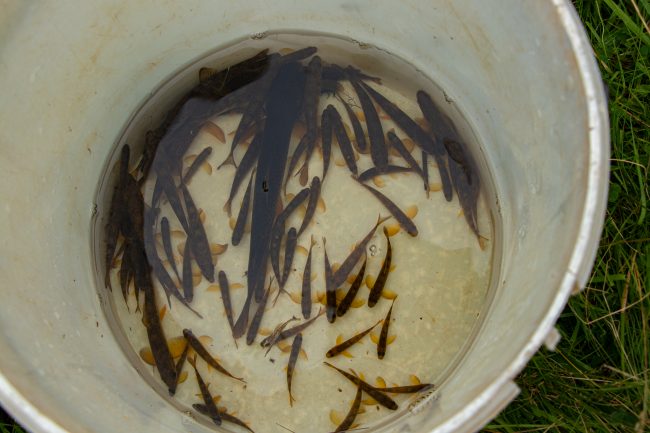 A bucket of fry from Ness Glen on the River Doon, compared to the fry at the bottom of the river these fish are very small, but more numerous. A combination of water temperatures and poorer feeding account for the difference in size. These fished probably emerged from the gravel later than the downstream counterparts. 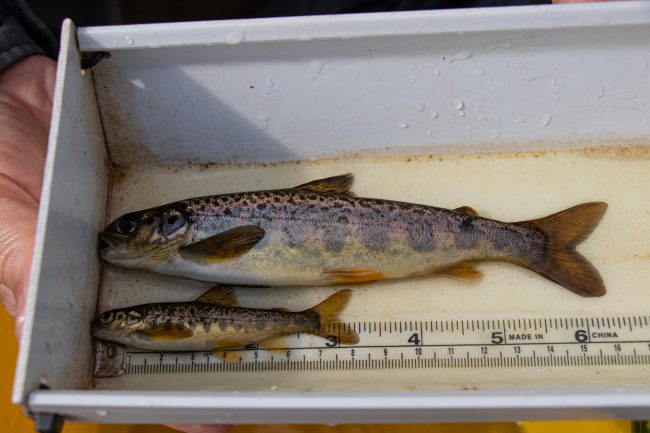 A comparison between a large salmon parr and salmon fry.

We happened across an adult salmon (mostly likely a grilse) in shallow streamy water near Dalrymple. Lying in only eighteen inches of water under trailing weed this fish must have thought it was as safe as houses, that is until it got a tingle from the electricity. After which it flew downstream out of our way! We also so a fish splash downstream of Dalrymple. 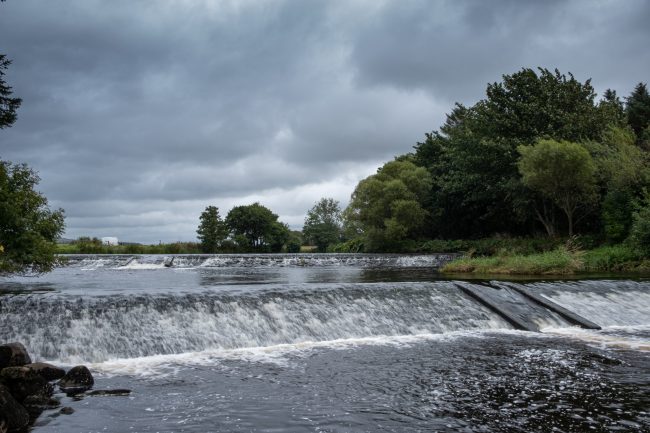 Girvan Dykes with rather foreboding clouds rolling in on a blustery afternoon. 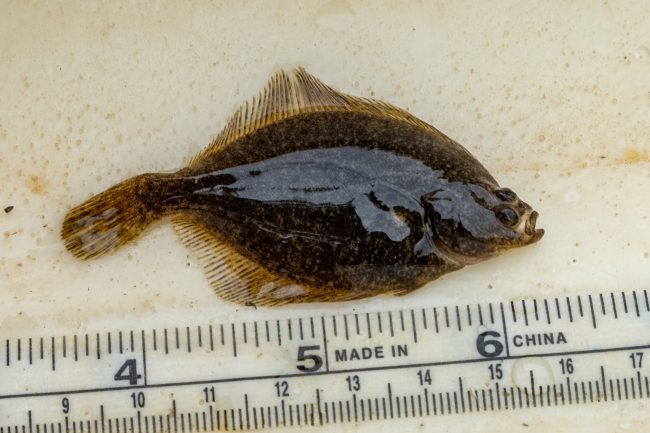 A flounder from below the Dykes, these little flatfish frequent both freshwater and saltwater environments. The weirs prevent flounder from migrating any further up the river. 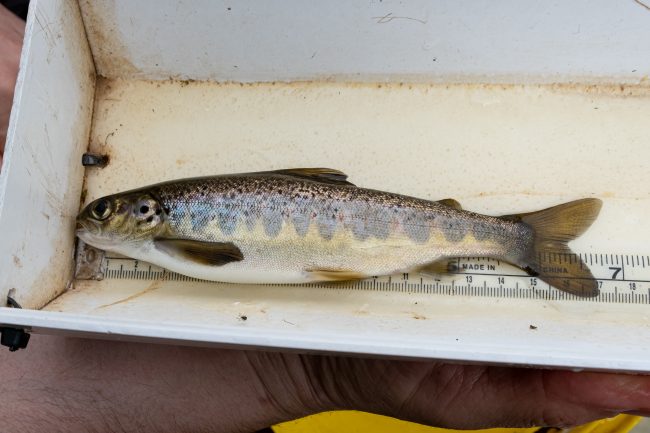 A huge salmon parr from the lower Girvan. Imagine this scaled up to a twenty pounder!

← Erosion at Galston on the Irvine Annick Water Surveys throw up a surprise. →