A huge thanks to two of our supporters, Gilbert Browne from Girvan and Fiona Sinclair from Dunure who have over the years donated trees and shrubs to the Trust for our conservation work on our rivers.

Fiona expertly removes native trees and shrubs which have self-seeded and grown in her garden and either pots them up or gives them over to us as bare roots. Ash, willow, alder, sloe and hawthorn are just some examples of the species that we have received and will be used on riverbanks. Today she dug up some holly which is a species we are lacking in our nursery so hopefully we can bring them on and get them planted in a few years time. Fiona also donated some Mycorrhizal and hormone which will be extremely useful for propagation and root development. 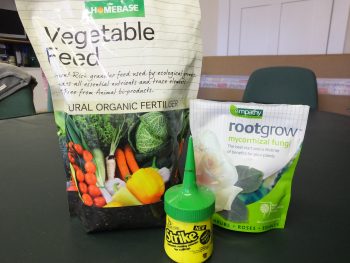 Feed, Mycorrhiza and growth hormone for planting up 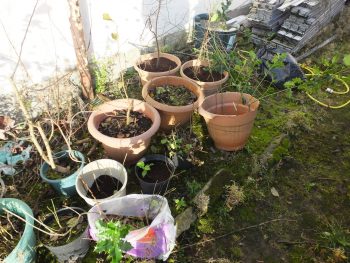 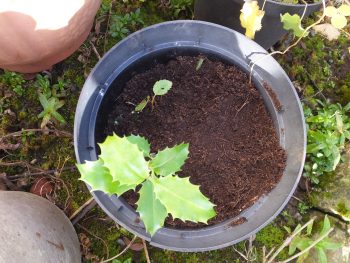 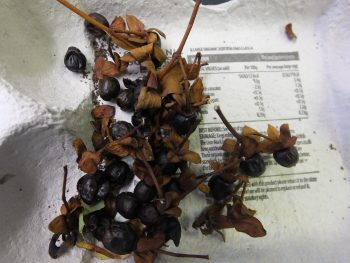 The native shrub Tutsan (Hypericum androsaemum) which produces these black fruit and seeds. It is quite rare in Ayrshire.

Fiona also gave us some tutsan (Hypericum androsaemum) seeds which she gathered locally. This is a shrub that I’m not familiar with but is native to Scotland. Whilst not a species we would actively seek to plant on riverbanks we can still use them on bank-tops in fenced off buffer zones along watercourses to mix in with the wild plant species that emerge when cattle grazing stops. It is important to have a mix of species along the river corridor that contribute to increasing biodiversity rather than always relying on for example willow or birch. 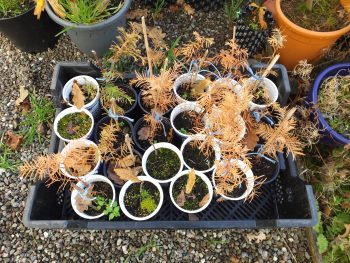 Gilbert has been a great supporter of the Trust over the years and as well as planting up his own stretch of water on the River Stinchar he often drops off some young trees which he has propagated himself from local stock. A few weeks ago he dropped off some Scots pine which will be useful to plant out on rivers. Once again it’s not a species that is traditionally associated with rivers but the odd native pine planted in amongst alders, willows, oaks, birch etc will be beneficial to the overall health of the river and landscape in the years to come.

Also thanks to Carlos Van Heddegem for handing in some wild cherry seeds which we hopefully propagate over the winter.

Although these seem an insignificant number of trees in the grand scheme of things, in terms of the number we currently plant out and the number we would like to, they nevertheless are important. It takes time to gather seed, propagate and grow trees from scratch so when we have volunteers helping us out it is very much appreciated. Yes you can buy buy bare roots but you cannot be sure where they have came from (abroad and possible disease/pests risks?) or whether they will adapt to local conditions. Additionally, they cost money! Sourcing seed from local trees gives us this advantage and you are preserving the local genetics that have evolved over time.

It is also worth pointing out that planting schemes along rivers do not have to be high density. We often see planting schemes along burns and rivers where too many trees have been planted in one area and rather than provide the desired dappled shade light effect, they entirely block out sunlight reaching the watercourse which can have a negative effect on river ecology. Yes you need to account for losses over time but if the trees are not manged, thinned and allowed to have space then it can become detrimental in the decades that follow planting. Therefore, planting does not have to be regimented and high density after all that’s not what nature is like. More important is where in the catchment the trees are planted  in order to to get maximum benefit from they ecosystem services they provide and the protection they can offer to mitigate high water temperatures as a result of climate change. 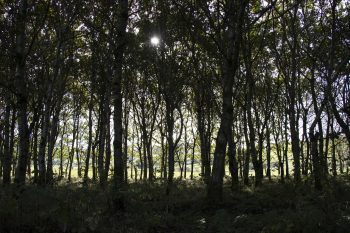