The third week in July is the week we always commence timed electrofishing surveys across the 4 District Salmon Fishery Board controlled rivers. We do this as part of the work we deliver for the DSFBs annually and it’s a rapid assessment of spawning success as it is designed to be a fry survey. We do capture parr too but the results from these surveys are only analysed using  the fry data.

We started last week on the Ayr but water levels were rising and we ended up leaving this river until water levels drop back after only managing to fish the 3 upper sites. 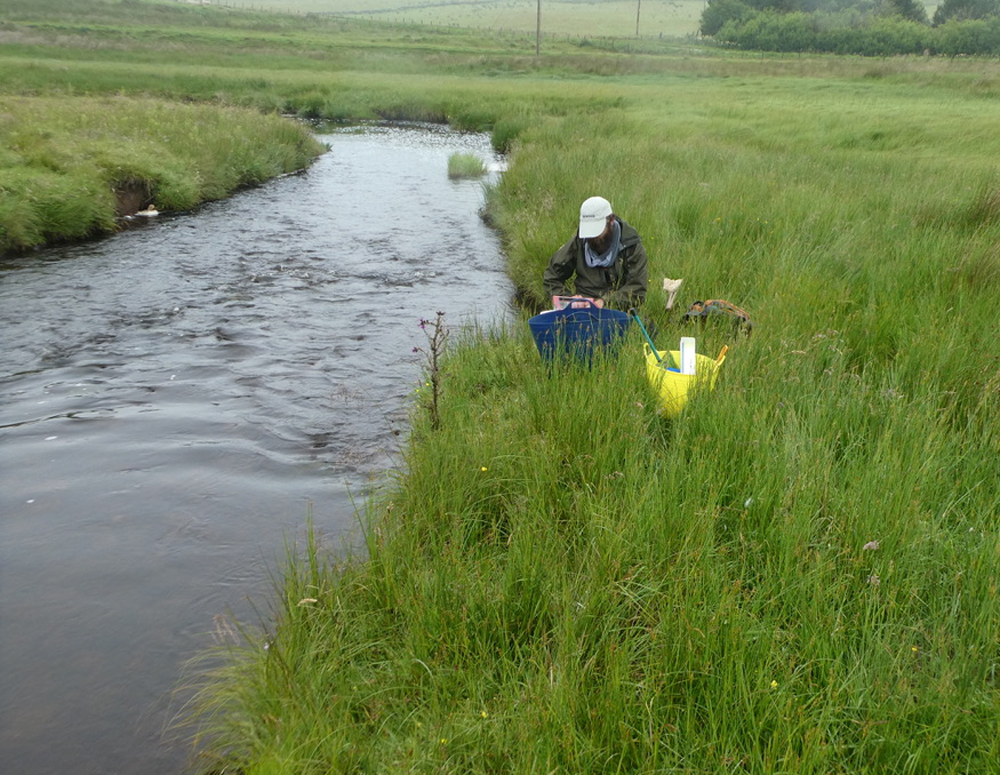 The site on the Upper Ayr that was so good just a few years ago before iron rich surface water from the Spireslack Opencast site was diverted into the river immediately upstream of this spawning area. It now produces just a handful of fish each year. 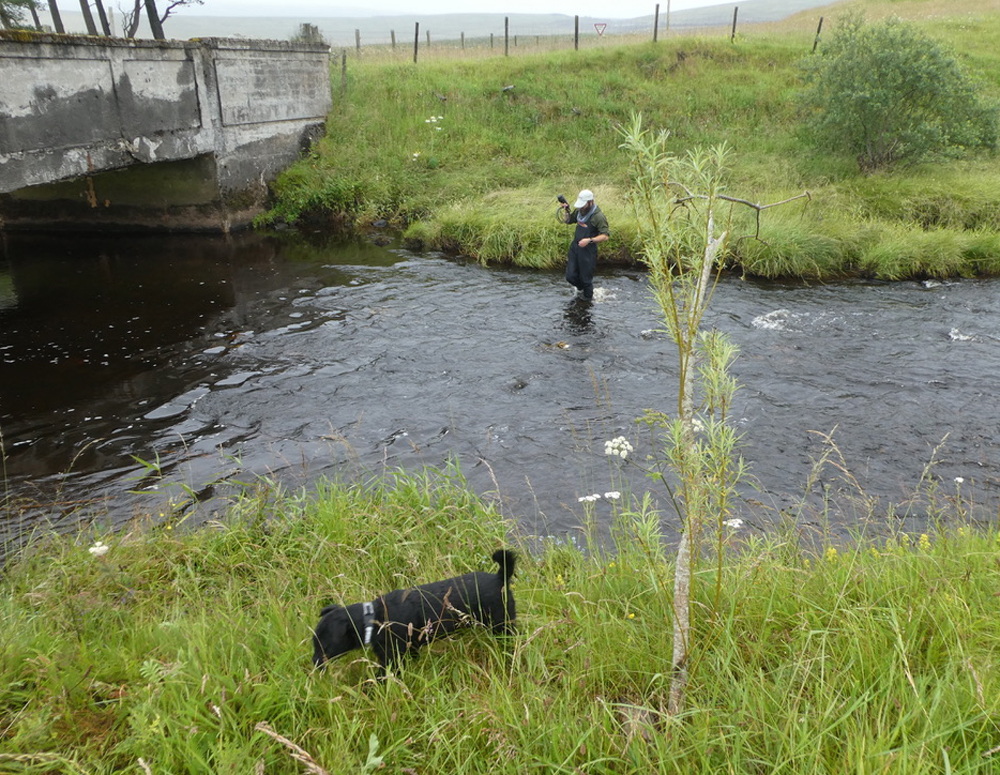 Struan taking conductivity readings downstream of Nether Wellwood Bridge and the Powharnol Opencast Pond outlet. Again we consider this type of input to have damaged what was a very important spawning habitat. Productivity is a fraction of what it was when I first surveyed this site back in 2006. The willow tree in the foreground is one of many cuttings we rooted and planted at this site to provide shade and cut erosion

By the time we reached Glen Logan, I felt it was becoming unfishable and would have been unsafe to continue. We redirected back to the Stottencleugh where we managed to find some other work that needed doing. If you read our previous post, there’s a video link to a film we shot that day where we assessed hatchery stocking success in this burn.

From there we headed to the Doon on Friday and fished all but the upper two sites near Craigengillan. We have additional work to perform at these sites and decided to delay these until later in the month. 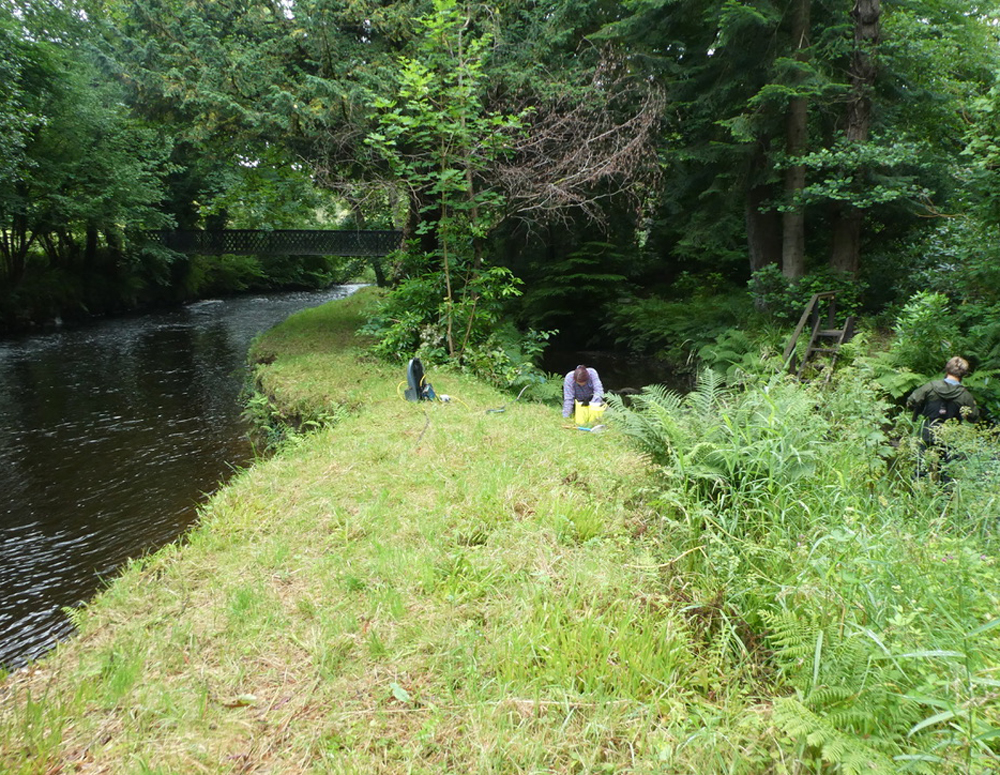 Not ideal fry habitat at Auchendrane on the Doon but that’s the nature of timed surveys and we rely on averages across all sites to determine the result. 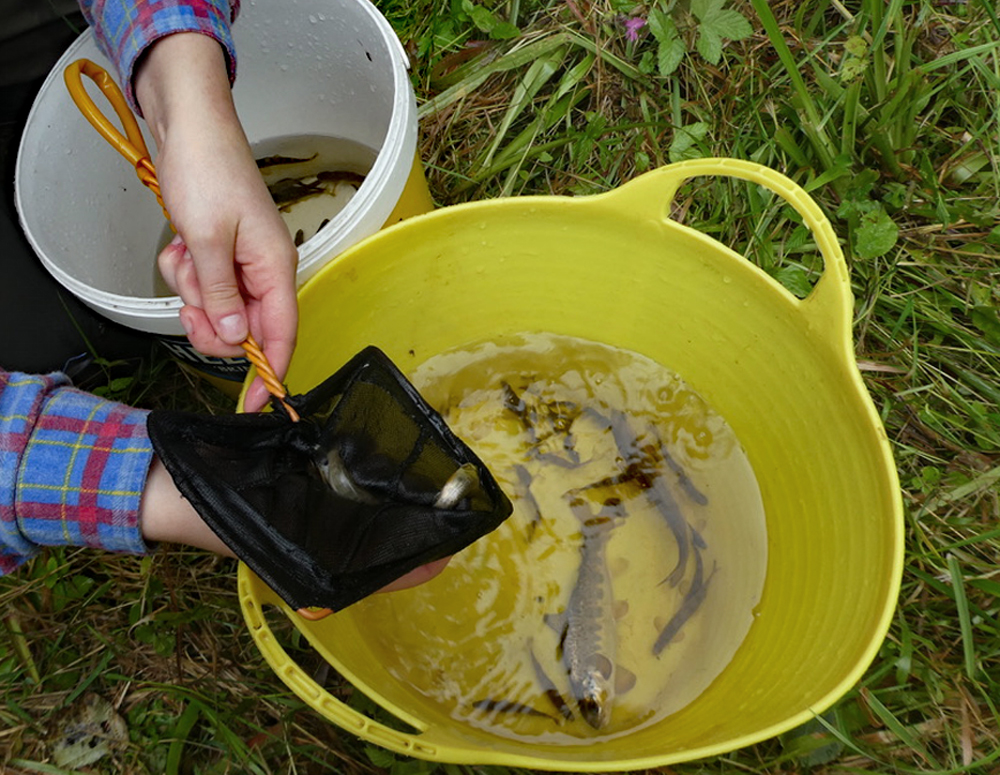 Despite the unsuitable habitat, w still managed fry and a few parr. Just look at the size and shape of the parr in the bucket….what a lovey fish! 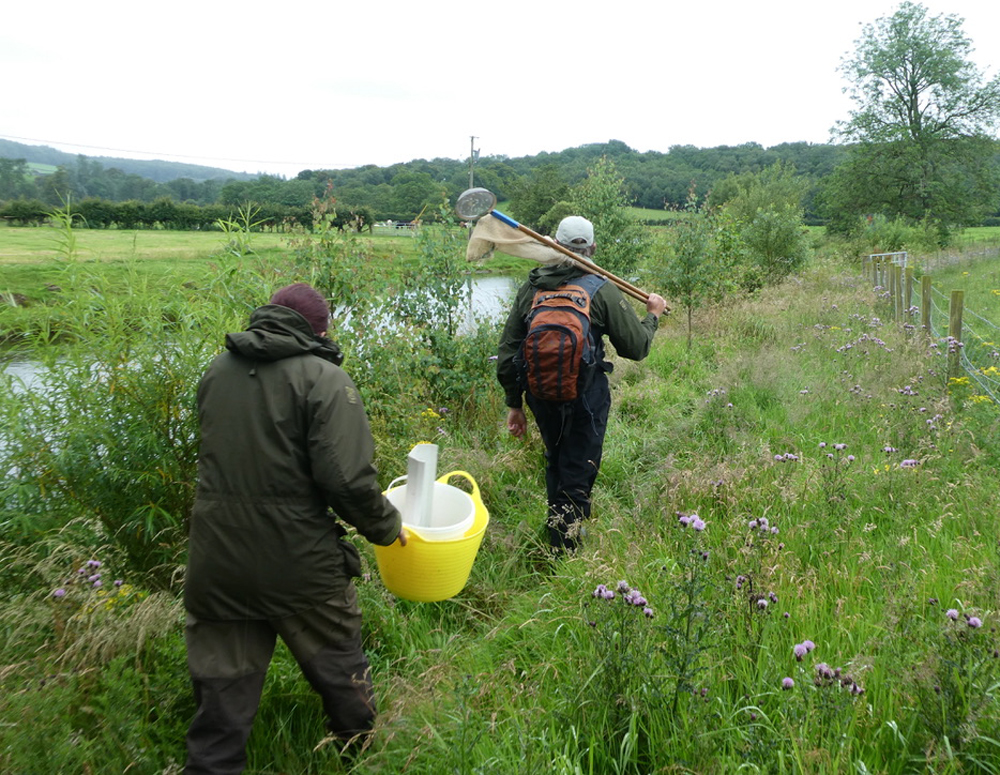 Walking downstream at the Homes Farm beat where ART and the DSFB arranged and helped fund fencing back in 2015 to keep the cattle out. These banks were badly eroded by livestock but look at them now. We planted trees 3 years ago and they are doing very well. In a few years time, they will offer shade to the river and help prevent erosion. This is a great result so far and we will be adding to the number of trees next winter.

Today we started at the Girvan before heading to Turnberry to perform a fish rescue on the Milton Burn. We then headed back to the river to continue timed surveys working upstream as far as Mekland Bridge by end of play this evening. 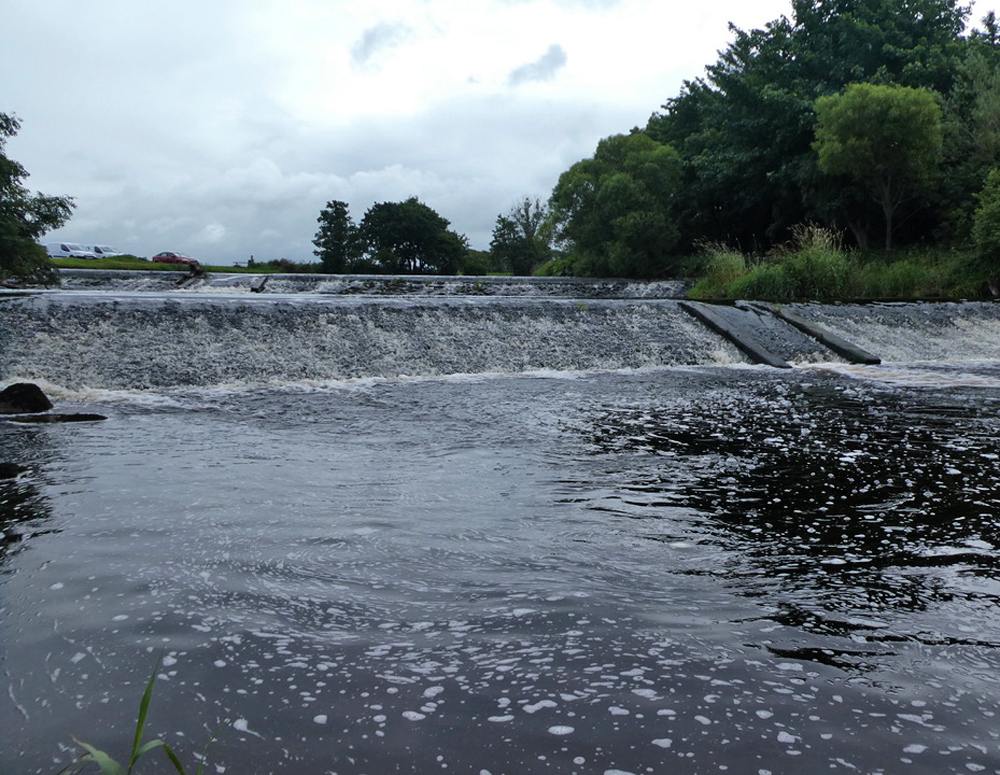 Girvan Dykes where we installed 2 fish passes back in 2011. These have been instrumental in getting fish up the river rather than them being held up in the Miller’s pool downstream. We are hearing that there has already been a a decent run of fish into the Girvan with some large salmon being seen and caught. 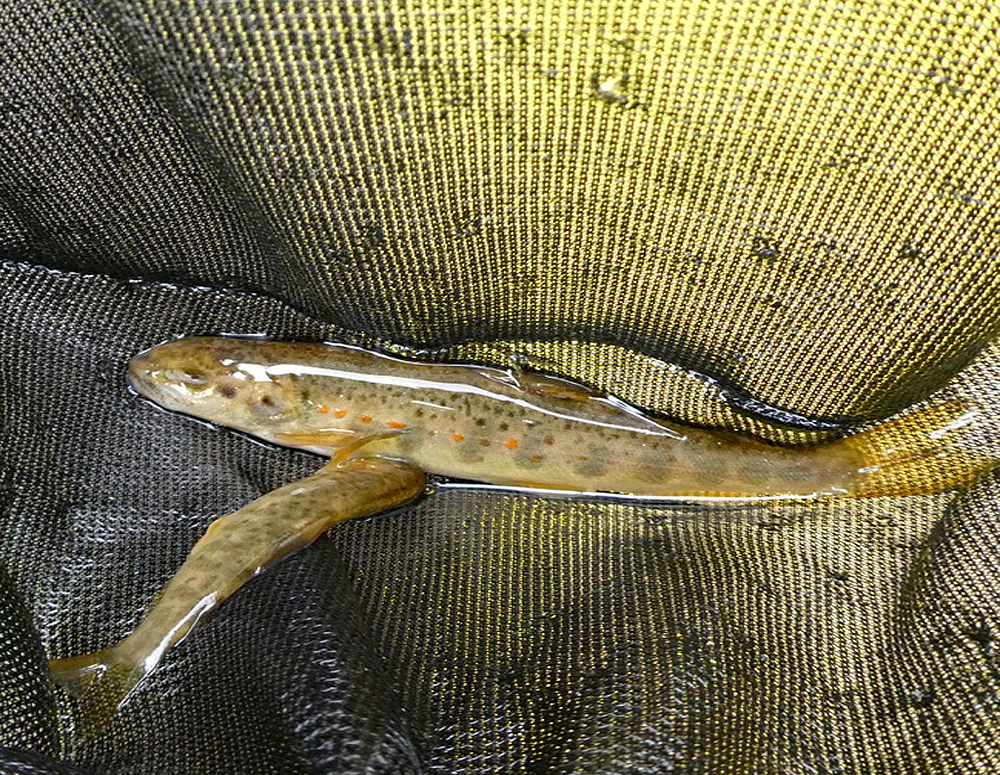 A one eyed parr caught at the Merkland Bridge site. This parr was rather emaciated and much smaller than the others from this site. It was only when I flipped it over that I saw it was missing an eye and this explains why it wasn’t doing as well as the rest. None the less, it has survived thus far and may eventually return from its sea migration with any luck.

We were encouraged by the results we’ve seen in the lower Doon and Girvan with improvement over recent years but it’s too early to say more as all the assessments have yet to be completed and analysed.Tomorrow we should manage to complete the Girvan and Doon sites and on Wednesday we will head for the Stinchar valley. Once these sites are completed we will head back to the Ayr and Lugar and finish off there.

Due to Covid 19, we are restricted in who we can take out this year and we’ve only just managed to return to a full staff compliment after being forced to furlough staff for some time.  While we have many offers of assistance, it is an exceptional year and we can’t really take up those offers of help at the moment. I hope our readers will understand but once restrictions ease further perhpas we will be able to return to some sort of normality. We were able to accept help from my daughter who assisted with the Ayr and Doon surveys while she is back home from university. It’s good work experience for her and I’m pleased to see her taking an interest.