The catch data from the 4 DSFB controlled rivers has been submitted for publication in the FMS annual review now.
We can’t complete this for the Irvine and Garnock as we don’t receive all the catch returns which is unfortunate.
These totals are based on Salmon reported at the time of writing. Incomplete returns on some rivers may lead to updates in future should they come in.
Ayr reported 446 (incomplete)
Doon reported 299
Girvan reported 161 (incomplete)
Stinchar reported 255 (incomplete) 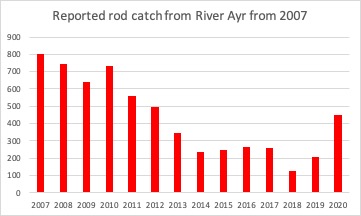 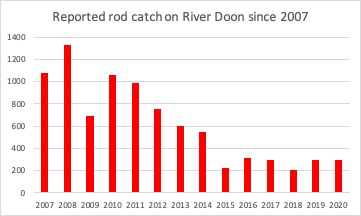 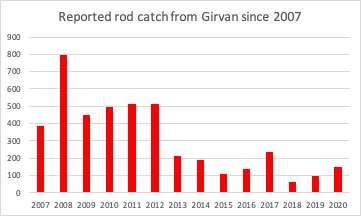 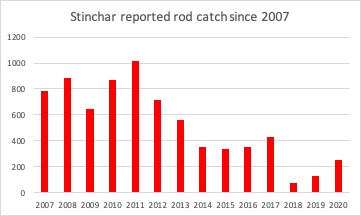 These charts show a very similar pattern (almost identical since 2011) of decline across all these rivers. This indicates that there are common factors in the marine environment affecting the number of returning adults and catches. That said, we can still improve the freshwater environment to help boost productivity. There are plenty of issues yet to be resolved. This has to be the focus for the Trust, Boards, Angling Clubs and anyone wishing to help the species.
← Scale Reading Analysis of Rod Caught Farmed Salmon in 2020 River Doon District Salmon Fishery Board Meeting March 2021 →