It’s a case of weir today and gone tomorrow! As you will see from the pictures below, Darvel’s crumbling weir has now been demolished. 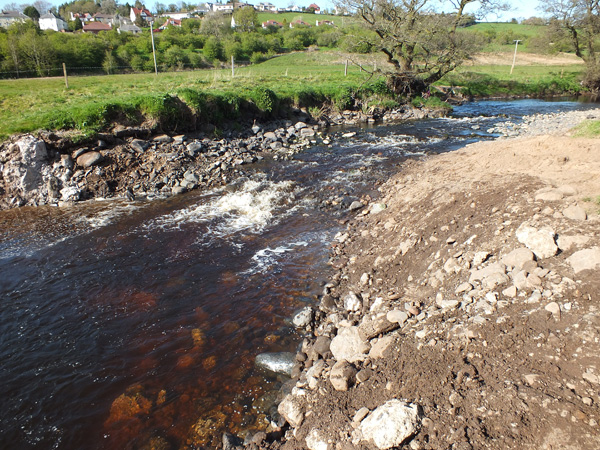 The new run into the old weir pool. This looks great (from both a conservation and an angling perspective) 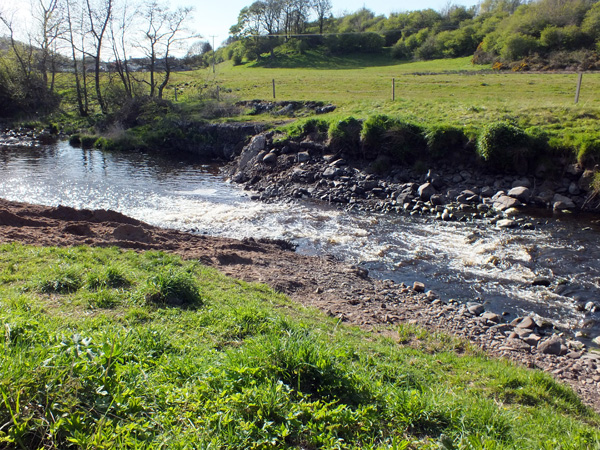 To say this was a Darvel Weir is perhaps misleading as it was located between Newmilns and Darvel forming the boundary between the two town’s angling club waters. I don’t suppose it matters anyway as it has now been demolished and no longer poses a health and safety risk to anyone. SEPA allowed Lanfine Estate to demolish the weir after it became undermined a couple of weeks ago and there was a serious risk that someone could become trapped and drown under the ‘bridge’ type structure that remained. See older posts for photos of the dam soon after it became undermined. 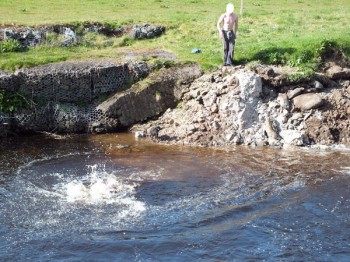 Going down for the third time. Only when he surfaced did I realise he was in trouble

When I visited the weir this evening to see the final results, a young man was pushed into the water and nearly drowned. His friend thought he could swim, so was just having a laugh but things rapidly took a turn for the worse when his head bobbed under for the second or third time (it was only when I saw the look on his face as he surfaced that I realised this was serious).

As I  was turning towards the van for a lifejacket, he managed to find a footing and clambered out. I was relieved as I though I was just about to get wet! He sat down, exhausted and obviously in shock for about 5 minutes as his friend laughed it all off. I suggested he should go for swimming lessons to which he relpied ” I can swim, but I couldn’t because it was so cold!” I think this is a lesson for us all, especially those wading. Splash out on a lifejacket, it may just save you one day. Just imagine if this had happened above the old weir yesterday. Well done to all involved for getting rid of  it so quickly.

Once the next big spate redistributes the loose substrates, it will be interesting to see things develop and how angling improves in the area. I’ve no doubt that this will be a significant improvement for the fish that will have free movement to their spawning grounds. Next weir upstream is the weir upstream of Ranoldcoup Park which is a different kettle of fish altogether. Perhaps we should try once again to do something with the fish pass there. 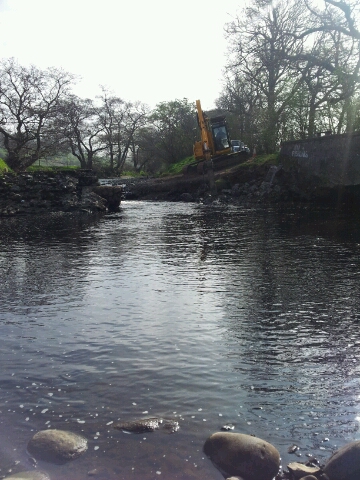 Jimmy Mair from Darvel sent me this photo of the machine in action. I wish I'd been there to see this happen. 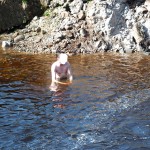 Back on his feet after thrashing and splashing his way to the bank....doggy style