We were asked to undertake a fish and habitat survey of the Upper Garnock and this morning we headed there to see what we could find. Since joining the Trust in 2008, I haven’t personally surveyed any Garnock main stem sites other than during our education projects so this was all new to me. We are keen to undertake much more work on both Garnock and Irvine but without funding this just isn’t possible. When opportunities such as today’s survey arise, it gives us an opportunity to increase our knowledge and update the data we hold on the fish population.

The first site visited this morning was approximately 1Km upstream of Kilbirnie. The river is bouldery with few obvious spawning opportunities for trout or salmon but the results indicate that the fish manage to find suitable substrate somewhere.  Both trout and salmon were recorded in reasonable numbers (I haven’t entered the data or analysed it yet so this is just my opinion based on what we find elsewhere rather than confirmed fact). I expect the trout results may prove to be excellent whilst salmon will somewhat lower but certainly not bad. Three run fully quantitative assessment takes a while and it was lunchtime before we finished this site. 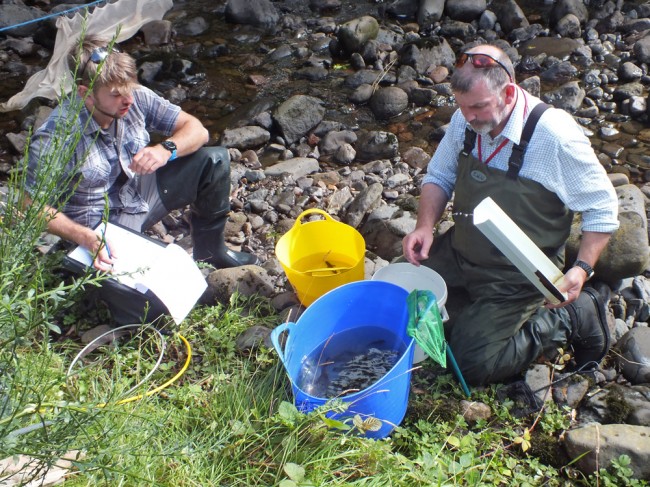 Recording the catch at the first site of the day 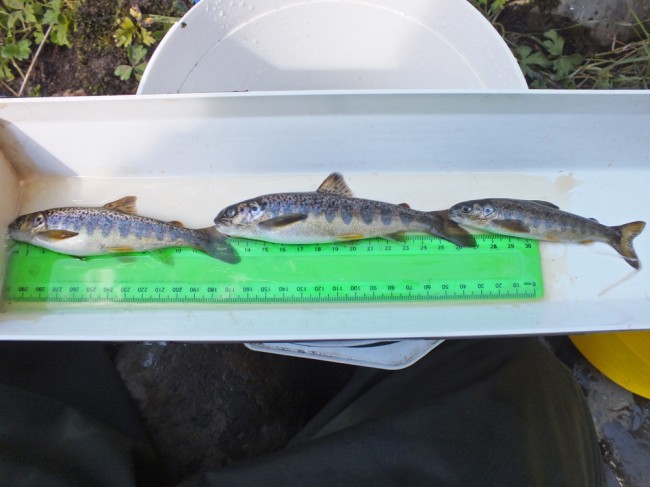 We headed upstream to Garnock Castle after a quick sandwich and scrambled down a steep bank into Glen Garnock. We were upstream of the falls marked on the map but found several cascades and another small falls that all looked passable for migrating fish but the cumulative impact is bound to stop some salmon towards the end of the year. 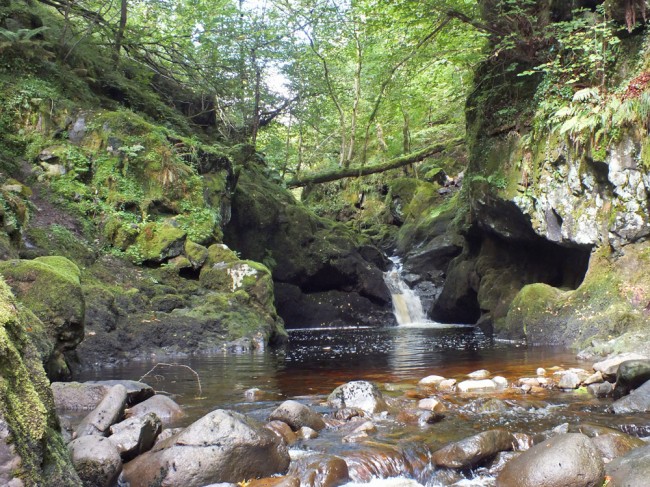 Eventually we reached the pipeline weir at the top of the Glen and decided to fish a site about 400m upstream. Having read the habitat report from 2005, and on the information discussed with SEPA, I understood that  the upper limit for migration was likely to be either the falls (marked on the map) or the weir. The site was once again very bouldery with little spawning opportunities obvious. Trout were abundant and although small, there were plenty of them. We recorded the catch and during the process I was amazed to find a single salmon parr. We completed the second and third run through the site but no more salmon were found. 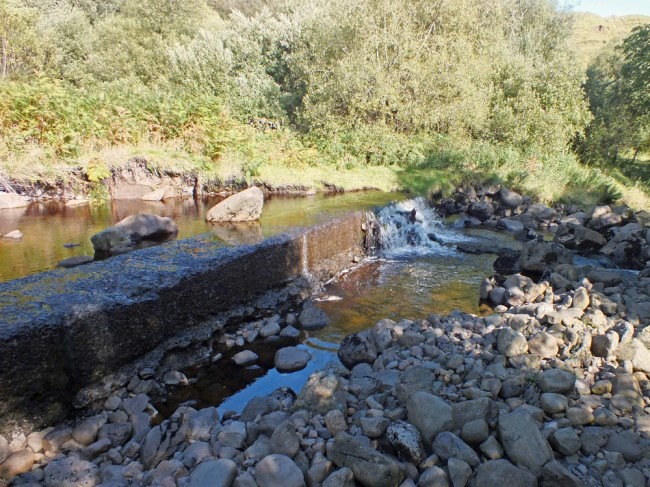 Another tricky obstacle for migrating fish. In high water, fish will be able to navigate the end of the weir where the photograph was taken 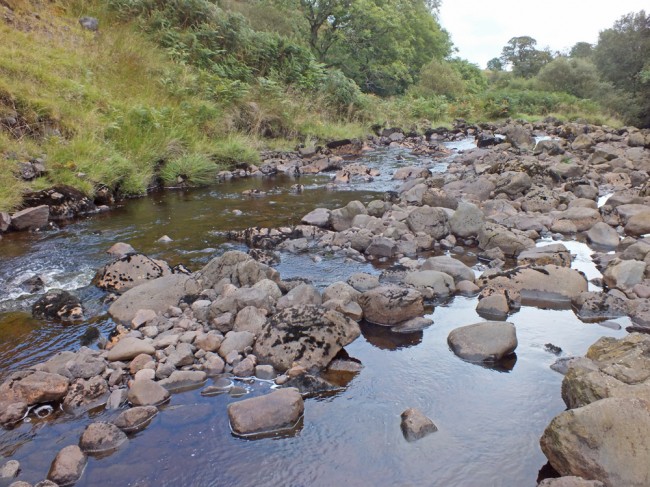 The second site where we found lots of trout and a single salmon parr. The river is extremely bouldery, steep and lacks gravels and smaller substrates in this area. It must be a raging torrent in high water 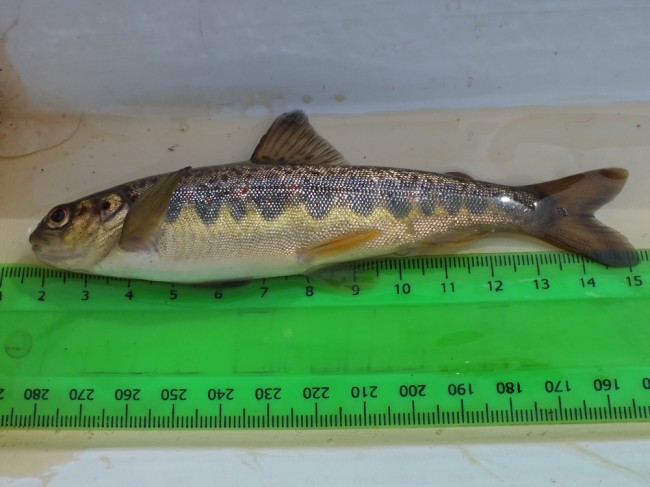 The single salmon parr found at the second site 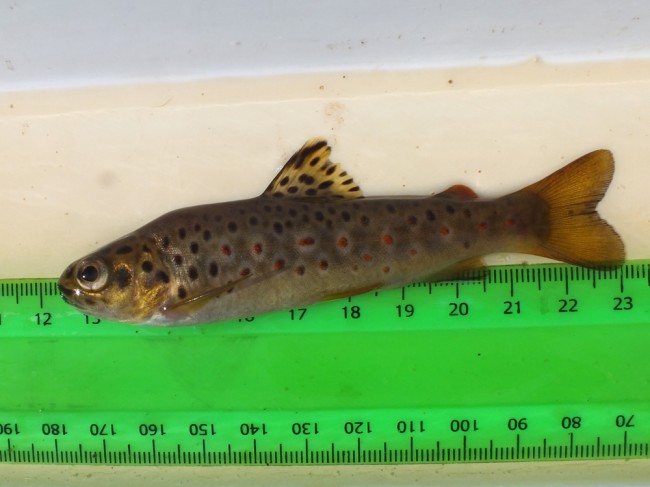 A small hunchback trout that we found. We find deformities aren’t uncommon in isolated populations

We had planned to fish another site somewhere downstream of the weir on the way back to the van to see if  salmon were present below but as we now knew they managed to reach further upstream, we changed our plans and will add an extra site into the upper survey tomorrow if the weather permits. We couldn’t not have a quick look below the weir to see if  there were more salmon there but after a very quick run through a few likely spots, we found only one parr and a few trout. Again the habitat isn’t ideal for spawning but at least fish are managing. 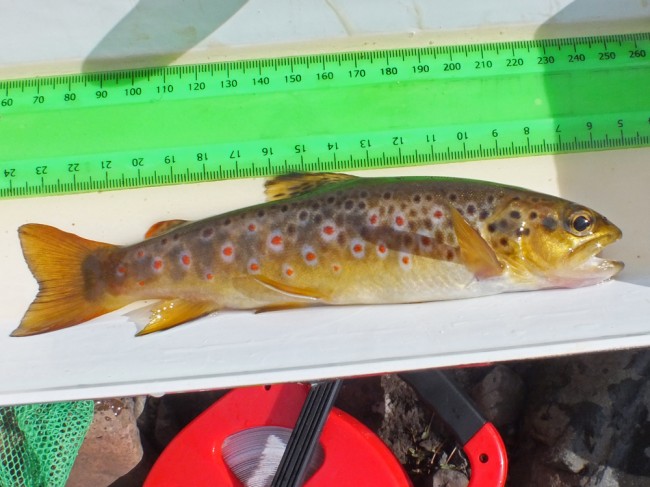 A lovely wee golden bellied trout. The edge of the fins were white and we often find this particularly in upland trout populations.

We headed back to the van satisfied that we had learned something new and with the knowledge that tomorrow should again be interesting. It is always enjoyable to visit new areas and find something new or previously  unknown. It is a lovely we Glen and well worth a walk to Garnock Castle for the views. I’ll post more on our findings tomorrow.