We’ve been kept busy at the smolt trap over the last couple of days. With many hundred passing through now we’ve been starting the first mark, release, recapture trials to assess the percentage of the migrating population passing through the trap. 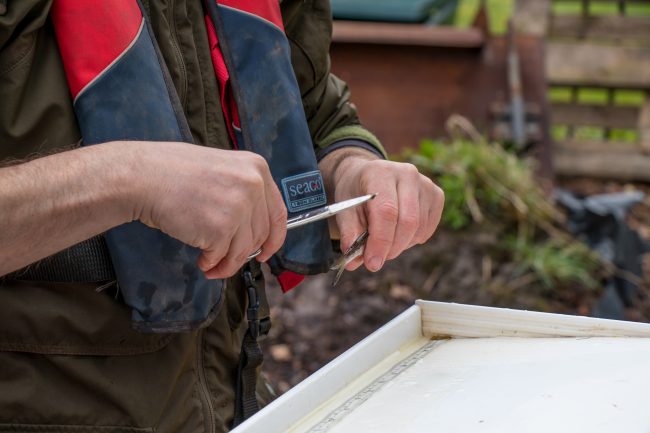 These fish clipped fish are released upstream at Sorn, approximately a mile and three quarters upstream of the trap. In doing so we will gain an estimation of the number of fish using the trap during downstream migration. There are only two other options for the fish, the fish ladder or the dam itself. In higher flows fish may go straight over the dam itself and we’ve seen gulls sitting on the dam each morning. That isn’t to say they’re there for smolts (they’ve been preening in the freshwater) but being of a scientific mind I don’t believe in coincidences. With a large enough sample we’ll have a better idea of trap efficiency at the end of the smolt run. 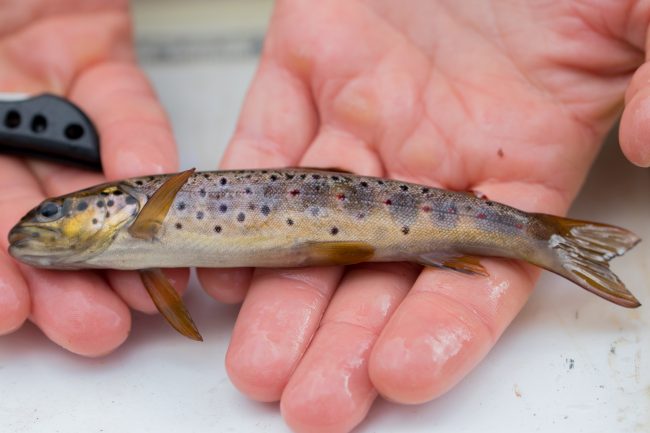 The occasional trout parr (river resident i.e. not a sea trout smolt) has been finding it’s way into the trap. These fish are measured and released to continue there internal (river) migration. This particular fish was quite lean but otherwise very prettily marked. 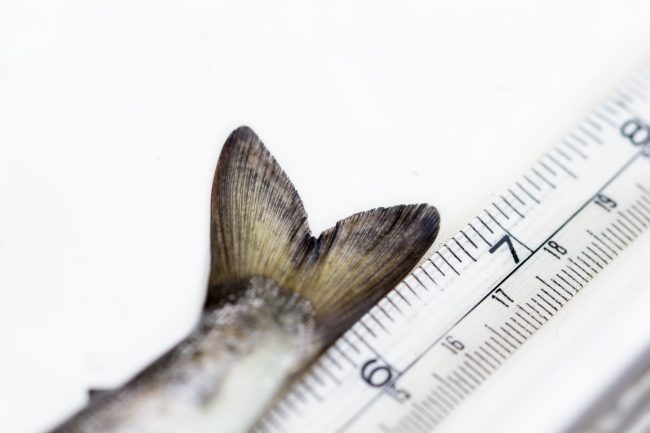 A sure sign of smolting….darkening fins. The outside edge of the fin is visibly darker than the rest of the tail, before long the tail fin will become almost entirely black as the body turns very silver, ready for entering the marine environment. The transition from parr markings to a silver body happens as a result of guanine crystals being laid down in the fishes skin. The fish will become more streamlined during the smolting process, over the next couple of weeks we should be able to post pictures showing ‘true’ smolts.

Predator damage thus far has been low but see one of today’s photo’s for a smolt that has escaped a predator. 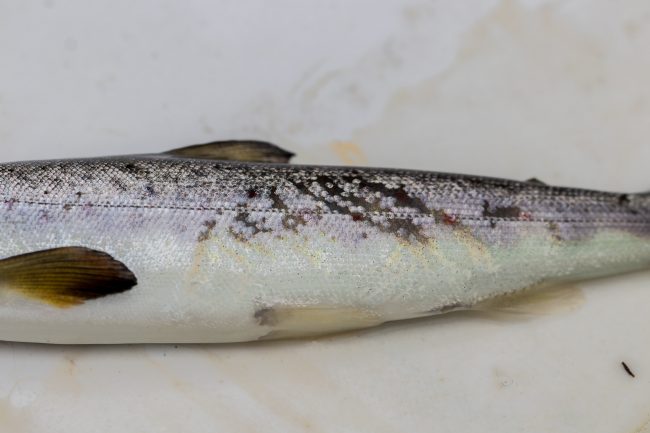 This fish was one of the lucky one’s who made it out of the mouth of a predator. The triangular markings and rake marks indicate that this was a sawbill (merganser or goosander). When you look at the orientation of the mark this fish was grabbed from beneath as the apex is at the dorsal side of the fin. Both species are proficient underwater swimmers so this type of marking isn’t a surprise. Note the darkening fins.

We’ve been seeing some sizeable trout smolts too.

Despite the typical brownie appearance this is a sea trout smolt. Typically trout smolts migrate before salmon smolts but we are still seeing the odd trout coming into the trap. We scale these fish to identify there age as we lack data pertaining to sea trout. I don’t have the image of the scale to hand but this fish was a 3+ (0+ denotes a fish in it’s first year of life).

With a rise in water levels underway as I write this we could be in for plenty of smolts tomorrow morning however after that the weather looks quite settled into next week. But this is South West Scotland and anything can happen when it comes to the weather!

One Response to Smolts Galore!