As regular readers will be aware, we’ve been monitoring smolt movements on the River Ayr through Catrine dam in a custom built fish pass and by-wash for several weeks now.

Recently, the number of fish we’ve seen with fungal infection prompted us to call in the Fish Health Inspectorate from Aberdeen. This disease occurs naturally in rivers but during low flows and warm weather, it can spread quickly and severely impact smolt survival. Once they reach salt water, the fungus is killed off and the smolts should survive but that relies on them reaching the harbour before they succumb to their infection. We will have to wait a couple of weeks for the official report. 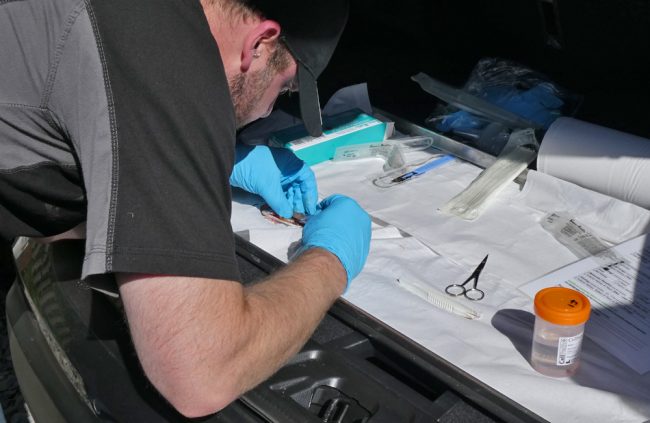 David from the Fish Health Inspectorate at Aberdeen taking samples from smolts for analysis.

With a large number of fish held up on their migration behind Catrine Dam and ever increasing numbers affected by fungus, we took the decision to remove the trap from the bywash and maximise the flow in the hope of encouraging smolts to move again. We have been running the trap at maximum flows for the last couple of weeks to try to achieve this but without much success. Removing the screens allows more flow through the by-wash. 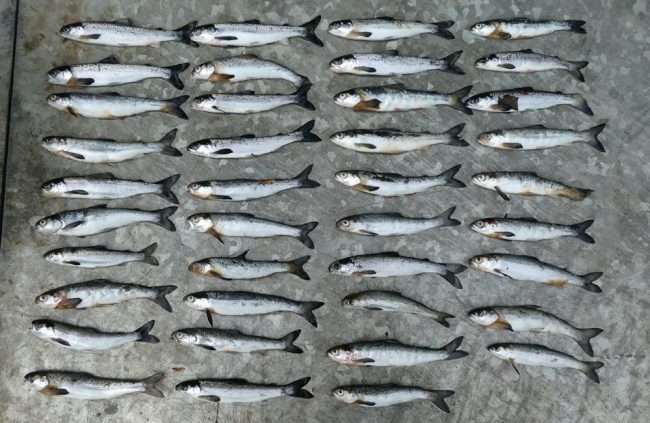 A sickening sight for anglers and biologists. Mortalities have almost doubled daily for the last few days prompting us to remove the trap in an attempt to gain more water to flush them seaward on their journey. All these fish were affected by fungus.

In order to assess any impact of a turbulent passage through the by-wash, we’ve set up a new fyke trap and holding box in the middle pool and this will be inspected in the morning to check the condition of the fish that have moved through the dam and nmore importantly to confirm whether or not they are moving again. 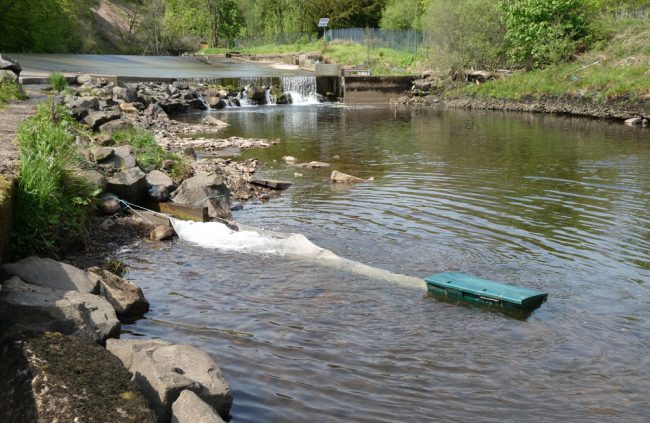 To assess movements through the by-wash now that the flow has been increased and screens removed, we will monitor the impact of this turbulent journey and then decide whether we can safely continue trapping in an attempt to estimate the output from the upper River Ayr.

Fingers crossed this will be a step in the right direction. We may continue trapping for a while yet to allow us to obtain a count on the smolt output from the upper river but only if we can do this without comprimising the already delayed smolts. Fish welfare is and always will be our first priority.