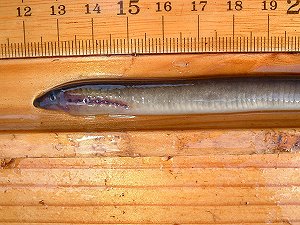 Sea lampreys have been found in the River Ayr during surveys by Ayrshire Rivers Trust. Ayrshire Rivers Trust biologist Dr Alistair Duguid said: “I was very excited to find evidence of this endangered fish breeding so close the middle of Ayr. Although our rivers are not as well known as east coast rivers such as the Tay or the Spey, they still support a huge variety of wildlife.” The sea lamprey is an unusual species of fish which migrates to sea as an adult, where it attaches itself to other fish using its sucker-shaped mouth. At breeding time, sea lampreys migrate into rivers where, like salmon, they eventually spawn and die. Anglers have reported adult lampreys in Ayrshire rivers in the past but this is the first confirmed record of sea lamprey juveniles. The Ayrshire Rivers Trust survey was part of a national study funded by Scottish Natural Heritage (SNH) and coordinated by Ecological Research Associates (ERA).

The Fisherman’s Supper was fully booked this year, with over 100 anglers attending on 22nd October. Hosted by the Cariston Hotel in Ayr, the evening included an excellent meal and amusing anecdotes from a variety of guest speakers. Trust biologist Dr Alistair Duguid and TV angling celebrity Paul Young also gave expert advice in an ‘angler’s question time’. Funds raised by the event will help the Trust maintain its fisheries research programme during 2005. 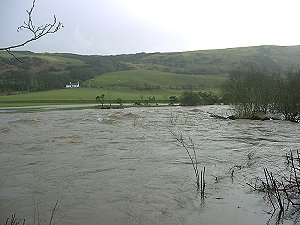 A flood warning for Ayrshire rivers was issued on October 6th following torrential rain. This summer has been one of the wettest on record, in contrast to the dry summer of 2003. There have been six flood warnings for Ayrshire and Arran since November 2001, when Floodline was launched by the Scottish Environment Protection Agency (SEPA).

Held at Blairquhan Castle on 18 June, this year’s auction dinner in aid of river conservation attracted 150 guests. Donations for the auction included paintings, holidays abroad, gastronomic delights and days out at top sporting venues. Mr James Hunter Blair, who kindly hosted the event said: “I am delighted such a good total was achieved and that everyone enjoyed themselves.” 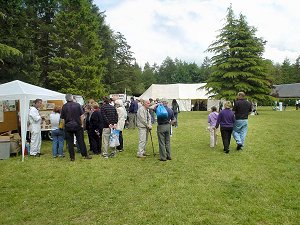 A record 2,700 people visited the Trust’s annual country fair on 30th May. Fine weather helped make the event a great success. Held at Barskimming Estate near Mauchline, visitors were able to enjoy walks along the spectacular Ayr gorge. Several craft and market stalls proved popular plus a range of activities including target golf, guess the weight of the trout, falconry displays and fly casting demonstrations by world record holder James Tomlinson.