The remaining genetic samples needed from Ayrshire for the Atlantic Salmon Arc Project (ASAP) have now been collected. Ayrshire Rivers Trust has collected a total of 697 samples for the project, which has been designed to test the genetic make-up of wild Atlantic salmon stocks across western Europe. The idea is to find genetic markers showing clear differences between sub-populations, which may have developed over the last few thousand years. Westcountry Rivers Trust is spearheading the project, with Exeter University carrying out the genetic analysis. Ayrshire Rivers Trust is collecting all the samples together for the project from the west coast of Scotland.

Guests at the Fisherman’s Supper on 21st October enjoyed a variety of speakers, including former international rugby referee Alan Hosie, who received a standing ovation for his amusing stories about life on and off the pitch. Ron Holloway gave a talk on his knowledge of chalk streams, from working on the River Itchen in Hampshire and Brian Shaw updated guests on the latest work of Ayrshire Rivers Trust.

Many thanks to everyone who generously supported the Trust on the night and to the Cariston Hotel staff, who once again provided guests with an excellent meal.

The electrofishing season is now complete, with a great deal of information collected from all the major river catchments in Ayrshire. The summer of 2005 remained fairly dry until late September, allowing electrofishing of a record number of sites. 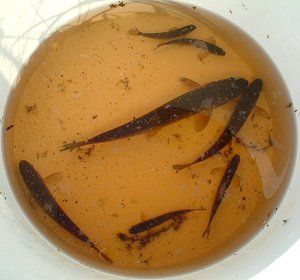 Timed electrofishing surveys on the main channels of the Rivers Stinchar, Doon, Girvan, Ayr, Irvine and Garnock revealed some interesting patterns. The highest ever capture rate of salmon fry in Ayrshire (31 per minute) was recorded on a site on the upper Stinchar. A record capture rate was also recorded for a consistently productive site on the Girvan. A clear pattern of decreasing salmon fry size on the main channel of the Girvan with increasing distance from the sea is thought to show the effect of lower temperatures on fish growth at altitude. However, the lower stretches of nearly all the rivers in Ayrshire show lower juvenile salmonid densities due to shallow gradient, slow flow and diffuse pollution in lowland areas. The River Irvine appears to be suffering from these effects for much of its length with juvenile salmon production best in the area between Crooked Holm and Darvel.

Other findings of interest included a population of gudgeon on the Irvine up as far as Kilmarnock, probably introduced by anglers using the fish as live-bait.

Grayling were also found on the River Lugar at two sites, in addition to angling records for the main River Ayr up to Muirkirk. None were found upstream of Ochiltree, so please report any grayling caught upstream of this point to the Trust.

Genetic sampling for the Atlantic Salmon Arc Project (ASAP) is almost complete with 338 more samples collected in 2005. 150 of these were collected from the Lower River Doon (below Loch Doon dam) which appears to have consistently high parr production in the main channel. The Trust also assisted Fisheries Research Services (FRS) in their annual disease monitoring programme. Many thanks to the volunteers who have helped with electrofishing surveys this year.

The River Garnock habitat survey has been completed by summer staff member Josef Durok. A great deal of information has been collected thanks to the enthusiasm of Josef and the addition of new equipment including a GPS. The report is now being completed and will be available by the end of this year. The survey has been funded by local angling clubs, North Ayrshire council and SNH and will provide a valuable source of information when developing a fisheries management plan for the river.

The Ayrshire Rivers Trust Country Fair was held again this year at Barskimming, by Mauchline. It was unfortunately a damp day which discouraged many, so there were not as many visitors as last year. However, those who came enjoyed the Falconry displays, expert lessons on fly casting and games including toss the welly, target golf and guess the weight of the trout!

For bargain hunters there was also a Bring and Buy stall selling a variety of wares, as well as the Ayrshire Farmer’s Market and local craft stalls.

Trust biologists Brian Shaw and Peter Minting were pleased with a catch of 20 sea trout on the Machrie Burn on Arran this week (June 6th 2005). The trout were netted with the permission of the local salmon fisheries board, as part of a study to establish the health of sea trout stocks in Arran and Ayrshire. In addition to standard measurements such as size-frequency data to assess the structure of the population, the study also includes monitoring the number of sea lice present on each fish. Other studies have shown that an accumulation of more than 30 sea lice can kill young sea trout or salmon when they first migrate to sea.

The data from the Machrie Burn suggest the fish were very healthy, although a low number of the two most commonly found species of sea lice were present. Some studies have suggested a link between salmon farms and the decline in the sea trout population on the west coast of Scotland. The only salmon farm in the region is in Lamlash Bay, Arran, although there are other salmon farms further north in the Argyll region. The Trust will be continuing to sample other sites in Ayrshire and Arran this year with the help of funds from the Tripartite Working Group (TWG).

April 2005 – Salmon in the Classroom UPDATE

Straiton Primary school and Dalmellington Primary school have released the baby salmon which they reared from eggs in a classroom project. (see below) The fish were finally released into the River Girvan on the 25th April and 17th March respectively, with the help of Trust biologist Peter Minting. 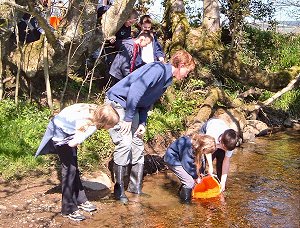 Salmon in the Classroom 2005 is underway with four Ayrshire primary schools involved. Assistant biologist Peter Minting has been running the project this year, with the help of funds from BAe Systems and Nestlé. So far salmon eggs have hatched at three of the four schools, Dalmellington, Straiton and Kingcase Primary (Prestwick). Eggs are still to hatch at Greenmills Primary, Cumnock.

The project involves an afternoon lesson on local rivers, including threats to wildlife such as pollution, habitat loss and over fishing. The salmon life cycle is then covered in detail including breeding behaviour and migration. After advice on how to look after salmon eggs, the class is supplied with a mini-hatchery containing a small number of eggs. This year hatcheries have been fitted with automatic coolers with the help of Fizz Soft Drinks, an Edinburgh based company which has also helped the National Trust run marine aquaria at St Abb’s Head reserve.

So far the new system is working well. Dalmellington’s eggs hatched first and the fish should be released on 17th March. Eggs from wild salmon have been supplied by local hatcheries which are attempting to boost stocks of wild salmon and trout, by artificially rearing large numbers of fry from eggs taken from a small number of adult fish. The adult fish are then released. 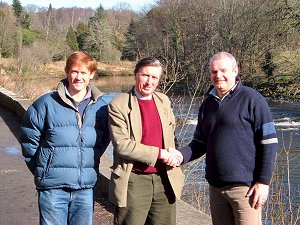 Brian Shaw has joined Ayrshire Rivers Trust as senior fishery biologist, replacing Dr Alistair Duguid. A former Trustee of the Western Isles Fisheries Trust, Brian has a range of fishery management experience including successful habitat restoration projects and a broad knowledge of salmonid aquaculture. Dr Alistair Duguid is now travelling in SE Asia, with plans to visit a fisheries project on the Mekong Delta and several other environmental projects.

Trustee Mr James Hunter Blair passed away at home, Blairquhan Castle, on Christmas Day 2004. An enthusiastic and generous supporter of the Trust, his presence will be sorely missed. In addition to running his estate at Blairquhan, Mr Hunter Blair was a well-known and respected member of his local community.