After a long winter attending meetings, replying to consultations, submitting funding applications, writing reports etc., it is good to be out and about doing some biological work again.

Stuart collected the smolt trap from Galloway Fisheries Trust at the end of last week. Once we found the instructions assembly was quite straightforward and the trap was soon floating on the river. It was deployed properly on Monday morning and the first days catch consisted of leaves, twigs and other debris, but no fish.

The forecast said heavy rain on Tuesday night so the trap was released from the main flow into a backwater. Of course the rain never materialised so it was back out again last night.

This morning we caught the first fish, a salmon kelt (would have been 5-6lb in its heyday) and a brown trout of 34cm. We also caught a frog! 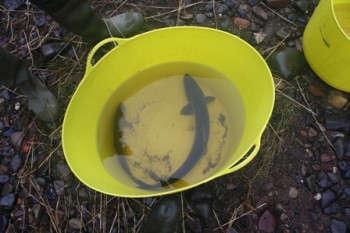 First catch, a kelt and a brown trout

No smolts so far but it is still early days, we don’t expect the main run until early May. With the heavy rain forecast tonight the trap is back into the side again!

I intend to keep the blog updated regarding the smolt trap so keep checking in for the latest news.