A 6′ spate on the Ayr on Friday night highlighted the challenges involved in running a smolt trap on  a big river such as the Ayr. The trap had been released into a back water in anticipation of the spate where it was left high and dry when the water receded. 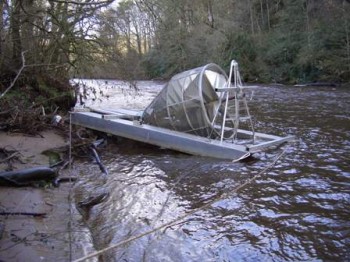 By Sunday the river had receded enough to allow the trap to be deployed again. The forecast was for frost overnight so it was alarming to find that the river had risen 12″ (god bless the met office!). However the trap was operating perfectly and had caught a few fish.

The catch consisted of  a few salmon pre~smolts, several sea trout smolts, 6 salmon parr (65-77mm) and an eel.  Scale and genetic samples were taken from the smolts captured. The largest salmon smolt was 156mm; I haven’t had a chance to look at the scales yet but it may be a three year old. 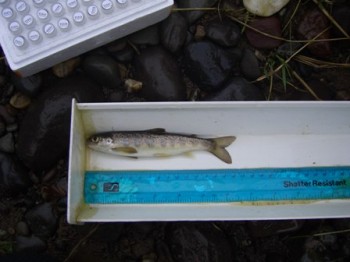 More rain is forecast this week so the trap is back into the backwater out of harms way.