The plan this morning was to start where we finished last night and fish the last pool at the top of the stretch to complete the first once over. This didn’t happen as we decided to re fish the entire stretch again from the bottom up and concentrate on the deeper water where we caught the most fish yesterday. When we reached the top pool we were going to fish it twice with a half hour rest in between.

Stephen Frazer from MBV joined us today as a very interested observer/assistant (Stephen is a mad keen angler who is used to fishing some of the best waters anywhere in the World so I wondered what what he would make of his experience on Kilmarnock Water). We started fishing and straight away a good trout popped to the surface and there was a melee as enthusiastic netters jumped to action. I think Stephen had just caught his first trout of the day. Gordon and Gillian had serious competition today!

We made fast progress through the pools and although we didn’t catch anything like as many fish as yesterday, we were catching larger trout on the whole. Around mid day, we were in position to fish the top pool that had escaped yesterdays activities. Stephen was buzzing with anticipation and we had to keep him in check to make sure we followed our system. The pool turned out to be far too deep to wade and although we managed to draw a few good trout from the depths, we just couldn’t fish this pool effectively…. Stephens disappointment was palpable. We fished the run at the weir that marked the upper limit of the rescue and headed back to the deep pool for another look. I asked Gillian to switch the equipment to pulsed rather than smooth DC and I reached into the depths to my limit. Hey presto, we drew a good 8 – 10 more fish from this pool with many around 10 – 11 inches in length. There was one larger fish that I saw but I couldn’t hold it with the current and it slipped back out of sight.

All in all we rescued another 350+ fish today, mostly trout and salmon (250 trout, 100 salmon), and all species caught yesterday, were caught again today. We took scale samples from a few fish today and will have a look at these when we get back to the office. 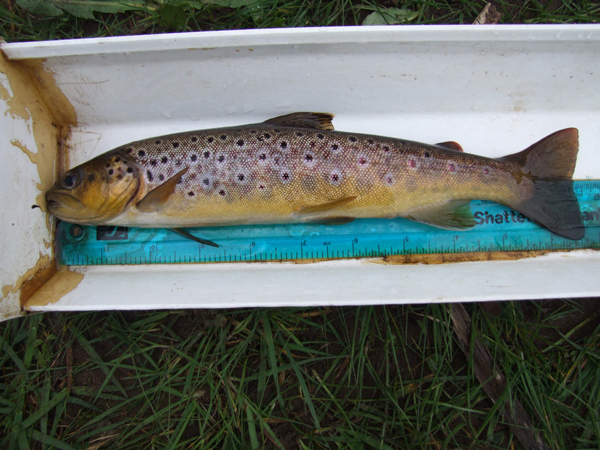 A nice Brown Trout of over 10". This one was a bit lean but still a nice fish. 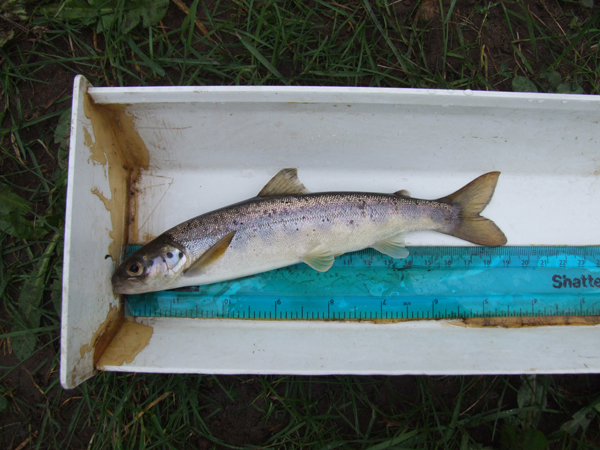 The estimated total number of trout and salmon rescued and later released over the two days is around 1100 fish. Including other species, over 1500 fish were caught and moved to new locations. 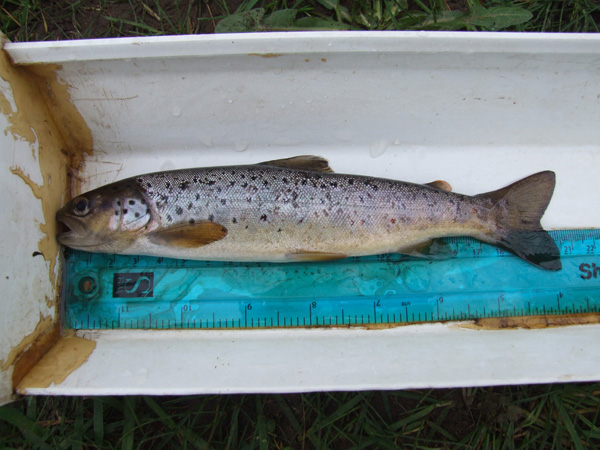 Max and Gordon helped throughout both days and again I’d like to express our thanks to them both. Stephen I’m sure enjoyed his day with team and I’m certain he learned some new tips on where to find trout hiding for his next visit to the Clyde. 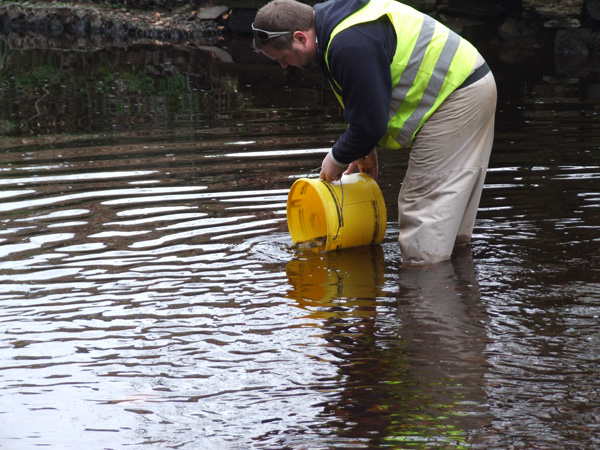 Moira Heron from URsTV urstv.com/ covered the rescue as did AyrshireTV ayrshire.urtv.co.uk/ so hopefully you will find their video clips available soon on the net. The Kilmarnock Standard sent a photographer along so watch their editorial too.

MBV will next week construct the ramp into the river and commence on building the road on the right bank. When the time comes, MBV will consult with ART about the restoration and return the river to it’s full width. The long term benefit of having the storm water overflows upgraded will be noticeable not just on the Kilmarnock Water but downstream on the Irvine too.