After more than 100 years holding back the upper river Irvine (and fish), the weir between Newmilns and Darvel has finally started to break up. At some point in the last few days, the weir gave way below the water line and the levels in the pool upsteam fell. ART received a call yesterday from a Darvel AC member concerned about what the best course of action would be to stabilise the situation. Having now viewed the damage, there is little doubt that the remainder of the weir should be removed as a matter of urgency for public safety. In its current state, the weir is an extremely dangerous structure that could easily catch out the unwary. Children, animals, canoeists and anglers should avoid the river for a hundred metres upstream as there is a significant risk of drowning for anyone or anything that gets caught in the current. (A similar breach at Doonholm Dam on the Doon last year nearly cost a canoeist his life!) 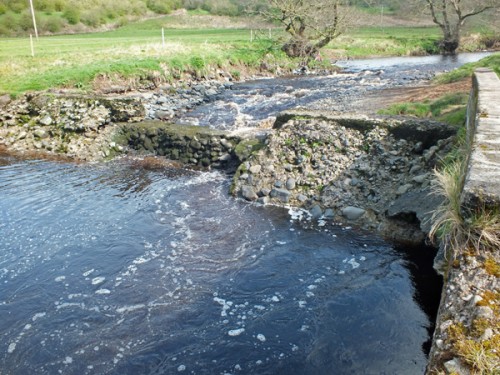 After a phone call or two, it appears that ownership may fall to Lanfine Estate who have been contacted but have yet to confirm this.  Hopefully the centre section of the weir that remains and poses such a health risk will be removed as a matter of urgency. Once made safe, there will be an opportunity for stabilising the bankside erosion that has been an ongoing problem as a result of this weir. I’ll keep readers posted as and when there is progress to report. 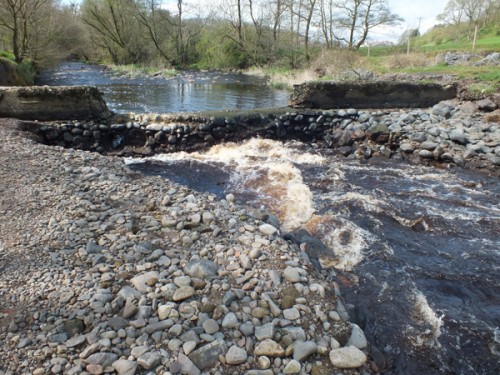 The upstream view that hopefully shows the strength of flow passing below the dam. This could be a death trap for people and animals! The left bank is eroding rapidly as a result of this breach. 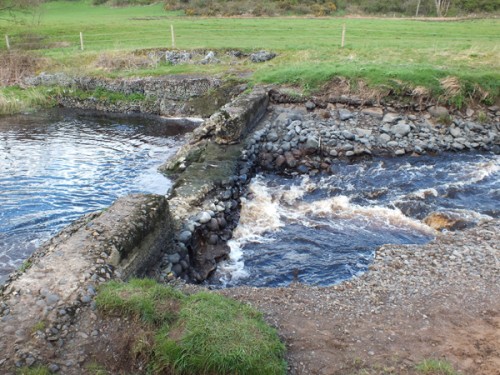 The near bank is eroding rapidly as a result of this breach.