Just a quick update to our earlier blogs about the fish rescue at Kimarnock Water in the town centre. MBV, the contractors are forging ahead with the road up the river. When I was there yesterday, they were salvaging large rocks to reuse during the reinstatement works but were concerned about the rising water level however I don’t think it rose much after I left. With so much going on on the Kilmarnock Water at the moment, it would be nice to think we would soon get some dry weather to allow the contractors to make rapid progress. This contract is scheduled for completion in October so any hold ups could affect the coming spawning season. 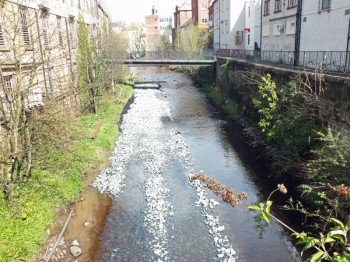 Progressing through the town centre

All the vegetation to the left of the photo above is to go to make way for the new pipe. The photo below shows them removing the vegetation further downstream. The restoration will need careful planning to ensure the river doesn’t become over wide and shallow but the contractors are aware of our concerns and will consult with us full in due course. 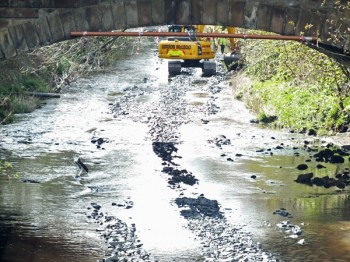 I met with MBV’s site agent and environmental manager today to discuss how they were going to construct their road through the only deep pool in the section. They also need to clear an area on the left bank for their materials that will be lowered from a builders yard in Sandbed Street. Although most of the Japanese Knotweed appears to have died after last years control, plants along the water’s edge survive. This means that MBV will have to dig and dump a fair bit of soil from the left bank  before they can bring their materials and equipment into the site. There is no way around this and MBV have been proactive in ensuring they comply with all requirements and advice that ART has supplied on this matter. The Jap Knotweed that survived the spraying last season is mainly found along the water’s edge. These plants had been flattened by the spates during September, breaking the stems and therefore the chemical wasn’t translocated to the root. Other areas further back from the river appear to have been highly successfully treated with only a few new canes appearing.

Following the works, the deep pool will be restored as this provides a refuge for migratory species until they ascend the weir a short distance upstream. 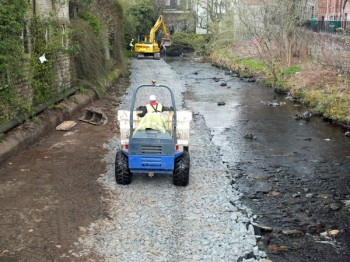 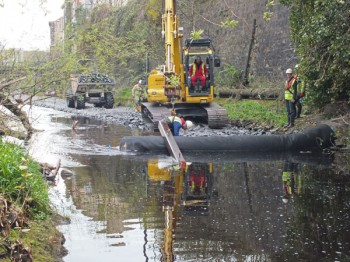 Preparing to roll the membrane into the deeper water 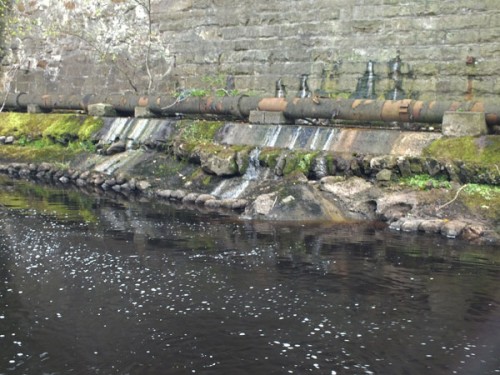 Raw sewage leaking from choked drains. Solving this isn't part of the job but the responsible property owners have been notified that they must deal with this problem.