Following our request, SEPA has agreed to waive the requirement for a CAR licence to allow the remainder of the centre of the weir to be removed thus preventing the delays that licencing could bring. Our thanks go to David Wilbraham at SEPA’s Ayr office who instantly recognised the dangers. David was instrumental in quickly resolving a similar situation at Doonholm Dam last year after a canoeist nearly drowned when he becoming stuck below the remaining section of that weir. Lanfine Estate are awaiting a quote from a contractor to undertake the emergency work so, fingers crossed we will soon be able to report that work is underway.

Once the structure is made safe, ART intend to apply for funding to allow complete removal of the weir and bank stabilisation to take place.  This is being raised tomorrow at the SEPA barrier steering group meeting so hopefully we will meet with their approval and get the thumbs up to put a package together that receives their financial support. With any luck, we may be able to have the works complete during the summer’s low water (if we get one!).

Looking at the developing situation at the weir, it would appear that both Darvel and Newmilns Angling Clubs could benefit from coming to an new arrangement over the fishing at the weir pool and new run. I understand that no fishing was allowed in the weir pool as fish used to get held up by the dam. With the weir gone, and a nice new run developing into the pool, perhaps a beneficial arrangement could be agreed giving both clubs access to the run and weir pool on alternate days??? Of course the clubs will need to decide for themselves what the best solution is, but I can’t see why everyone shouldn’t benefit from the new situation (as long as the rules are clearly defined). Without a doubt, the salmon and trout will benefit from improved migration to their spawning grounds and improved sediment transport which is important for maintaing spawning redds. 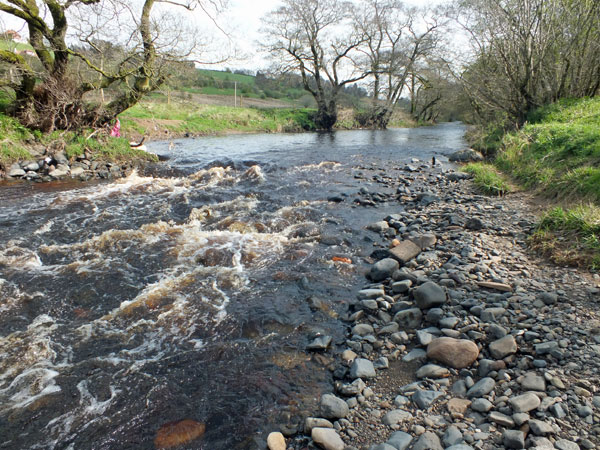 The new run into the weir pool that has developed. Further cutting back may occur before the situation stabilises. 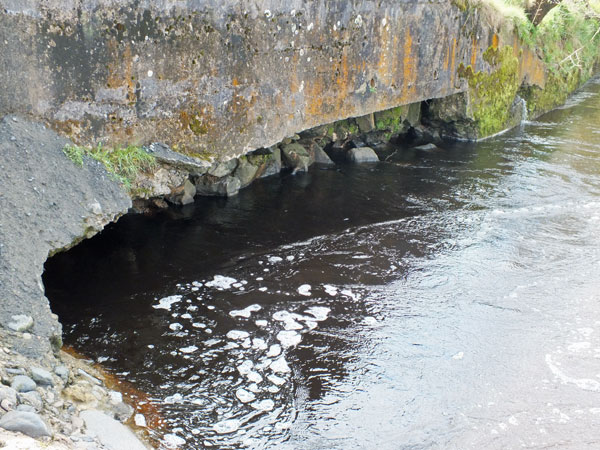 The left bank downstream of the weir has been undermined despite previous attempts to stabilise this erosion. Following the complete removal of the weir, this should be a thing of the past.