Giant Hogweed appears on the Doon

Worryingly, Giant Hogweed has turned up on the River Doon. We were aware that it grows at the tidal pool at Doonfoot but Stuart from Doonfoot Fishings informed me today that it was now growing further upstream at Cambusdoon. Gordon MacDermid our CIRB project officer went to investigate this afternoon and sure enough he came across a couple of small stands of young GHW plants growing on the right bank. 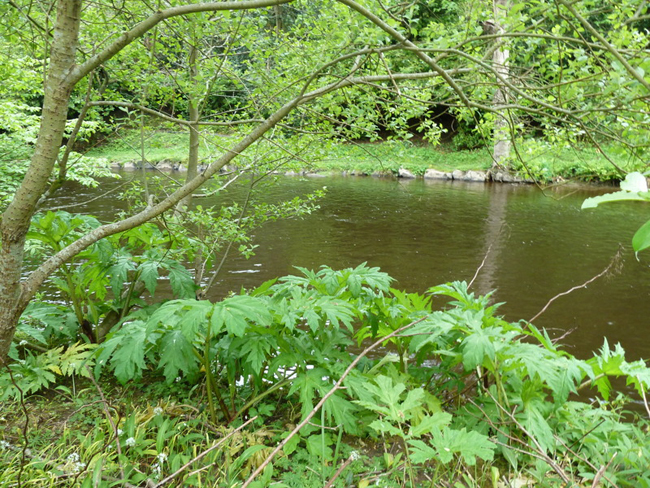 Giant Hogweed on the Doon

Judging by the number of plants that can be seen in the above photo, at least one plant flowered here last year which is very worrying as it wasn’t noticed and dealt with before it seeded. The source of the original seed I’m sure is likely to have been the tidal pool from where it may have been carried upstream in the gut of waterfowl. Giant Hogweed normally flowers between its second and fourth year so presumably the parent plant responsible for these seedlings germinated at this location sometime after Spring 2008.

Gordon passed his spraying course today so will immediately apply for a SEARS licence and spray these plants as soon as it is in ART’s possession (unless Stuart is able to do this). Anglers and owners must familiarise themselves with all invasive non native species (INNS) and remain vigilant if these noxious plants are to be kept at bay. ART are keen to hear of any INNS so that they may organise control.

This area will now require monitoring annually for at least 10 years as the seed can remain viable but dormant for years to come.