After about 10 months and many setbacks along the way, we can now report that the work has finished and the entire structure is operational. The contractor has yet to remove their scaffold and reinstate the grass at the park but the structural works are complete and I’m eagerly awaiting both rain and salmon to see how it all works. I’m sure it will be fine. Current river levels are 6mm lower than the previously lowest on record and almost 20 cm below the average so I expect the level will overtop the weirs most of the time.

One or two sceptics warned us along the way that the poachers will have a field day netting salmon in the newly formed pools but I doubt this as they should run straight through. Anyway, a belt and braces approach was employed and the last job I asked the contractor to do was place a few very large boulders in the pools to stop anyone dragging a net easily. The deeper pool has boulders of nearly 1 tonne in weight distributed across it. The other pool has smaller rocks but still weighty enough to cause problems to netters. I’m sure once a few branches become lodged within the pools, netting won’t be a serious threat.

The fish passes and pools are now complete and operational 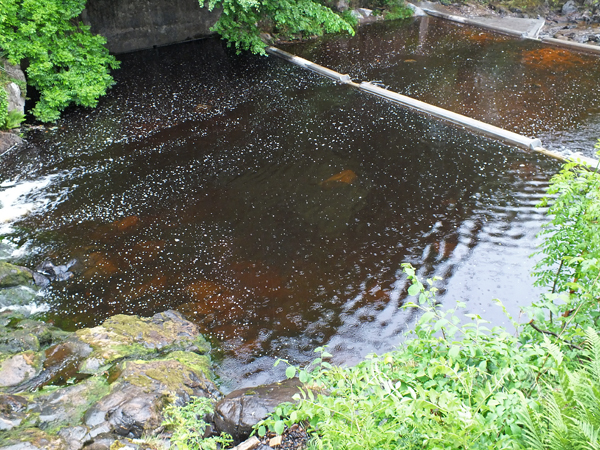