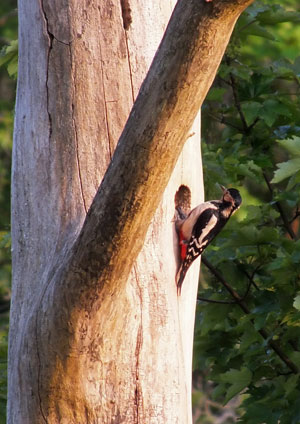 The River Ayr has a variety of riparian woodlands along its length and it’s nice to see areas where standing deadwood is left untouched until it eventually falls naturally. Last week I heard the unmistakeable squawking of young birds in a nest waiting for their next meal. It didn’t take me long to pinpoint the source of the noise and I settled down with my camera to try and photograph the adult birds returning to the nest. The Greater Spotted Woodpecker isn’t rare but they are striking birds and I always enjoy seeing them. This dead Elm tree has two holes that have been opened by these birds at some time. On the far bank a couple of hundred yard upstream I saw another pair busy feeding young too. I watched as a large mayfly struggled skywards only to be expertly captured by one of these surprisingly nimble woodpeckers that appeared to stall and fly backwards as it spotted and altered course to take it’s prey. I could have watched them for hours if it hadn’t been for the midges!

In all too many areas we see riverbanks cleared of trees and overgrazed to maximise agricultural production. Not only does this reduce the quality of instream habitat but it also reduces the diversity of other wildlife that survives. We frequently hear that pesticides and herbicides historically were responsible for much of the decline in otters and farmland birds, but the loss of habitat is equally responsible for declines in many other species too. Personally, angling has never just been about catching fish but rather it’s the appreciation of everything that surrounds me when I’m on the river or loch. I’m sure many anglers feel the same way. 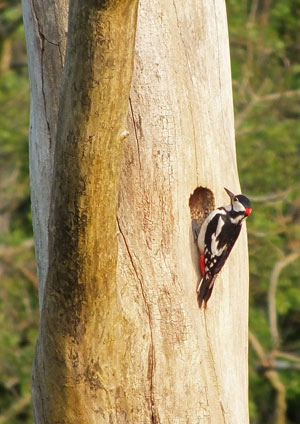 Perhaps we should be looking to restore more riverbanks with native woodland as part of our future project work. In particular, I can think of long stretches of the River Garnock, the Doon and upper Ayr that would benefit from riparian tree planting. As Global Warming raises temperatures across the globe, our rivers too will suffer and elsewhere in Scotland, great efforts are already underway to defend upper catchments by planting trees.