Gordon and Alba (our Spanish Student) has been at Failford injecting a stand of Japanese Knotweed for research purposes for most of the day returning to the office around 4.00pm. There had been no rain which we were relieved about as we had contractors on the river spraying today too. The river Ayr was in great order and I think Gordon had planned to have a cast this evening.

On my way home around 6.00pm, I thought I’d have a look at what they had been up to and stopped at Failford only to find the river in spate and as dirty as I’d ever witnessed. I called Gordon and we met at Barskimming Bridge and decided to investigate the source of the colour as I was convinced that this wasn’t entirely natural. We ended up pinpointing the source to a small burn that rises below Tincornhill Quarry East of Sorn. There had been a cloudburst and the hillside had received and incredible amount of rain in a very short timeframe.  Another burn from the same hillside closer to Sorn had also been a problem due to a blocked culvert under the road at the East end of the village but the silt load didn’t appear to be nearly as serious.  This burn burst its banks and flowed down the main street flooding the road and I understand a few properties which of course must be very distressing to those affected. Another burn to the West of the village also ended up flowing down the road past the castle gates to the river.

It is not unusual to have a high sediment load on the Ayr following heavy rain, even if very localised but, this was extreme. I have since discovered that about 75mm (3″) of rain fell in half an hour.

There is no way to tell just how many anglers were disappointed by the conditions this evening but I expect it wasn’t just a handful. Upstream of Sorn the river was low and in great order as was the Lugar. We as came across 3 dead cows in the river if anyone knows of a farm that is missing them, please let us know and we notify the owner. 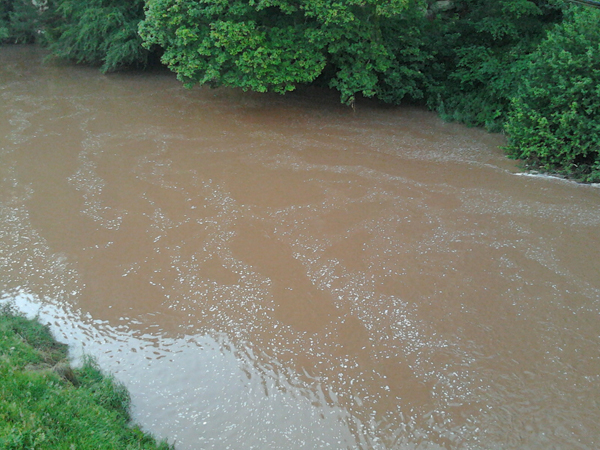 The Ayr at Barskimming Bridge around 7.30pm. By this time the level had dropped back considerably. 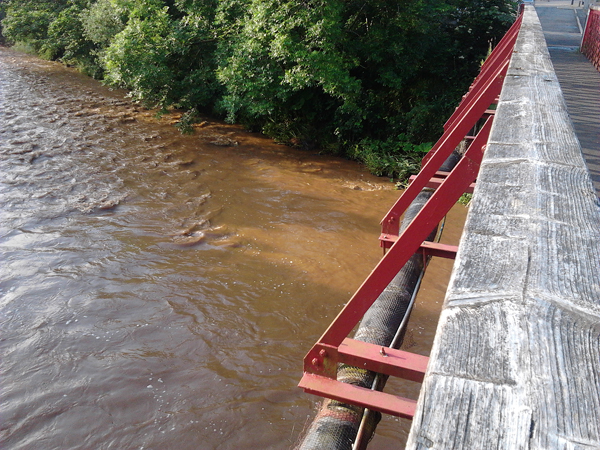 Taken at Catrine aboout 7.15pm in a falling water.