Gold Ingots in the Lugar?

We were electrofishing yesterday on the Lugar and although numbers weren’t great we did find a slight improvement on the last couple of years at some sites. This may be accounted for at least in part, by our new electrofishing equipment being more efficient but it is too early to tell. We won’t know until we have compared a full seasons results. Suffice to say that numbers are still far from excellent and we remain concerned about the number of juveniles in the river.

Well, salmon are most often referred to as ‘bars of silver’ but we found ‘Gold ingots’ yesterday and they were stunning. The parr on the Lugar are frequently golden, presumably influenced by the peaty coloured water. One thing for sure is that they were in great condition. The photo below illustrates both the colour of the fish and the water. 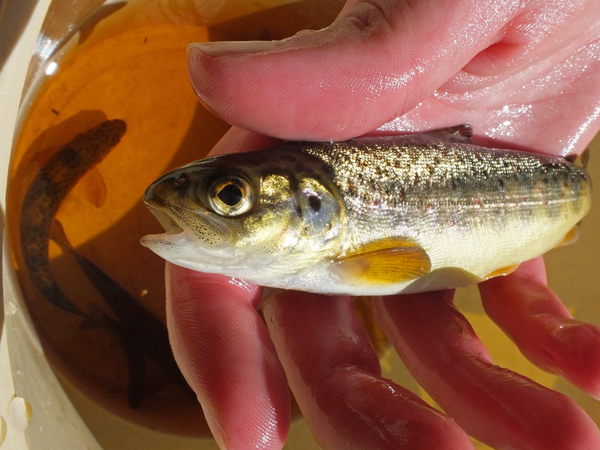 We came across a few trout and the photo below was the largest fish we netted. I’ve still to compare these results with last year but I fear trout were down as we didn’t catch many at all. 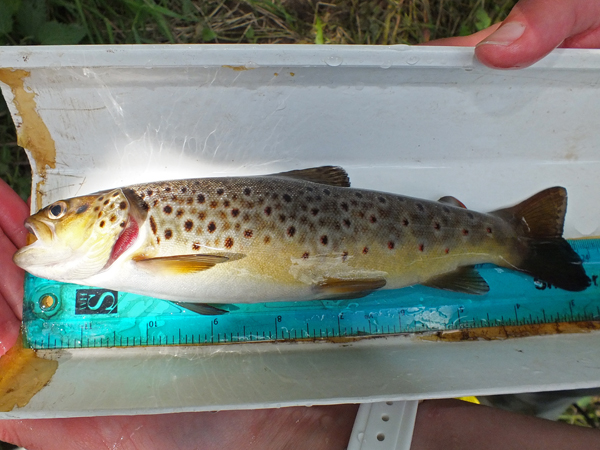 Fat as can be

This was the largest trout we found and in another month or two and it should make a good half pound. We don’t target this size of fish but if we did, I don’t think we would struggle to find them. This is the size of trout that anglers can expect from local rivers. I see plenty of them on the Ayr system and the Irvine too but I keep hearing that  1 1/2 lb +  trout are being stocked.  I’m not a fan of this type of stocking but that’s a debate for another day.