The Water of Fail survey produced it’s normal very poor results. Only the lower site produced salmonids this year with stoneloach and sticklebacks at all three sites. Despite regularly hearing opinions that the Fail is improving, there is virtually no evidence of this in the electrofishing results. Three years ago in 2009 Gillian and I found salmon at the middle site and we were hopeful that this would be replicated in following years but sadly not yet.

Comparing the Fail to the burns in the Girvan catchment is like comparing night and day. The Barlewan Burn wasn’t that great just a few years ago with similar issues to the Fail (Sewage Treatment Works discharge and diffuse pollution from agriculture) but following recent improvements aimed at benefitting the environment, the Barlewan is now highly productive and an important juvenile nursery. The Fail should be similarly important to the Ayr system for salmon or sea trout or both but we only found a handful of trout, a couple of salmon fry and one salmon parr. Stone loach were abundant. Of the trout we caught, we did catch one nice one that was obviously doing well. 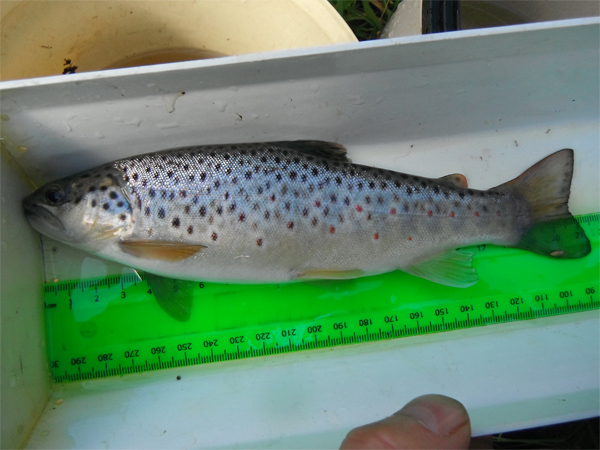 As Alba and Helen processed the fish, I nipped 50m upstream to see what lived in a deep pool below a small weir. I caught another couple of larger trout. 2 0f the 3 larger trout were like peas in a pod raising my suspicions that these were stocked fish. Scales showed them to be 2 plus years old with very uniform growth in their first two years. Although I’m not certain, I would say these trout are stockies but from where? I didn’t think Tarbolton A.C were stocking it any more. I’d really like to know if anyone has any information they can offer.

We are always surprised to find grayling at the lower site and this year was no exception with one grayling captured. Grayling are supposed to prefer clean waters and the Fail could hardly be described as that, but there always seems to be the occasional one turn up. 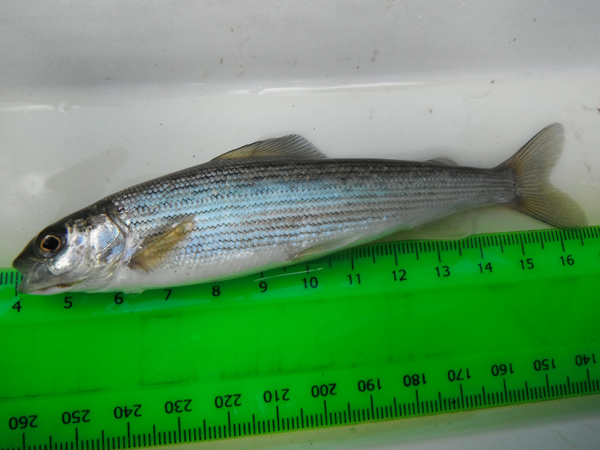 The token grayling that was caught