This has been another busy week at the Trust not least because Gillian is away to Egypt on holiday (she was needing some sun). As I haven’t managed any updates during the week, I’ve added this large post to cover the most interesting events off the week. I may do this again if time is limited.

Monday was wet and we were all in the office catching up with data entry, claims etc. The Fisherman’s Supper will be in November and we’ve started organising this event. We will need to find raffle prizes etc and donations are always welcome. Following Janette Galbraith’s departure from the Trust earlier this year, Gordon will be taking over the admin and events role once he finishes his INTERREG position at the end of this month and his first task will be to ensure the smooth running of the fisherman’s supper.

On Tuesday we collected 75 water voles from Saffordshire for the last stocking of Darley Burn that brings our water vole project to its conclusion. We intend to deliver another small trial next year  aimed at introducing water voles to a high quality SUDS pond (Sustainable Urban Drainage Scheme) in Kilmarnock if adequate funding can be secured. Helen is on the case.

Meryl was spraying balsam between showers in the Stinchar catchment. The rest of the staff and volunteers were surveying Invasive Weeds on the Lugar as water levels were still too high for electrofishing whilst I remained in the office to catch up with things and meet with MBV staff regarding delays to the works in Kilmarnock Water. It looks as though things will run on well into next year so we discussed the implications on the fish population. I’ll update everyone on this at a later date.

The water voles were released on Wednesday and we were accompanied by Chris and John from JRC Ecology as they were very interested in our project. They are working with SNH and Glasgow City Council on a water vole relocation project in Glasgow. One vole was missing from the cages however it turned up the next morning when it appeared from below the floor in the back of the van and was quickly released into Darley Burn. We had too many water voles for the Burn so released a few to the Collennan Burn close-by, where we have been monitoring for well over a year without any signs of mink. They should do very well here too as the habitat is ideal in the lower reaches. 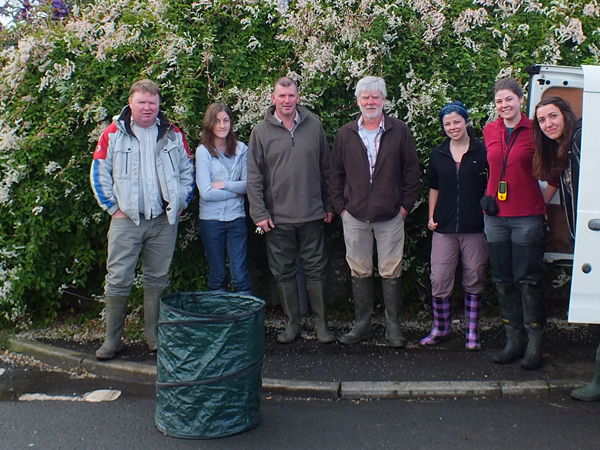 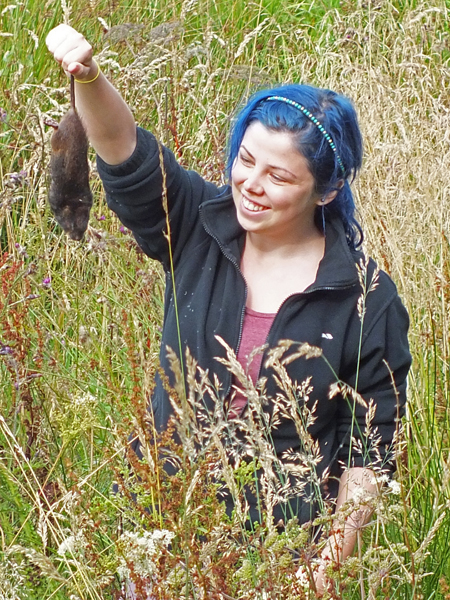 Emma, a volunteer clearly enjoying her experience with the Trust (I'm not so sure about the vole though). There is no better way to learn about conservation than getting hands on experience. 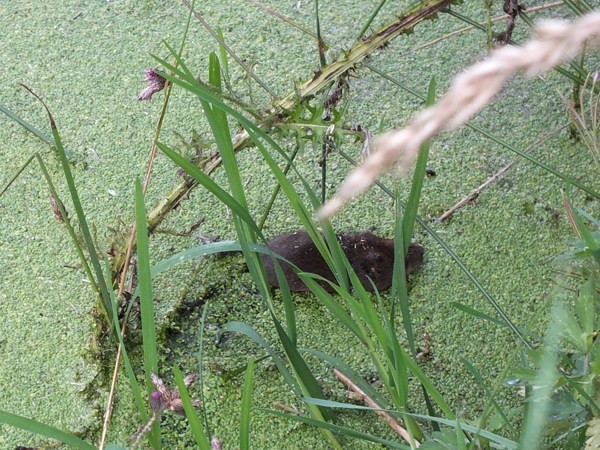 First ever swim. These animals are captive bred and don't get an opportunity to swim until they are released.

I also attended a meeting with the ATH Technical Working Group on Wednesday. Restoration of the Garleffan and Greivehill sites near Cumnock was on the agenda. Within the next week or so we will be commencing our annual electrofishing monitoring of these sites.

On Thursday I was in Glasgow delivering Invasive Weeds awareness training to Scottish Water’s environmental advisory team through the INTERREG project. This was well received and should help to reduce the accidental spread of non native weeds across Scotland. The environmental team requested similar training event for aquatic ecology as they are very concerned that their actions don’t impact on our fish or Freshwater Pearl Mussel populations. We will arrange this in due course as we fully support this type of partnership approach to improving performance. We have observed positive changes within those councils that we delivered similar training to, last year. Helen went on holiday on Thursday so the remaining staff and volunteers were completing weed surveys on the Coyle whilst Gordon investigated a new report of Giant Hogweed on the Glaisnock Burn. Unfortunately we lost another dry day that should have been spent electrofishing but without either of Gillian or myself available, this wasn’t possible.

I stopped off at the Burnanne Fish Pass to see what progress had been made. The concrete works are almost complete and given some dry weather I expect that by the end of next week, the new structure will be completed. I will wait to see how the water flows before I express any comments. Throughout the process, ART has consistently urged East Ayrshire Engineers to take advice from specialists rather than rely on us for guidance. Ultimately, fish used the old structure and the new one should be at least as efficient as before. The rock armour to deter fish going over the right hand side of the bridge apron doesn’t appear to be all that substantial and I fear it may wash out with a big spate. 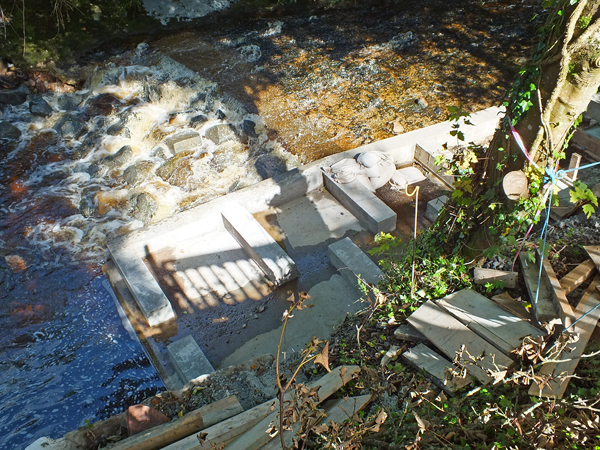 The entrance to the new extended fish pass 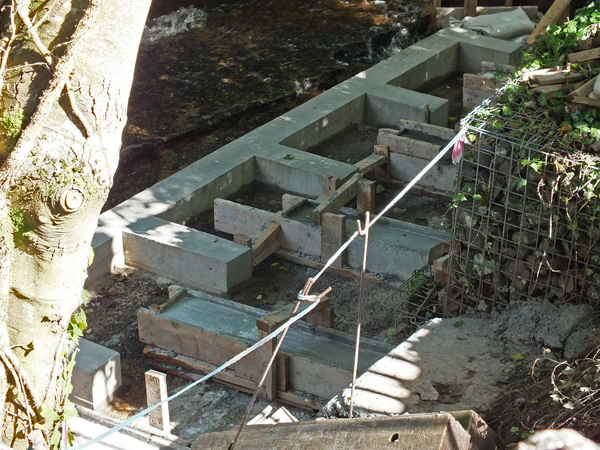 A closer view of the pass. Shuttering has yet to be removed.

First thing on Friday morning, Alba our Spanish Intern suddenly realised that she was meant to be  at Prestwick Airport for a flight home for the weekend. Despite  our best efforts to get her there on time, the check in had closed and they wouldn’t allow her to board. We then went electrofishing on the Ayr Tributaries and it started raining again much to Alba’s disgust. It’s just as well that none of us understand Spanish as I’m sure there was a lot of  bad language flying about that day. I took her to the airport after work and she managed to sort out a seat on a flight for this morning so hopefully she got away ok.

The lower Glenstang Burn results were once again disappointing, especially for salmon. We found a single grayling and quite a few 2+ trout but no fry or salmon at the site near Stair Church. Access to the burn is OK so I decided to have a look upstream to see if we could find any salmonids.  We fished a new site about  a kilometre upstream. No salmon or trout despite the habitat being suitable (more so for trout). What was notable was the amount of grayling we found. Considering the diffuse pollution and siltation that is evident on the Glenstang, I was surprised to find about half a dozen juvenile grayling at the new site. This raises the question, “why no salmon or trout?” This is worth further investigation but without a doubt, the burn would benefit from fencing as cattle have free access to the water and significant erosion is taking place as a result.

I looked back in the database today to find that Alistair Duguid had another site just upstream of Stair Inn that was fished in both 2002 and 2005. Only one salmon fry was recorded but no trout in either of the two surveys. Considering the results from all sites, I feel that both trout and salmon should certainly use the burn to a much greater extent than they currently do. Trout should be present throughout, yet are only found in the very lower reaches. Presumably they were lost from all areas as a result of historic pollution incidents and so far have only repopulated the lower reaches. I suspect that water quality has improved in recent years as grayling wouldn’t be present at their current level if water quality was the limiting factor. Invertebrates were numerous and diverse, but I’ll score these later once I have time. There was no shortage of food or cover for salmonids. Habitat was impacted by grazing cattle but not so silted as to prevent grayling recruitment. Grayling were making it up the burn so there should be no reason why trout can’t. The absence of salmon could be as a result of historical pollution which led to poor survival over successive years leading to a virtual loss of returning spawners. I expect that trout will eventually make their way back up the burn if water quality remains adequate. This is only a theory but it makes sense to me at least. I may try to find another site another kilometre or two upstream to see how things look there. 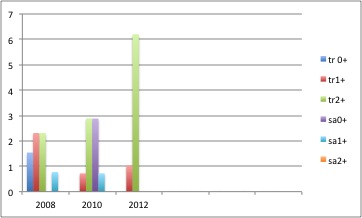 We also visited the Burn O’ Need (AKA The Puddock Burn) near Catrine. There has been huge movement of gravel and substrates since we last visited and the electrofishing site has scoured slightly leaving a bare clay bed and a pool where previously run and riffle dominated. There are still plenty of boulders offering cover but the site has changed character somewhat. A huge pile of stone is deposited downstream of the Sorn Road bridge. Trout fry were present but again no parr or aduts. Trout were last stocked upstream of the site in 2009. There were no 2+ or older trout in the site.   This site has been highly variable over the years and 2012 is no exception but what is causing the variability? The graph below shows the results since we started monitoring here. The number of fry and parr illustrated are per 100/sq m. Perhaps we should look at monitoring another site just downstream where gravel predominates and I see redds are completed annually. We will have a look at our site at Wealth of Waters upstream next week and see how it compares. I think I may also have a look upstream at Weitshaw to see what manages to spawn up there. 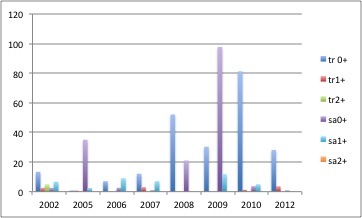 Variable results over the years 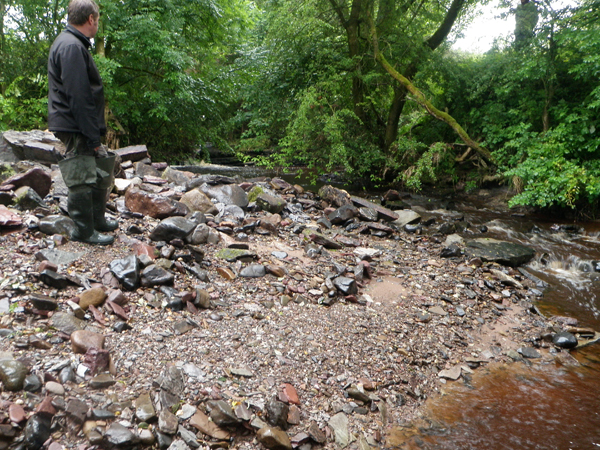 Gordon dropped in as he passed by and was shocked to see how much substrate had moved on this burn in the floods earlier this year.This pile of rock and gravel was newly deposited downstream of the road.

Before Brian left we discussed our electrofishing program and agreed that it was probably due a review. What I’ve started to do this season is to investigate tributaries more fully in order to identify issues and find solutions to problems that may exist. We may get through less tributaries in a year but with more depth. It will also allow us to prioritise those most in need of improvement and to seek funding for this purpose. We will then monitor them on a rolling program to see how things change. If time allows, we will also look at the coastal burns as they may be important for sea trout production.