We were back electrofishing at the Culroy Burn in the Doon catchment today. Concerns have been raised about the level of siltation arising from this burn but more importantly following last years generally poor electrofishing results, I wanted to see how the spawning and survival had been in 2011/12 further upstream that Minnishant that we surveyed last week (see older posts).

We fished a new site downstream of Culroy Bridge. We have data from 2007 and 2009 from two old sites very close by that I’ve used to compare with todays results but I didn’t feel the habitat was as good for juveniles and therefore I selected what I believe to be a site that can be repeated year on year to give consistency. Irrespective of the exact location, we can compare any site as it is the density of fry and parr that we calculate.

Results from the new site were  generally poor. Salmon fry and parr (0+ and 1+ years old) results were poor. Similarly trout fry were poor but parr were moderate.This is worrying when you consider that the Culroy was once reputed to be an important salmon and sea trout spawning burn. Siltation was evident and cattle had access to the burn where we fished although I don’t think it was so damaging that it should account for low juvenile numbers. The invertebrate sample confirmed that water quality appears to be good with plenty of heptagenid and isoperla present. 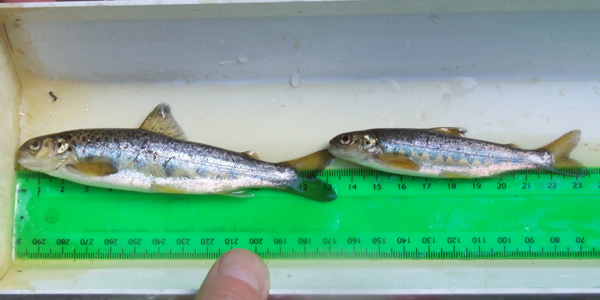 Salmon fry and parr (1+) from Culroy Burn (downstream of Culroy). 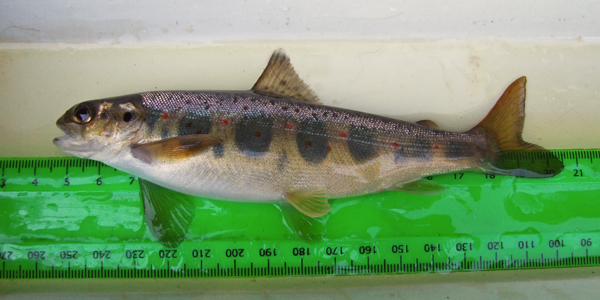 The 2+ parr that we caught and in great condition too.

I decided to look further upstream to see if we could identify any obvious problems and to determine how far up this burn salmonids can migrate. We gained permission from the landowner and set off to survey new territory. We fished a new site at the top of woodland between Knockdon and Otterden. I expected to find trout but wasn’t so sure about salmon. Salmon fry and parr were present in very low densities scoring E in the SFCC classification (very poor). Trout fry were absent but parr were D class – poor. Apart from being poor results, it was encouraging to find that salmon can make it this far up the Culroy. I looked quickly upstream below an old bridge and in another run and found another 3 salmon and a couple of trout. I should add we also caught one eel and a stickleback in the survey.

The Culroy rises on the Beoch Estate on the Carrick Hills. It is joined by the Garryhorn and Sauchrie Burns at Sauchrie. We decided to look upstream of the junction on both burns but unfortunately our new state of the art electrofisher packed up for some reason and this cut short our surveying. We did identify a source of siltation though and will return to investigate further once we are back in action (tomorrow hopefully). I headed back to the office to look at scale samples from our catch as Emma entered the data. I’ve added an image of a scale taken rom the largest salmon parr that we caught (144mm). It was a 2+ year old fish in great condition as is evident in the photo. 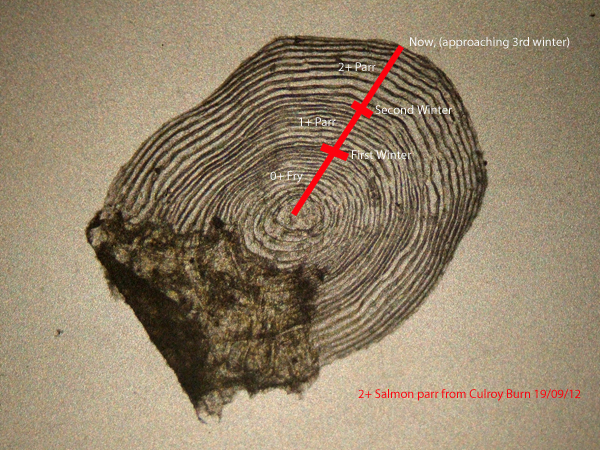 A scale from the 2+ 144mm salmon parr that we caught. The red lines show the winters as detailed.

I had a quick look on google earth tonight and have estimated the Culroy catchment to be around 16square Kilometres with somewhere around 8 kilometres of accessible habitat available for salmonids. It would be nice to think that we can find ways to increase the fish numbers in this system. I’ll make that one of my longterm goals. (It has to be longterm as the problems have been many years in the making so the solutions may take time too!)

We also came across a couple of small stands of Japanese Knotweed near Culroy and Sauchrie that I’ve assured the landowner that we will spray this year once we get a dry day.