First of all, I have to emphasise that this  post isn’t designed to chastise an angler for killing a hen salmon in October or November but rather to make sure simple misconceptions don’t lead to similar incidents occurring in future. Of course it is an anglers decision whether to kill their catch or not but I do feel clubs have a responsibility to set rules that they should be prepared to enforce. I’m not singling out any club but many don’t provide any guidance or rules on this matter and fewer still are prepared to enforce what they do publish for fear of losing members.

I received a call informing me of a large hen salmon that was killed on the Irvine at the start of November. (This river is open until the middle of the month). I expressed my disappointment that the fish had been killed and was informed that the angler had stated that ‘no one would have believed him’ if he hadn’t killed it. I was also informed that this fish was a bar of silver. I requested that scales be sent if possible and they duly arrived today along with a photograph. 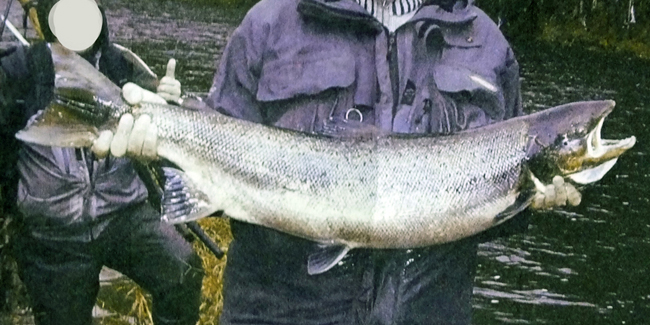 A 22lb hen salmon caught on the Irvine in November

Looking at the photo, I wouldn’t class this fish as a bar of silver. (I know the colours aren’t great in the photocopy but even so, that fish wasn’t as fresh as was described to me). The colour of the fish may not be as dark as some we see killed each year but as we are only a few weeks off spawning time, I expect that the roe was well developed inside. Looking at the fish more closely, the belly clearly is bulging with eggs and the vent appears distended. In my opinion, I would call this fish gravid which would under the Salmon and Freshwater Fisheries (Consolidation) (Scotland) Act 2003,  make it an offence to kill it. Of course this can be debated until the cows come home, but opening the belly up must surely have caused the angler to question his actions.

A fish of this size could easily have produced around 15000 eggs at spawning time. Time of year is just as important as the colour of the fish when determining whether to return it or not. Killing fish of this size at this time of the year as a trophy is difficult to justify even if it were the only one the captor had caught this season. Should anyone wish a trophy of a fish then take a camera fishing or even a mobile phone if a camera is too bulky. A snaphot will surely not cause any guilt at a later date.

I am aware that some club members were not happy about this fish being killed. Perhaps it is time to change Club’s constitutions to include the compulsory return of all fish in November and all hen fish in October? At the moment, 9 new candidates are in training to become bailiffs on the River Irvine and I hope that once they are qualified that they will clamp down on any angler that takes a gravid hen fish or unseasonable fish. It is not an arbitrary matter, it is the Law of the Land. Attitudes need to change and I expect a stern rebuke with a final warning from a bailiff may help this process. No one wants to stop anglers enjoying their sport but when stocks have declined across Scotland over the last 20 years or so, then surely this kind of killing has to stop. The problem often lies with older rather than younger generations.

Finally, I looked at the scales today and the fish appears to be at least a 2.3+ fish.  I suspect that there is another year hidden in the freshwater part of the scale (near the centre) but as I only looked at this in detail tonight on the computer I can’t be certain. I’ll check it again tomorrow to be sure and update this post if necessary in which case it will be a 3.3+ fish. (6+years old). I’ll include a photo of the scale.

I know this post may not go down well with some readers but my purpose is to maximise the stocks in the rivers to ensure we always have plenty of fish to catch. I am not against killing fish but consideration should be given to the fishes condition and also its reproductive potential. Killing the occasional grilse is far more sustainable than large multi sea winter fish such as this one.