Low water and sunshine were the order of the day at Kilmarnock Water today as the team set about removing as many fish as possible from the town stretch where the contractors MBV, are about to recommence the storm water overflow works. 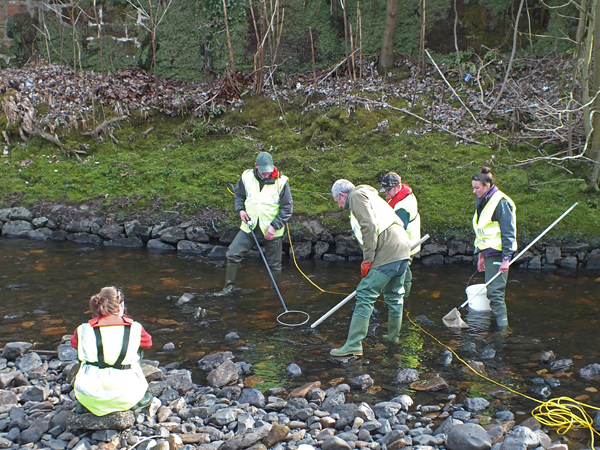 MBV had a terrible time last year battling to complete the work in adverse conditions. Almost constant rainfall led to elevated flows most of the summer and autumn and I’m sure many will remember the terrible spate that led to an excavator and 2 dumpers being inundated and lost (check previous posts on this blog for more details). Towards the end of the year, it was decided that MBV would stop working and await better conditions in spring 2013. Next week the contractors plan to start working back in the channel so once again the Trust stepped in to rescue as many fish as possible from the site. Following a massive fish clearance last year and a reduction in the width of the river, we weren’t sure how many to expect this spring. After day one’s fishing we completed about half of the task and I’d estimate that we caught between 500- 600 trout and salmon,  approximately 30 eels and a few stone loach and minnows. We were surprised how few minnows and loach appeared but we aren’t concerned at all by this. We were also pleasantly surprised by how many salmonids were in the stretch. I suppose fry that were still in the gravel when we fished last year have managed to survive well but I expect there has been quite a number washed downstream by the many spates too. Trout have done very well this year making up the bulk of the catch at around 400 for the day. There was a good population of trout last year too and given the reduced competition, those that were left behind or moved into the site have thrived. 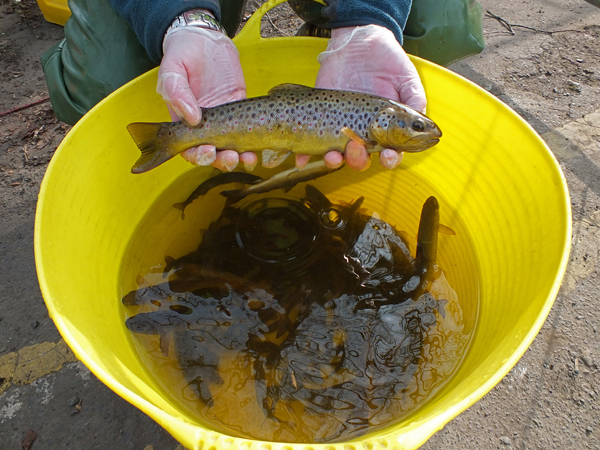 A good sized wild brown trout that emerged from below a rock. There is no shortage of wild trout in this river and it's nice to see that stockies haven't featured in our catches at all.

We noticed quite a few salmon were beginning to smolt yet we didn’t see many trout smolts this year. Perhaps it is a bit early. 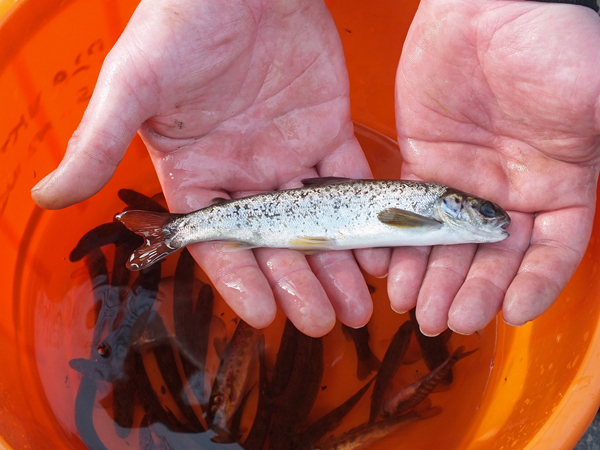 A salmon smolt. These fish will descend the river en mass in the next month or so.

Tomorrow we will be back in the river to complete the task and I think we are all hoping for another bright day like today. It is a welcome break from the long winter in the office. We suffered a minor breakdown with a hired van today which cut the day short as we had to get the fish back into their new locations on the river. I headed back to the office at 3.30pm with Gillian to invigilate the bailiffs exam (Gillian was taking the exam so that in future she can help with training). Meanwhile Gordon and Garry had to wait for the RAC to sort their van. They did eventually get home. 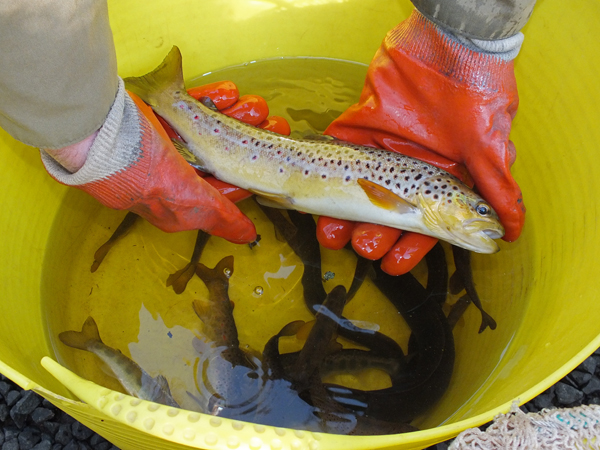 Another stunning wild trout. Who could ask for better than this from an Ayrshire river? Big stockies have no place in the rivers. 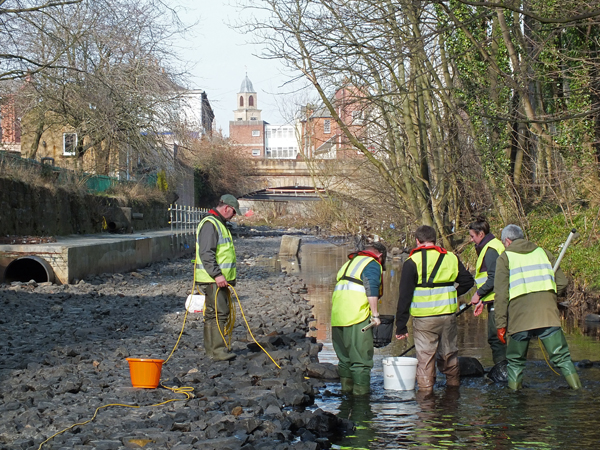 Working our way up the river towards Tichfield Bridge in the town centre. Who would believe that this is such a productive wee water? This photo clearly shows the contractors road taking up half of the river bed. This stone is laid on a membrane and will be removed from the river on completion in June.

I’d like to thank Peter and Garry for assisting today. The more bodies on this sort of task the better. Finally, we were all disgusted by the amount of litter and rubbish in the river and on the banks. We have spent a fair amount of time clearing Japanese Knotweed from this site and I think we will organise a volunteer day during the summer to clean up this beautiful wee river. The general perception is that i’s a mucky and polluted burn. Once the new storm overflow system is commissioned, this could be one of the cleanest and most productive areas in the Irvine catchment and it shouldn’t be abused and neglected. Anyone interested in taking part please get in touch with the staff.