A Strange Fishy Tale from the Doon

We received a call about dead salmon on the Doon last Friday. I asked Gordon to have a look for me and find out what had happened.An hour and a half later, Gordon returned with photos but none of us were any clearer what had happened to these fish.

In all about 10 salmon appeared in a wooded gulley downstream of Auchendrane road bridge near Minnishant about 2 weeks ago. They were discovered by a nearby resident walking her dog but the information only reached us on Friday. In the last week or so, some of the fish have disappeared and others have been moved about in the wood. Presumably they are all from the same source and are now being scavenged by wildlife. 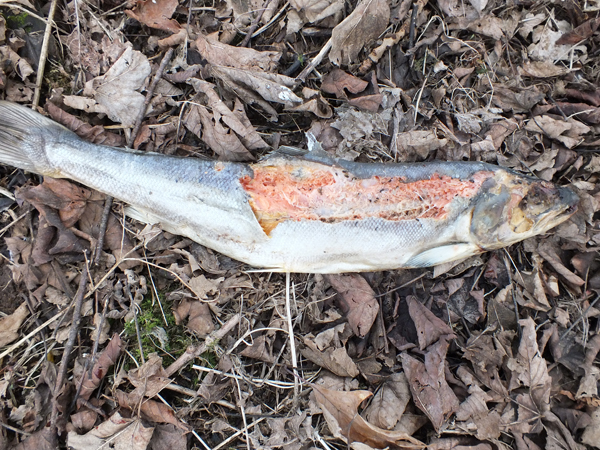 Most of the fish had been partly eaten by scavengers.

The grilse above was the brightest of the fish remaining in the area. I asked Gordon to open them up to check their condition at the time they were killed/died. He could only reach two of them so both were examined. One was male, the other female.  The hen fish was darker in colour and full of roe. So what happened to these fish? Why hadn’t they survived in the river to spawning. Well we can only guess at the reason whey about 10 salmon ended up in a wood, quite a distance from the river. 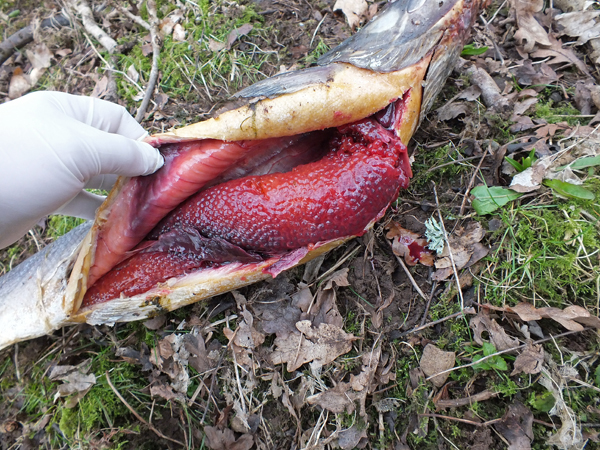 Initially I thought these fish must be kelts when we received the call but the well developed roe clearly indicates this fish hadn't spawned.

We can’t be certain what happened to these fish but lets look at the evidence more closely. Gordon collected scales from the fish. Scales can be misleading without details about the time of capture etc., so we can only make an educated guess based on what we see. The first fish pictured above weighed about 3 – 4lbs and didn’t seem to be terribly coloured. The scales revealed it to be a 2.1+ year old grilse as expected. (2 winters in the river followed one at sea). The growth rings didn’t show any closing that indicates slowing of growth or onset of winter. I don’t think this fish had been long out of the sea at the time of death and I’d guess that it was killed quite some time before winter.

The other fish shown above and below (around 6lbs), appears to be what could only be described as unseasonable and typically we see these fish in late September and October although there are in the river well into December after the season closes. I wouldn’t describe it as gravid as technically that indicates  as fish is about to spawn and judging by the eggs, this fish hadn’t reached that stage yet. It also was a 2.1+ fish but closing had started in the outer growth rings. This may indicate that it had entered the river sometime before being killed or perhaps only entered the river late in the season as winter was approaching. The dark colouration would support either theory.

So what explains them lying in a wood in March? There isn’t an obvious answer to this question. Had the fish been cut open and lacking roe, then it could be assumed that someone had poached them for the eggs to make putty but clearly this isn’t the answer. Gordon suggested that the fish may have become stranded in the burn after entering it in high flow for spawning but I don’t think these fish died at the same time of the year and the burn is not really what you could describe as a spawning burn, more a steep trickle. So what else could explain this? Why haven’t the fish decomposed or been totally eaten by animals? I don’t think they can have been there that long. They were first discovered around 2 weeks ago since which time they have been moved over a short distance. This has to be animals scavenging the carcasses. Decomposition is starting but not that far advanced as can be seen in the second photo. The flesh is still moist and shows little deterioration (but I don’t fancy eating it). The dry cold weather we have had recently will have helped slow decomposition. But if these fish were killed at some point prior to the end of October or even into November, they should have rotted or been eaten by now.

We see lots of dead salmon on the rivers following spawning and within a month they are generally desiccated and dry. Looking closely at the photos, the fins are unusually whiteish. This isn’t normal with the fish we see dead on a riverbank. I suspect this whiteness may be freezerburn that occurs when meats dehydrate in the dry atmosphere found in deep freezers. 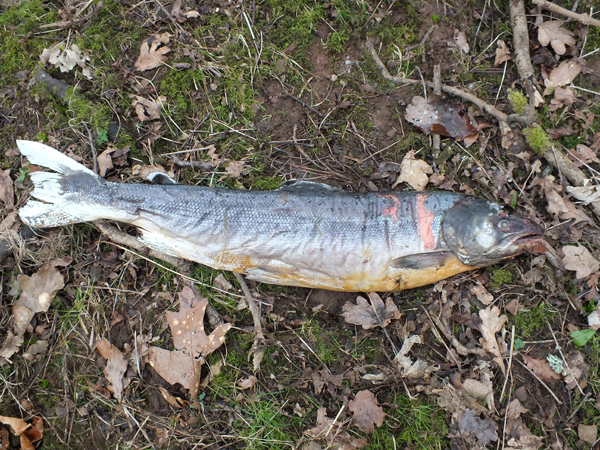 Could these fish have been in someone’s freezer?  This could explain why these fish appeared to be at different stages of their reproductive cycle  at the time of their death. Perhaps they defrosted in a power cut and were dumped? There may of course  another simpler explanation for this and I’d love to hear it if anyone knows!

I doubt we will ever know the reason these fish turned up where they did or why but what a shame that someone is still killing so many fish unnecessarily and worse still, killing hen fish near spawning time!