Our fly tying class got off to a good start last night and although we only had six people in attendance, all felt it was very worth while. We had two very experienced vicemen in attendance in David Ballingall and Peter Stewart. Their skills were put to use by teaching myself and Helen to fashion our first ever efforts from the vice but they also helped with some hints and tips for Kenny Murray and Willie Mcnish. Both had tying experience but more so the trout variety.

We kicked off with David and Peter giving us a demonstration and then moved on to let the novices have a go under close supervision, while Willie and Kenny tied something of their own. 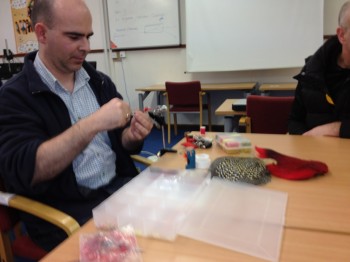 David then helped as I also attempted a Red Ally’s while Helen and Peter decided to opt for something new. This resulted in the creation of  ‘TheDownie’. (The Green effort seen in the last photo below) 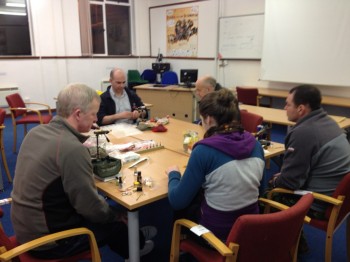 The group minus myself taking in some hints and tips 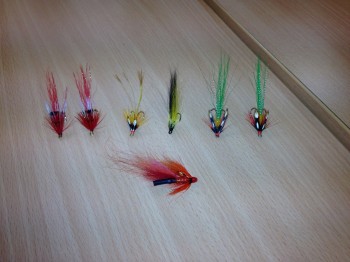 The final results...Not to shabby

Finally David showed us how to tie a Calvin’s Shrimp tube before we called it a night. We will be back at it again next Wednesday night so anyone wishing to come along please let me know.

← Fish Rescue Day 2 A Strange Fishy Tale from the Doon →