We receive notification that the Ayr eggs were hatching in Cumnock Hatchery yesterday. As we are heavily committed next week, I thought it best to lift the egg boxes we had planted in the river a few months ago. We also planted boxes on the Doon so that we can look at the results there too and compare the two rivers. These are due to hatch any day now so we will lift them soon too.

One of the problems faced when undertaking research such as this is to remain objective and impartial. That can be difficult when armed with other data especially as this often indicates that a research project is required and problems exist in certain areas. I know that I expected to find good results in some areas and poor in others but I have to say that I’m surprised by some of our findings so far. Of course we can’t draw any conclusions yet but it will be interesting to analyse the data.

In each box we place 100 salmon eggs. We couldn’t place eggs in the river on the day they were stripped due to high flows which would have been ideal as they are quite resilient to knocks soon after stripping. After just a few hours they become very fragile and can die at the slightest disturbance. We took great care transporting and handling the eggs to each location and replaced any that had turned white in transit. Effectively we hoped to be placing 100 viable, undamaged eggs into boxes at each site although it was inevitable that some losses would occur as the boxes were covered over. We anticipated that the losses would be similar at each location and therefore comparable.

When we arrived to examine the boxes today, water levels were extremely low due to the long spell of dry weather. Some boxes had been left high and dry in gravel banks and other were very near the edge of the river.

The first site we visited was the lower Greenock site. This was one of two sites on the Greenock Water chosen to act as controls as the Greenock suffers little from industrial or agricultural pollution. Cattle had obviously accessed the river in the vicinity of the egg box and a large amount of fine sediments were visible amongst the gravel. The box was opened and found to contain 82 surviving eggs. The only other egg trial I can compare this result with was on the Doon about 3 or 4 years ago when we had survival rates of 98%+. The survival this time on the Ayr may well have been reduced by the handling process and the time of planting. I think 82% was as good as could be expected. 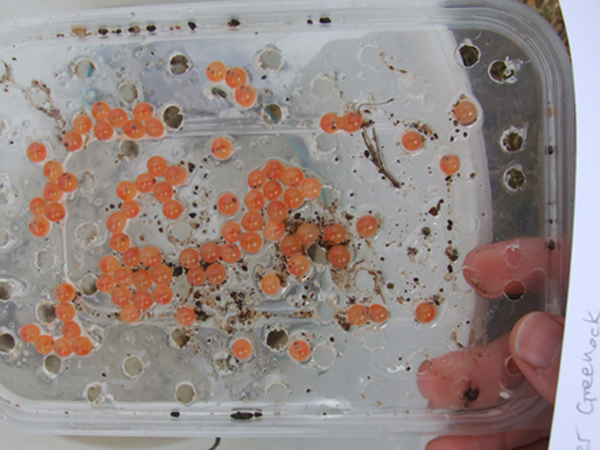 We moved upstream on the River Ayr to Nether Wellwood where we found the river to be in very poor condition. The water appears to be greenish and opaque. The gravel beds are smothered with algae and fine sediments. This site was always one of the most important spawning locations on the Upper Ayr since I first became involved with the Trust in 2005 but fry numbers have declined since then. It is still better than most other sites we electrofish. 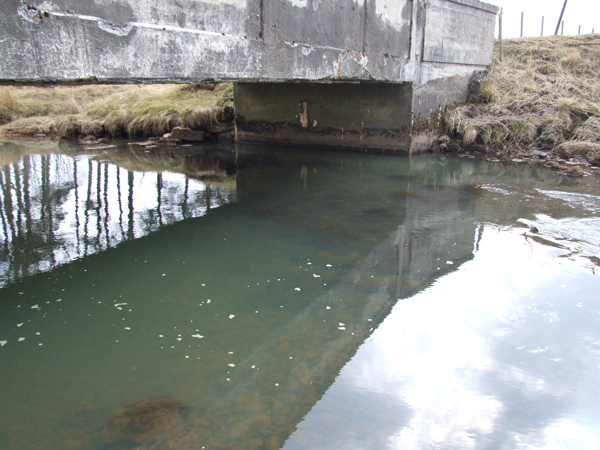 There was certainly a reddish tinge to the gravel that suggested iron oxide was being deposited. We dug up the box and found that most eggs had died. Only 15 survived out of the 100 placed. 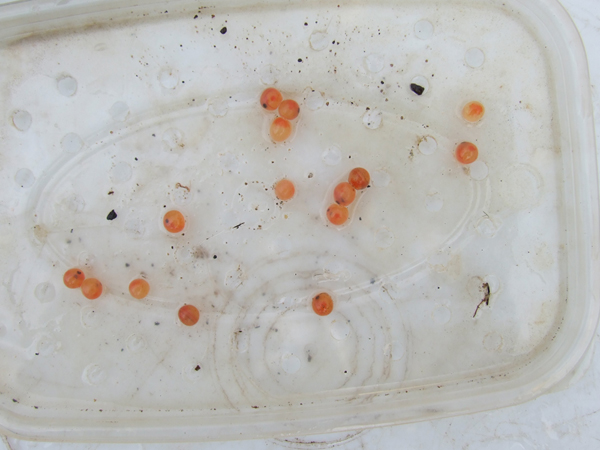 Further upstream at Upper Wellwood, conditions were worse. Unfortunately our egg box had been left high and dry on a gravel bank as the water levels dropped. 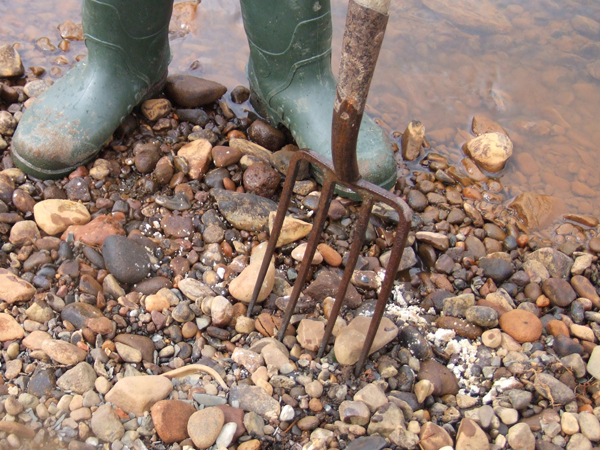 The egg box can be seen high and dry and partially exposed just in front of the fork.

This box was opened and to our surprise there were eggs still viable inside. The box was partially clogged with fine sediment that remained moist. Presumably water levels dropped below this point a week or two ago but none the less these eggs managed to survive possibly drawing oxygen from the atmosphere rather than the river. The total number of eggs surviving was 19. 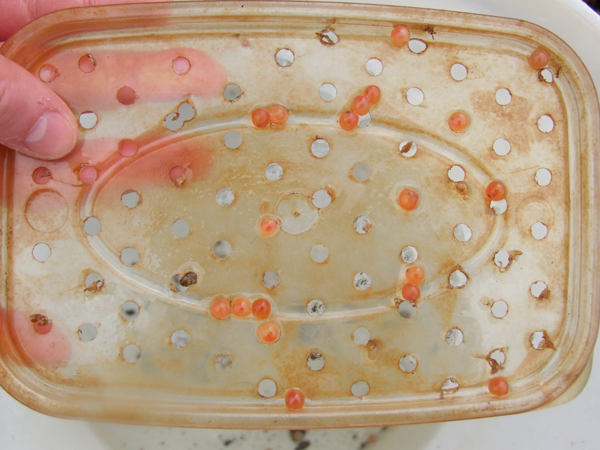 19 eggs from Upper Wellwood against all the odds.

From here we headed to the Upper Greenock to check our second control site. We expected this to produce the best results of all the boxes on the Ayr. Well we found the box and all seemed fine until we opened it up.  The gravel around the box appeared to be clean and I wonder if somehow these eggs were damaged at the time of planting. There was a quantity of fine sediment in the box but I don’t think this is responsible for such high mortality. I did say we were surprised by some results. 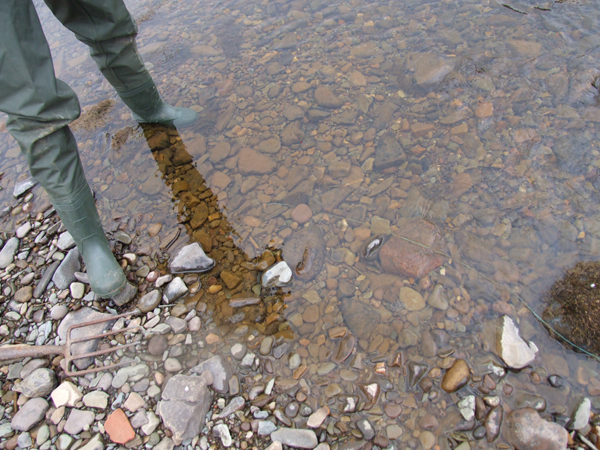 Everything looked good prior to opening the box!

We returned to the mainstem and headed to the Ponesk /Ayr confluence. The Ponesk has been recently diverted to what appears to be a high standard. High conductivity levels indicating high mineral/nutrient/heavy metal content had reduced to very low (for Ayrshire) following the cessation of  pumping lagoon water to the river early last year. We have high hopes that this will become an important spawning area once again. Surprisingly, todays conductivity levels were 20x higher than I recorded here last winter. I will need to investigate this further. The egg box was lifted and once again had filled with fine sediments flushed down the new channel. 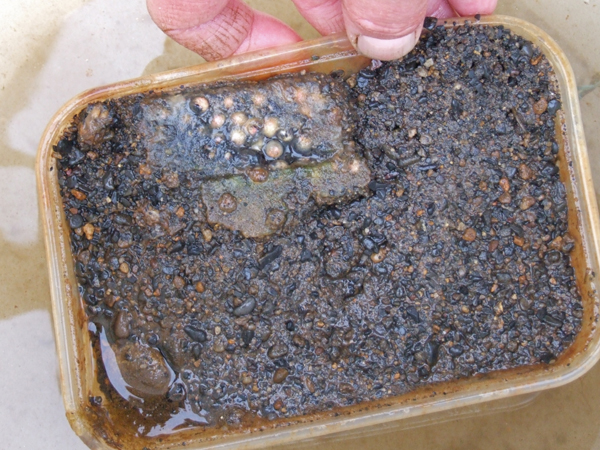 Fine sediment choking the egg box. Dead eggs were visible on the surface. 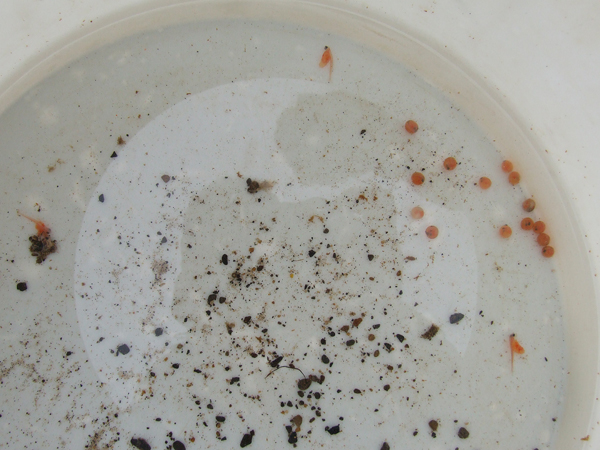 The temperature of the water coming down the Ponesk was a degree or so higher than the main stem. This is likely to be responsible for the eggs hatching before those at other sites. The River Ayr water comes from Glenbuck Loch and the temperature rises and falls slower  than the tributaries. I was disappointed with the Ponesk result as I had expected better. We saw a salmon up this burn at spawning time and know at least one pair spawned the year before, so hopefully a healthy population will establish through time as the burn naturalises.

The final site on the Upper Ayr system that we visited today was the Stottencleugh. This burn flows through historic and current mine workings into Glenbuck Loch. We saw a large number of trout in the burn at spawning time. These fish ascend the burn from the loch and we watched as they cut redds amongst the iron deposits covering the gravel. We expected most of these eggs to fail so we were keen to place an egg box here. 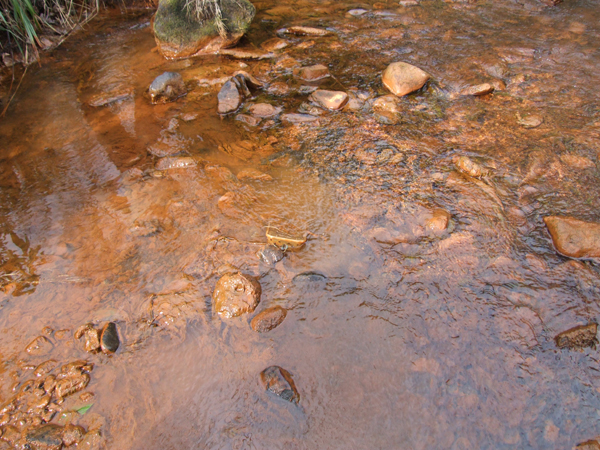 Extracting the egg box from the Stottencleugh Burn. Iron deposits coated everything and algal growth abounds. 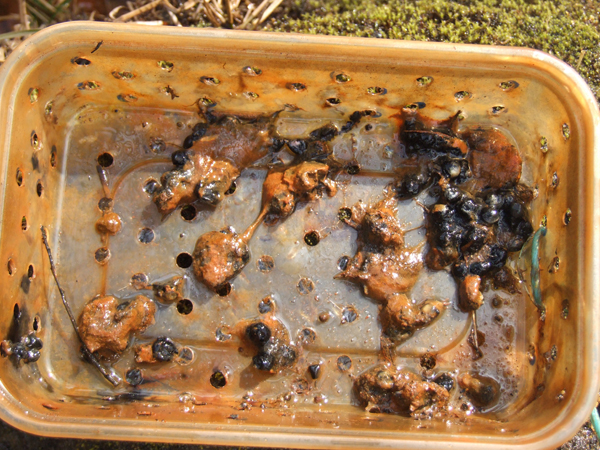 No survivors…. as expected.

As expected, this egg box suffered total loss. Most of the eggs had turned black or succumbed to fungus. The black colour indicates anoxic conditions in the gravel (lacking oxygen).

We then headed to the Lugar side of the catchment but I’ll post more on this tomorrow. I’ve met with SEPA to discuss pollution issues that appear to be affecting the salmonid population on the Ayr Catchment and they are keen to see the results from this trial although they don’t appear to have any funding available to assist with further investigations. We need to do much more research to pinpoint the exact sources of the problems that clearly exist. We will present our results to SEPA and seek their comments and opinions in due course.

I would like to hear from any anglers with historic knowledge of the Stottencleugh Burn. I remember this burn from around 1990 when it ran clear, or at least didn’t appear to suffer from anything like the level of pollution that it does now. Any anecdotal evidence that supports that this burn has deteriorated in the last 20 – 30 years will be appreciated and old photographs would be most helpful.

More to follow shortly from the Lugar and the Doon.