After terrible weather this week caused us to delay the Pundeavon survey, this morning’s forecast was correct and the sun was out and the wind had died to a light breeze. Perfect. The survey was necessary to identify the fish species present in advance of  the planned release of water to the Garnock to allow the reservoir to be decomissioned. The dam wall requires major engineering to make it safe and as it is now no longer required for water supply, Scottish Water intend to decommission the facility.

To survey this reservoir we needed a boat so that we could set nets and survey  non native plants and  invertebrates using an underwater camera. We faced a difficult launch and recovery may prove even harder but we are confident that we won’t have to resort to a tractor unless all else fails. 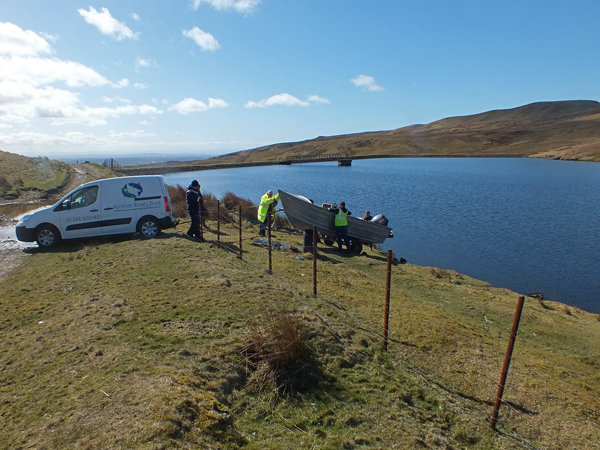 Lowering the boat and trailer to the water's edge with a winch.

Launching was tricky but the well thought out plan worked and the boat was soon in the water and ready to go. A minor hiccup with a fuel connection was quickly resolved and we set our nets at various depths. Unfortunately there is no other reliable method of surveying for a range of fish species so we had to accept that some fish would be killed but we intended keeping this to a minimum by checking net twice daily and releasing anything that was still alive. We were very concern that we may catch a lot of fish and we we may still but after the first day, we only netted 2 small brown trout. This is rather surprising as the loch has been stocked over successive years. Of course we haven’t finished yet and the plan is to fish different sized nets at various depths to ensure we have a representative sample. 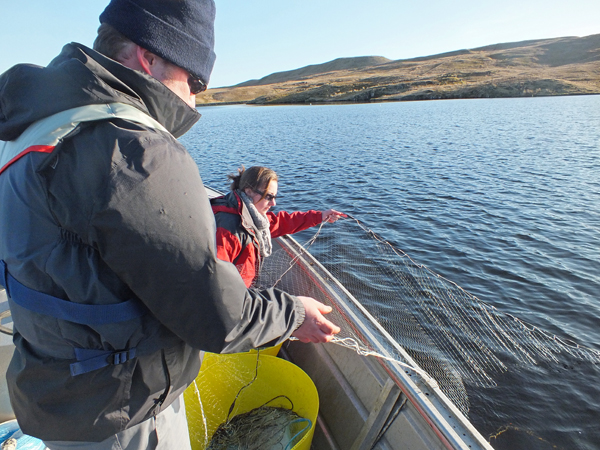 Pulling the net near the end of the day.

Unfortunately due to the delays we will be working tomorrow and on site from sunrise. Nets will be checked and reset and then we will commence the underwater camera surveys up and down the reservoir. We are looking for evidence of invasives such as Crayfish or Zebra mussels but we don’t expect to find any. Once complete we will again check the nets and reset them. We were told that roach may be present and we are concerned that these shouldn’t be allowed into the Garnock. We are also dead baiting for predators such as pike and perch but so far these have been absent too. Roach, perch and pike are in lochs and reservoirs nearby and can be transferred by birds moving between water bodies so it is best to check.

Helen and Emma set off surveying the margins and bank sides for plants. Not just any plants but again non native species that shouldn’t be there that threaten biodiversity.

We have to acknowledge Scottish Water for being proactive on the invasive species issues. We have worked closely with them in recent years to raise awareness and they have embraced our efforts and the environment team are regularly in contact with us whenever they have concerns. I wish all utility companies followed their lead. I’m sure they will in time.

Before the last draw of the day we took a breather in the sunshine at the top of the reservoir. It is a lovely wee loch and a shame that it can’t be retained for fishing at least but the costs don’t stack up. Once our survey is completed and the results known, Scottish Water will then be able to formulate their plans for a drawdown of water which may well include a fish rescue and relocation exercise. 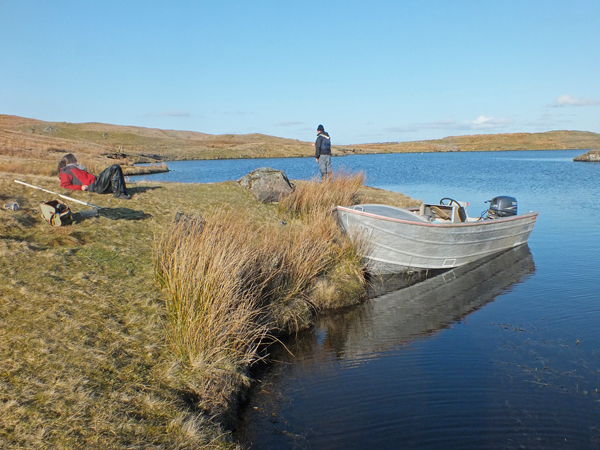 Taking a break near sunset.