After deciding that the fish were tight to the bottom following yesterdays results, we set the majority of the nets deep overnight. First light this morning we were back on site to check our  catch. We were beaten to the water by a lone fisherman who was already fishing when we arrived in the mist; now that’s keen. He didn’t last long though and left empty handed. 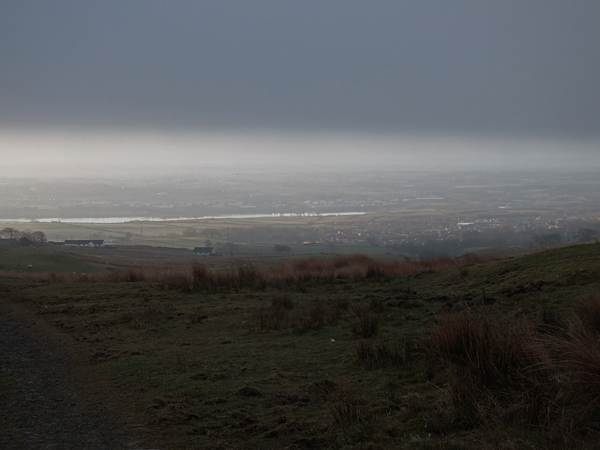 Sunrise but it was another couple of hours until the mist burned off. Later today we could see Glasgow to the North East and the Merrick, 46 miles to the South East.

Anyway, Helen and I set off   to check the first net as Gordon organised equipment for the rest of the day’s work. The first net held 6 brown trout in the 6 – 9″ range. We decided that we wouldn’t reset small mesh nets again as we had sampled that size range adequately and we don’t like killing fish just for the sake of it. We picked Gordon up and checked the remaining nets which were surprisingly bare bar for a couple more tiddlers. We understood this reservoir held a large quantity of fish and weren’t relishing the thought of killing big numbers as can happen when gill netting but as it turned out this wasn’t necessary/possible, much to our relief. We were concerned by the lack of the rainbows, blues or any other species but I’m confident that had they been there, we would have found some in the nets. We weren’t put off though but certainly weren’t filled with expectation for the rest of the day. 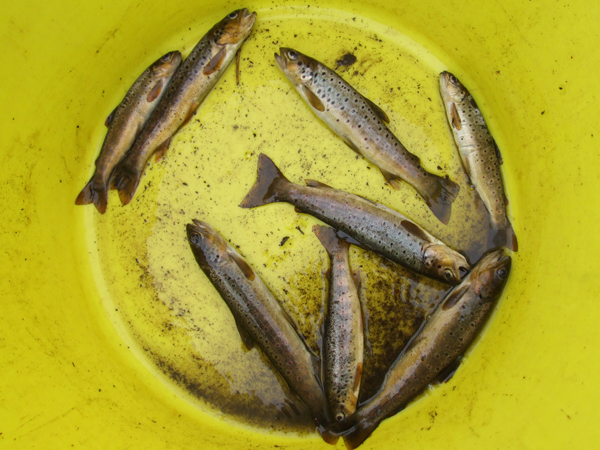 With the remaining nets ideal sizes for capturing stocked fish (1lb up to 4-5lbs and pike), we reset them in locations where anglers informed us were the ‘hot spots’. We stopped to cook breakfast and  took stock of what we had achieved so far and what we still had to do to be sure that all non native species were accounted for. (Gordon and I settled for bacon and egg rolls while Helen opted for a cheeky wee pan fried Brown Trout in hers). Hot food and warm coffee are essential when working dawn to dusk especially on top of a hill with a howling wind blowing. 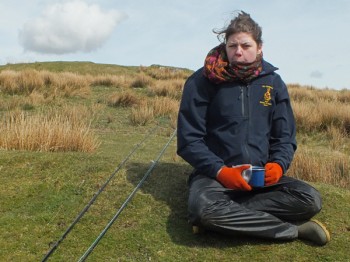 Helen warming up on a very windy day

We went back onto the water and using our drop cam, we surveyed a dozen transects across the reservoir. The bottom was barren with few features apart from the sheer rock faces that surround the depths. Fine sediment covered the bottom. At the deepest point we had about over 70′ of cable out. This is a deep wee loch! We saw very few plants near the margins and no fish whatsoever. By the time we completed this survey it was well past lunchtime and we again checked our nets. This time we had managed to catch a larger trout but it too was a brownie but  a stockie of around 14″ in length and very lean. Another couple more small brownies made up the rest of the morning’s haul; all were released hopefully none the worse for wear. An unusual capture came next and I hadn’t expected a toad to be swimming around at over 30 feet deep. The nets were again set in the shallow water near the inflow. By this time the entire reservoir had been surveyed repeatedly and a definite hotspot identified. 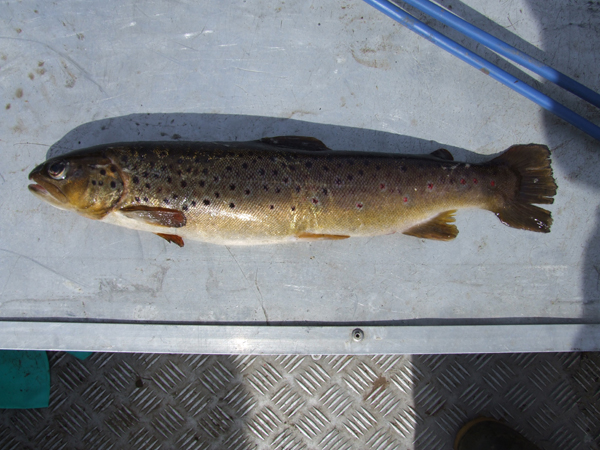 The only stocked trout captured

We had hoped to set a fyke net in the margins to catch eels but there were no areas shallow enough to allow us safe access. Minnow traps had been set and these filled up very quickly and we released them after photographing. Crayfish traps (under licence to SNH also failed to capture anything. We fished baited rods for pike, perch and roach. Worms maggots and deadbaits were all used but 6 rods failed miserably. Gordon and I tried fluff chucking for rainbows for a while but over the two days we didn’t see a single fish move on the surface and nothing came to either lures of traditional flies. 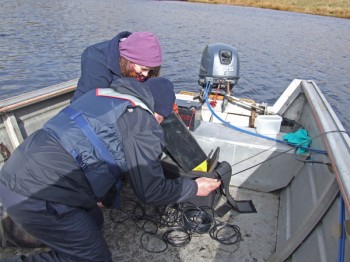 Surveying the bottom with a drop camera.

By the end of day two and the final draw of the nets, I decided that the wind was increasingly making it difficult to control the boat and manage the nets at the same time and called a halt to our netting survey. The final tally for two days hard work was just 15 wild brown trout up to 9″ (most 6 – 7″), 1 stocked brown trout of around 14″ and a wild brown trout at 12″.  One toad. Numerous minnows. ( The total number of fish killed during the survey was 14 over 2 days. The forecast is poor for tomorrow and I’d like to discuss the options with Scottish Water before continuing. I doubt if further netting will reveal more than we have already concluded. 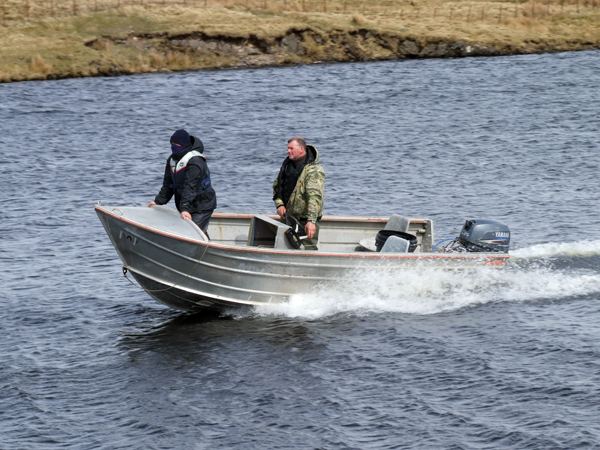 Heading out to set nets.