While out looking at Giant Hogweed today, I was reminded how important it is to be careful when out and about.

I had been checking on an area known to be infested with Giant Hogweed. We have been controlling Giant Hogweed in this area for a few years now but a dense seed bank has been mounting up in previous years and the seeds can be seen lying on the ground amongst the plants. These seeds are thought to be able to germinate up to ten years after they have fallen from the plants.

Seeds  from Giant Hogweed, Himalayan Balsam or even small fragments of Japanese Knotweed are easily picked up. Simply brushing down your clothing and footwear stops you from spreading these to new areas.

Today as I left the site I took off my boot to give it a good brush and found a Giant Hogweed seed stuck in with the mud on my sole. Had I not bothered to take the couple of minutes to brush my boots this could have been transported to a new area and started off a whole new infestation. It’s that simple. 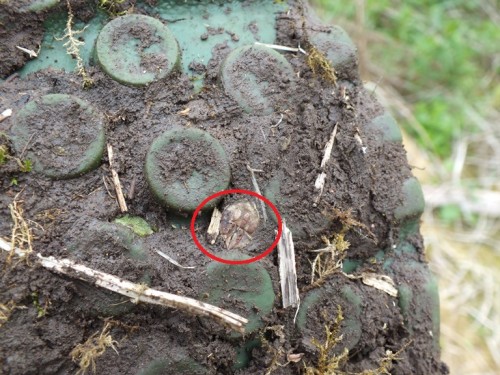 The three plants are examples  that occur on all of Ayrshires rivers. However, Himalayan Balsam for example is not present on the River Ayr. It would be very easy for anglers or walkers to spread seeds from this plant from the River Irvine if they fish or walk on both rivers. Simply brushing down your equipment before you leave will stop this from happening. Give it a try, it only takes a couple of minutes.

There are more biosecurity measures that we must adopt to stop the spread of invasive non native species and other diseases. It is now common practice for anglers to disinfect their equipment before leaving their chosen venue. This is a practice we are keen to see adopted across Ayrshire. With the threat of American Signal Crayfish on our doorstep it is important we take measures to stop them entering Ayrshire. This is only one other example, there are many many more.

It is worth taking a look at the website link below which provides much more information on stopping the spread of invasive plants and animals in British waters.