It has been well reported in the past years that the River Ayr salmon stocks aren’t what they should be so in order to assess the productivity in the good areas, we have been revisiting some established sites that haven’t been surveyed for some time and also looking at new sites in particular areas where we lack knowledge . One burn that we haven’t fished before was the Polkebock that rises near the Slot Burn between Meanlour Hill and Middlefield Law. With the Greenock becoming increasingly important to salmon recruitment as the main stem River Ayr struggles, then it seemed sensible to have a look to see if salmon use the burn for spawning. After a short tramp across moorland in the sweltering heat, we picked a couple of sites and set about fishing. I’m pleased to report that we found that salmon are present and can penetrate well up the burn. The numbers recorded weren’t high however this is another burn that helps to boost the Greenock’s productivity and therefore is important to the whole system. We fished two sites, both in the lower 1.5km of the burn and both had salmon. The keeper informed me that he has watched salmon near the top of the burn so there doesn’t appear to be access problems.  It will be interesting to see how many redds we can count at spawning time.  There were good trout numbers too and some a decent size. 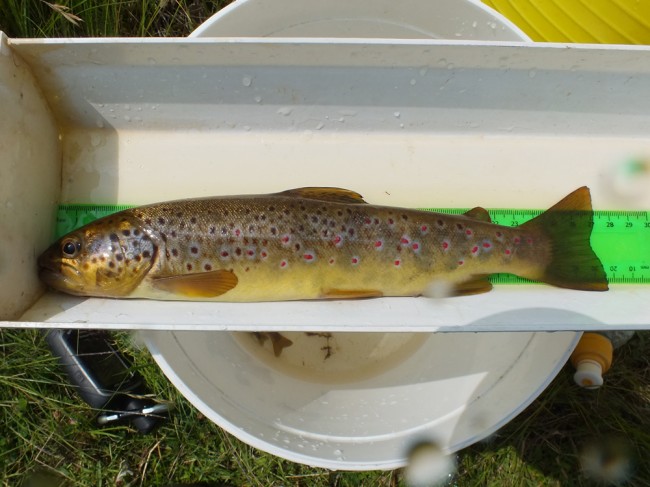 The largest trout we captured from the Polkebock Burn 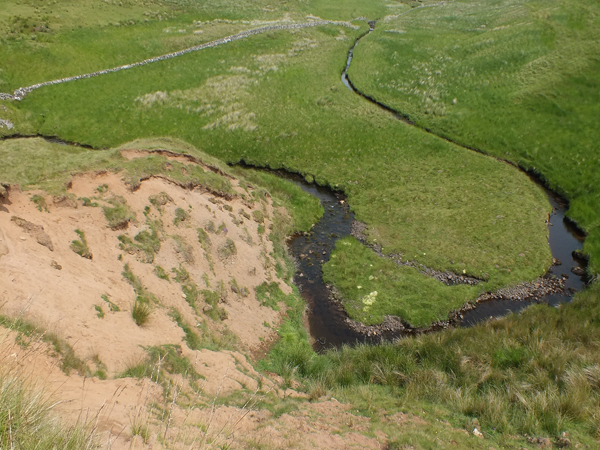 Looking down on the Polkebock

Elsewhere on the river we have noticed that upper reaches have produced slightly better results than in recent years. This doesn’t mean that everything is rosy but I am encouraged by a few sites at least. Nether Wellwood has been under performing for a few years now but this years results were excellent despite the conditions of the gravel and the obvious enrichment. Underfoot the gravel was solid and immobile and this is probably due to the iron deposits that also cause the greenish colour in the water. I know SEPA feel this has been a long term problem for the upper Ayr but we have noticed this area deteriorate over the last 6 years or so. I remember looking over this bridge regularly watching shoals of grayling but you would be hard pushed to see anything now. The grayling don’t appear in our catches and anglers comment that they have disappeared from this area. There is a marked reduction in water quality downstream of the old Kames Colliery. The reed beds are doing a great job but obviously don’t catch everything from the old mine workings and over a very short distance the river changes colour and the gravels deteriorate. 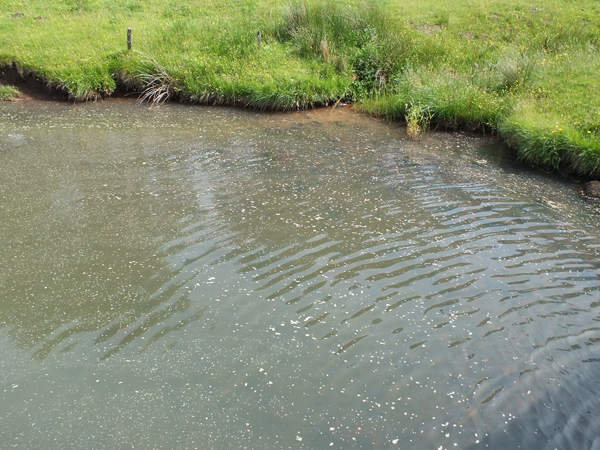 The conditions we found at Nether Wellwood weren’t encouraging

Other areas that showed increases included Stairaird in the middle river and Old Howford Brig where we found improved fry numbers. There may be several reasons for this, not least that the flow is so low at the moment that the fish are more concentrated and therefore easier to catch but other factors such as improvements to water quality as a result of SEPA’s work on diffuse pollution,  the reduced activity of Surface mining and the increased water levels of 2012 and early 2013 that may have diluted pollution and allowed more fish to reach the upper river could all be factors. 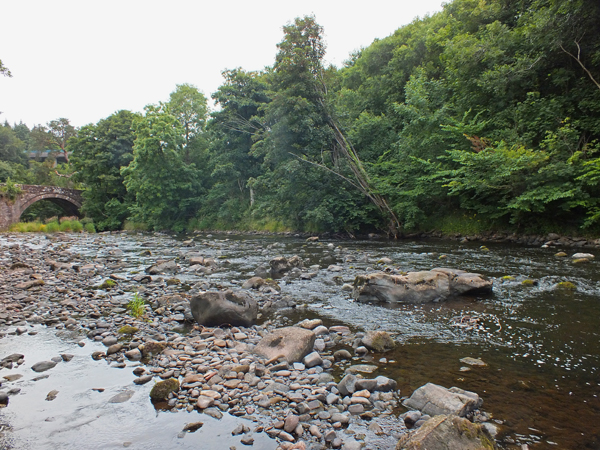 Our site at Stair is normally a parr site and this year was no exception but unusually we found several salmon parr that  appeared to be smolting We also found similar parr at Oswalds bridge further downstream. If this is correct then these fish are heading to sea much later than the main smolt run and it would be great if we could work out where these fish were produced in the system although this may not be possible given the time and resources we have. 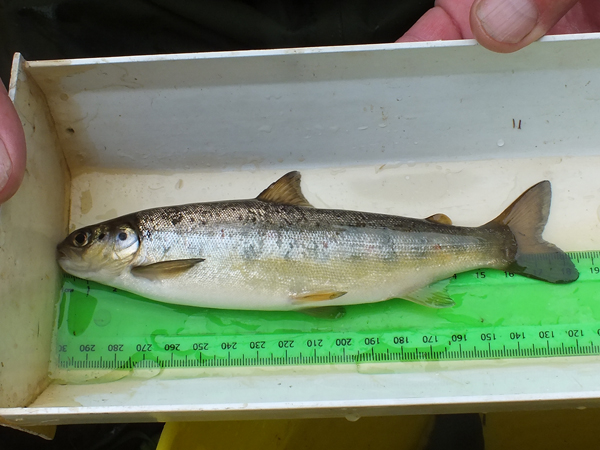 We paid a quick visit to the Ponesk to see if salmon had managed to spawn there last winter. I did see a salmon on one visit but only one so I hoped for good results. As Scottish Coal is in receivership at present, we only fished one site as we will not be paid for this survey but it is important to continue to monitor the recovery of the burn. We found salmon fry and parr although in low numbers but this is encouraging. salmon are using this burn and it is only a matter of time before numbers increase as water quality is good. The trees that were planted are doing well and it won’t be many years until this habitat looks much more natural. 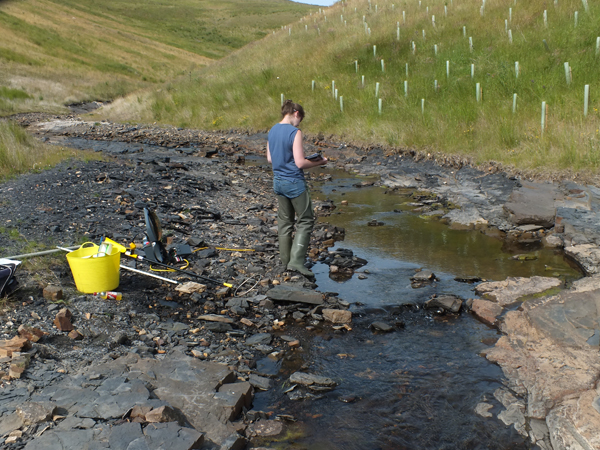 The upper river lacked a timed site so we have established one downstream of the Ponesk confluence where there is good gravel and pool habitat nearby so we expect this area should be well used for spawning. We know the condition of this habitat has been poor and heavily coated with iron oxide and algae for a couple of years but on the day we visited, things were looking better. After electrofishing we ended up with a reasonable catch consisting mainly of salmon, very small salmon but salmon none the less. I think the smallest fry I’ve ever recorded came from this site at 27mm long! 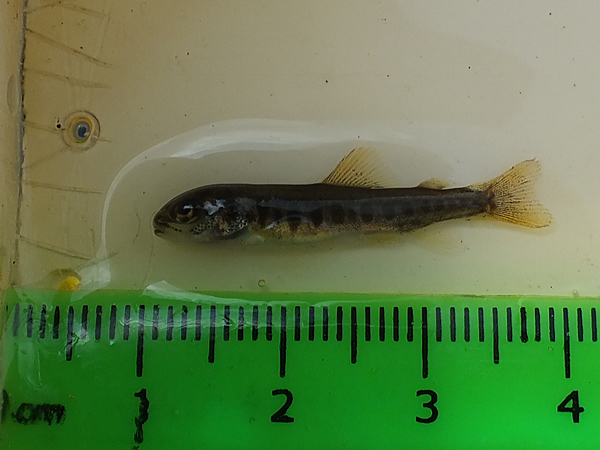 Our egg box trials indicated that survival was poor in most main stem areas and although not conclusive it makes me wonder just how good this river could be if the problems that exist can be solved. I hope to repeat egg box trials on the Ayr and Doon again later this year as I think last years results raised many questions worth further investigation.  I would also like to try experimental gravel cleaning in advance of spawning to see if productivity can be improved. I’m sure sites such as the new one downstream of the Ponesk would be ideal for this type of management.

The Lugar electrofishing surveys are still to be completed but with one exception appear to be as expected. The surprising result we had was downstream of the Ochiltree Weir where fry numbers were excellent for the first time in years. Again I suspect this may be linked to the very low flow concentrating the fish into a smaller area but there could be other reasons for the improvement too.

We will be electrofishing for a couple of months at least and eventually analyse the results in detail and produce our reports but in the meantime I’ll keep updating the blog with anything interesting that we find.