ART has now resurveyed the River Doon and are preparing maps to illustrate the reduction in Japanese knotweed and Himalayan balsam along the length of the river. Both species have reduced since we commenced control in 2010 so all in all a good result but we aren’t finished yet and we will be continuing control until the end of 2014 using funding from the CIRB project. Originally the funding came from SEPA and the DSFB but we have capacity to continue this in the larger project freeing up the DSFB resources for other essential improvements. Hopefully Gillian will have the maps ready early next week and we will upload them to the blog for all to see. (Gillian is our resident GIS mapping expert!). Well done to Emma and Gordon for walking the river and completing the surveys so quickly.

Of course we still plan to complete similar re surveys of all our rivers and Emma has been on the Annick and Irvine too. By the end of her short term contract she will have walked miles and entered masses of data so we are grateful for her determination. (Emma was with us last year too so is a very experienced INNS surveyor by now).

Recently I reported that Gordon had found a difficult to reach Giant Hogweed plant near Howford on the Ayr. 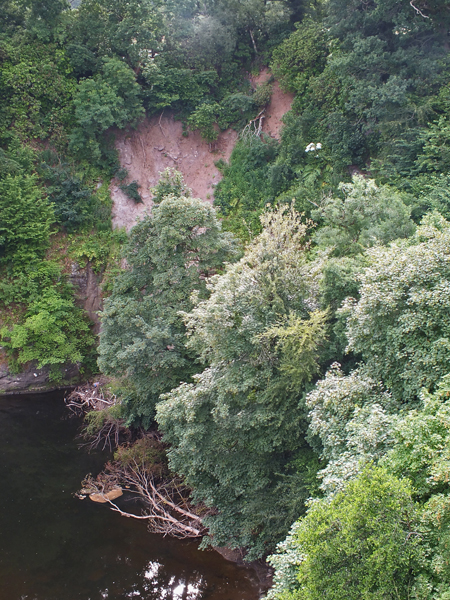 Difficult to reach and a good head for heights required.

This afternoon, Tom Halliday, (our sub contractor that has done a fantastic job on the Ayr this year) decided that conditions were suitable to descend the cliff and treat the plant. I watched from the Howford Bridge as Tom rappelled across the face to the target. Once he reached the giant plant, he quickly removed and bagged the developing seed head before applying a lethal dose of our favourite pesticide. The bag was hauled up by his men and Tom climbed back to safety. Job done! This kind of commitment is beyond the call of duty and we can’t thank Tom enough for sorting this out. Had the plant seeded, the entire landslide and cliff face may have become infested and this would have been a disaster and extremely difficult and expensive to control. Here a few photos of Tom in action. I took a couple of video clips that I’ll upload once I’ve edited them. 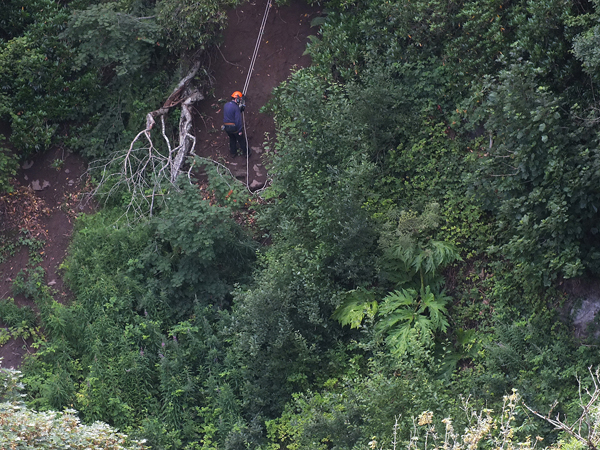 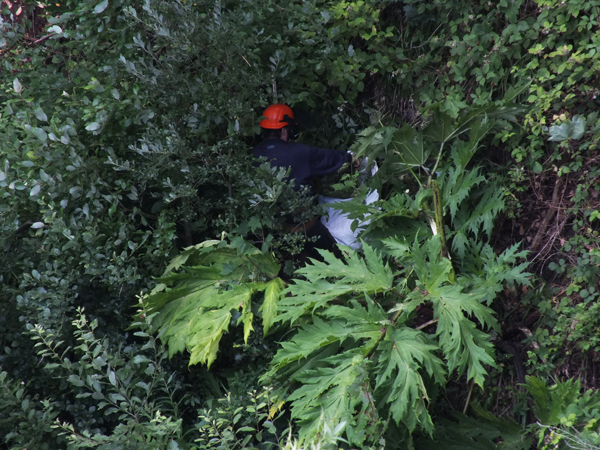 Bagging the flower head and preparing to spray the rest of the plant.

More details of of recent weed control to follow shortly.