We fished 2 sites on the Palmullan Burn following yesterdays initial visit. The first site was an old one last fished by Alistair Duguid in 2004 so I was keen to see how the trout population was holding up. At the time when last fished, the DSFB hatchery was stocking salmon in this area but this ceased some time ago as the hatchery has been out of production for 4 years now. It ‘s a bit of a scramble to the site it is always but nice to visit new places.We tried to pick the same site as Alistair had fished from his description and I’m sure we weren’t more than just a few meters away.

Our results haven’t been analysed yet but I expect they will be consistent with Alistair’s surveys. In total we caught over 50 trout from the site today and I think this is reasonably good for the habitat and what I expected. The trout were typical burn trout, often with a white edge to their anal fins as we often see in upland tout. We did come across the rather unfortunate wee fish in the photo below but he had survived so far and I didn’t have the heart to euthanise it.  After all, I’m sure he will make a welcome meal for one of his larger relatives in time. I expect this congenital deformity may be due to a degree of inbreeding as can happen in isolated populations, although it could just as easily be a one off. 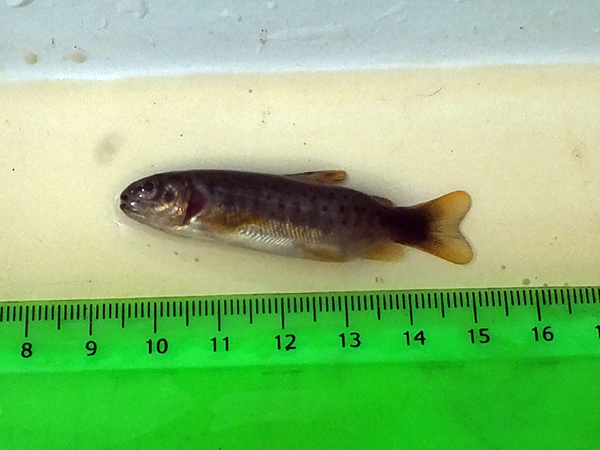 A stumpy wee trout. Both gill covers (operculum) were short leaving it’s gills exposed. Despite it’s challenges, it was doing quite well and it wasn’t the smallest fry we caught at this site.

After lunch, we headed downstream of the waterfall that I mentioned in yesterday’s post. We established a new site at the upper edge of the floodplain. This site is accessible to salmon and we expected good results and weren’t disappointed. With the first sweep of the anode, about 6 fry appeared and we knew instantly that we were in for a big catch. Again the results haven’t been analysed and off the top of my head I can’t remember the total numbers caught so I won’t speculate. I’m not certain that we even totalled the numbers up as by the time we finished, Gordon’s root canal appointment at the dentist was pressing and despite his best efforts to delay me, we finished the survey and headed for the van. We will have to return tomorrow morning to finish the habitat survey but that’s ok as we are back in the area anyway. Gordon made his appointment…. ouch! Hahaha. Sorry Gordon, but you’ll feel better tomorrow.

I really enjoyed my first day on this wee burn. It really has character and pools and pots abound. As soon as the topography rises at the edge of the flood plain, there are numerous cascades and small waterfalls between deep pools. I met the farmer who informed me that his grandfather used to catch a few salmon from the falls pool years ago but they didn’t see them nowadays. I wonder if the route to the falls is blocked as we saw tonnes of fallen trees causing a log jam below the falls pool yesterday and it looked as though it had been there for years. He also reminisced of swimming below the falls as a child. “It is very deep” he assured me. I don’t doubt it.

Another interesting wee fish came to our nets during the second survey. As soon as it surfaced, I realised it was a curio and couldn’t wait to see it when we measured the catch. Of all the parr we caught, it was the last to come out of the bucket and was hard to catch with the hand net so it was obviously pretty agile despite it’s deformity. It looked like a fancy goldfish in trout colours. See for yourselves. 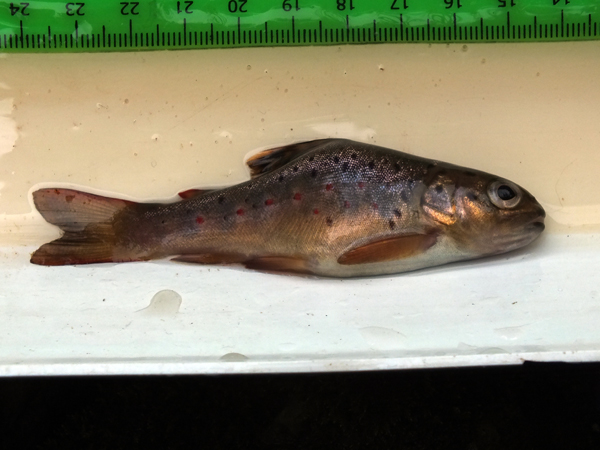 Almost resembling a fancy goldfish, this wee parr is perhaps the weirdest looking trout I’ve ever come across.

I have to question whether it is coincidence that we found 2 deformities in just 2 surveys on the same burn? I’ll watch out for this the next time we fish this water. The salmon were very varied with many long and lean but others appeared to be much stockier. I am amazed by variety in the fish we found. 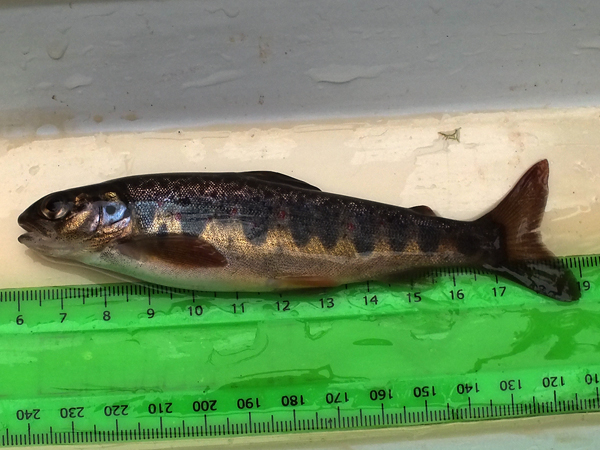 A very well proportioned parr. If this retains this shape as it matures it will be a lovely looking fish.

I must try to pay a visit to the burn during spawning season as I’m sure there will be plenty of activity to see.