As always when moving between catchments , we started the day disinfecting every piece of equipment that comes into contact with the water. We have a tank full of Virkon, an aquatic disinfectant, at the office and anglers wishing to use it are welcome. Just give the office a call. 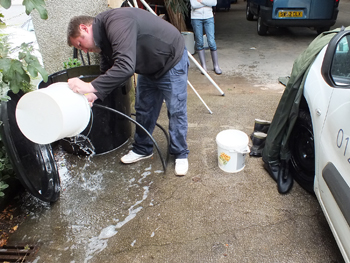 Gordon disinfecting the equipment and nets before we set off.

Once ready, we set off with Sarah, a regular volunteer, for the Glenmuir to fish one of the most productive sites on the Ayr. As usual, it’s too early to say anything as the results haven’t been entered into the database yet but I do expect the fry results to be below average, however the parr numbers may be up (I left the paperwork in the office this evening so can’t be certain). As usual, trout were few and far between at this site but we did catch three fish that appeared to be stockies. 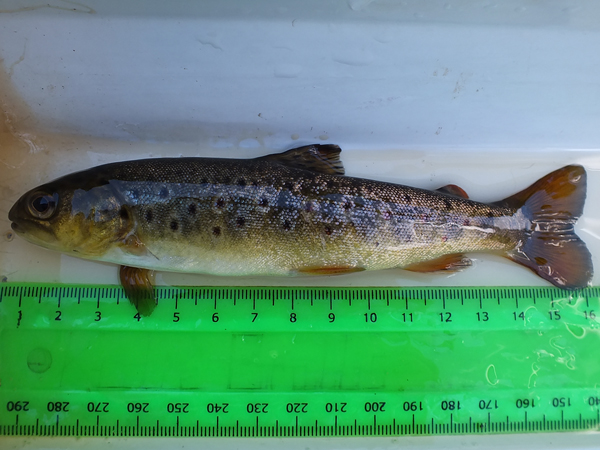 A poor condition trout. Scale samples confirmed that it was almost certainly stocked. 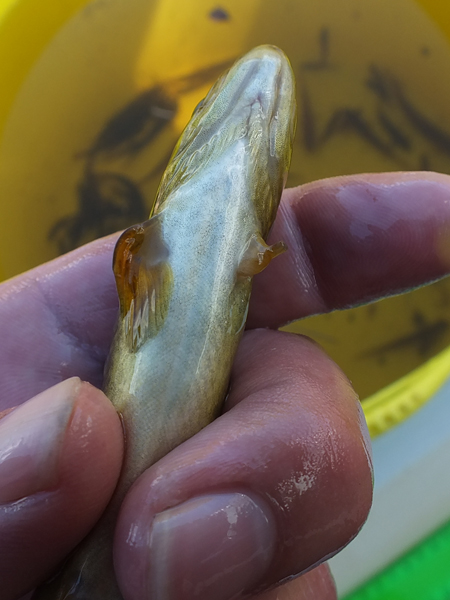 Typical deformed and stumpy fins that reveal it’s a stockie

Once again, I find myself questioning the value of putting trout into one of the most important salmon spawning areas in the catchment. There is a natural trout population that seems to be very stable and the deeper pools all have resident trout. Last years electrofishing turned up some lovely trout in deeper areas but it was closer to spawning time due to high water levels delaying the surveys. See last years blog posts during September and October. I don’t expect the Glenmuir in this area will ever have a high demand for trout fishing so I don’t really understand the need for stocking here. I took scales from one to confirm my suspicions. The picture below shows the poor condition of this fish.

The Glenmuir has long been associated with gravel removal. Unfortunately, this activity isn’t legal as the owner of the riverbank hasn’t given anyone permission to remove gravel. Earlier this year the bailiffs caught someone with a tractor in the river, this is illegal for different reasons. Today we arrived to find yet another instance of gravel removal. At least this time the gravel had only been removed from the dry bank and this is acceptable, however, permission for this wasn’t obtained. The bailiffs are keen to gate off these access points to prevent damage to the redds in these areas.

We headed back to finish off the surveys on the  Glenmuir this morning. I thought I’d follow up yesterdays post with a couple of images of trout that we caught today. The first picture is of a wild trout electrofished from a glide about 40cm deep. It came from below a large boulder. We had another nice trout from this site too. 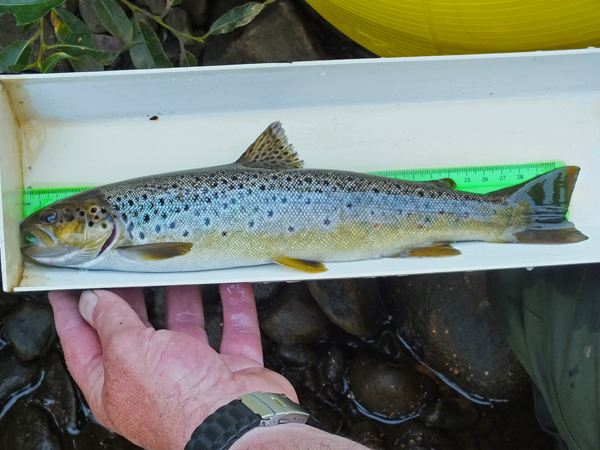 A cracker of a trout from the Glenmuir and as wild as can be.

Later in the afternoon we fished a run further downstream and again caught a couple of nice wild fish. We also managed to capture half a dozen stocked trout ranging between 4″ and 7″. The photo below shows 2 wild and 2 stocked fish. The density of wild trout is normally low on the Glenmuir however I fear there are plans to change this given the number of stocked trout we have come across. 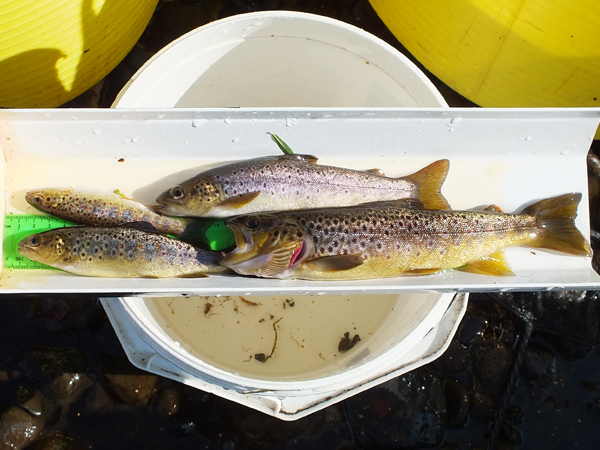 2 wild (larger) and 2 stocked trout from the Glenmuir.