We failed to find salmon fry or parr when we electrofished the Carrick Lane and Garple Water today. This was disappointing as the Doon DSFB hatchery has previously stocked the area until 2009 with fry and we had hoped that a self sustaining population would develop. Of course there may be many reasons for our failure and salmon may well have successfully spawned somewhere but it doesn’t look as though they were at our regular sites and where we would expect them. 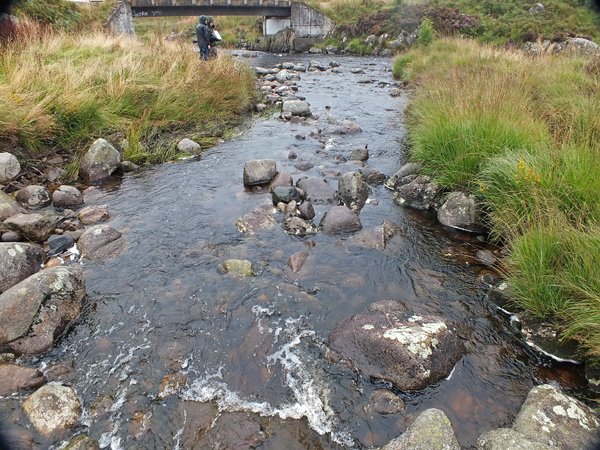 Our electrofishing site at the Carrick Lane.

Acidification has been identified as a problem but so too is access to and from the loch. In recent years the numbers of salmon entering the loch through the ladder at the dam has been low varying between 12 and 23 (from memory). Not very many salmon to populate miles of burn!

Earlier this year we were informed that anglers were targeting the burns for salmon and trout parr to use as bait for pike. With this in mind, we decided to fish a new site just upstream of the loch on the Garple as I thought it would be reasonable to expect that good habitat here should certainly produce trout parr. It didn’t. Quite why not is only conjecture but the lack of parr and trout fry is worrying although we did find them further upstream at our other site. 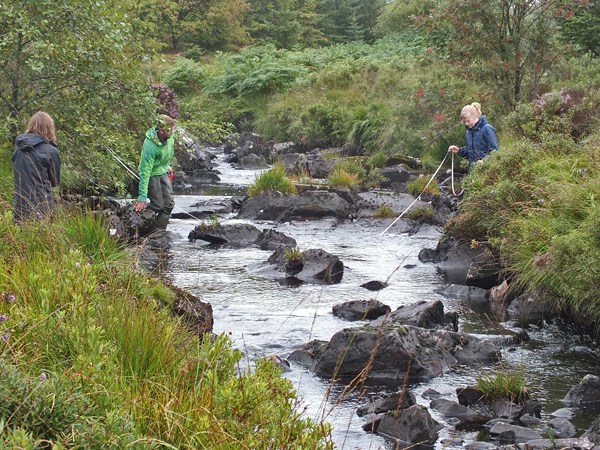 Struan with Joni and Sarah taking site measurements. Joni is on work experience and Sarah is an under graduate volunteer. We are grateful for their assistance on such a wet day. It’s a hard route through plantation forestry to this site when carrying a generator and control box. We need our backpack set back urgently.

All in all a disappointing result from an area that should be productive.

← A New Burn for the Trust to Survey Rivers Conference →