On Thursday evening I discovered that the Cummock Burn had been polluted by an an known source. By the time I found out about this it was already dark and I was aware that SEPA had been informed by a local angler so there was nothing more I could do until Friday morning. Here’s a photo taken on Thursday at 2.00pm (ish) by the angler that reported it to SEPA. 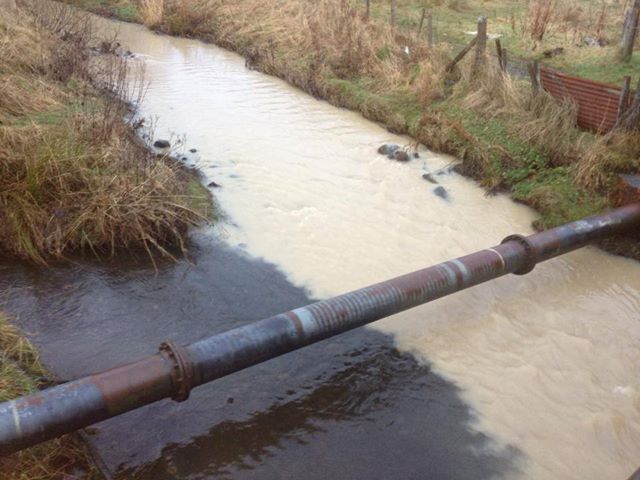 A serious pollution incident on the Cummock Burn near Dalmellington. Photo by D. McClure.

On Friday morning, I finished off a couple of pressing things in the office and called SEPA (who were already attending to this incident) before heading out to Dalmellington in search of the pollution source but as yet haven’t managed to pinpoint the problem. Water levels remained quite high so it was impossible to see any silt on the stream bed but I’m sure it’s still there and may look again on Monday depending on weather but the weekend’s weather forecast is horrific so I expect the burn will be in spate at the start of the week. 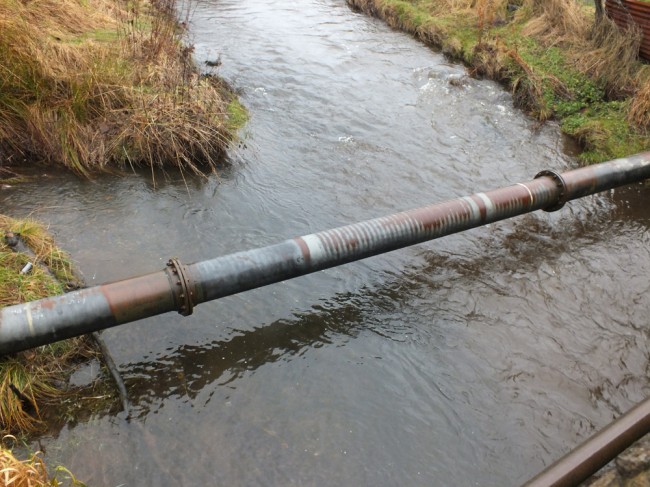 The Cummock Burn on Friday morning. Not clear but much improved on yesterday’s situation.

Pollution is always a major concern but at this time of the year when salmon and trout are spawning, it is especially worrying. I haven’t hear of any dead fish as a result of this incident, but that doesn’t mean that there weren’t any. Of course, the impact of what appears to be a heavy siltation problems, could have disastrous consequences for eggs already buried within the gravel and for fish inhabiting the river. We won’t know the full impact of this unless we electro-fish the burn next year and even them quantifying a problem won’t be straight forward. We are aware of previous problems on this and the Burnton Burn (enters the Cummok burn on the left of the photos above) and fish populations have declined in recent years. This entire burn should be a prime spawning location as the substrates are ideal for both trout and salmon in most areas. Previous incidents were linked to both working and historic opencast sites and there may have been other sources too.
As Scottish Coal who operated the Pennyvennie Coal site are now in liquidation, I suspected that the pollution may have arisen from there due to a lack of maintenance, but I couldn’t pinpoint it to that site.  That may suggest that there was another source or that I just couldn’t see any irrefutable evidence due to high flows and the colour of the burn when I visited. It was obvious that there was still something adding colour to the water and I traced this upstream to Ashbeugh Glen where a small burn enters the Cummock. A roadside ditch was heavily silted and this was down to the Iberdrola site where the New Cumnock electricity sub station is being constructed 3 miles from Dalmellington. At the entrance to the site, ineffective silt traps were in place but after speaking to the site managers, they have agreed to boost this protection. They were aware that there had been a pollution incident on the Cummock yesterday but were adamant it didn’t arise from their site. After thanking the managers for their concern and assistance I left them to rectify their problems and see what SEPA had to say on yesterday’s incident. There may be other explanations too, such as a landslide or another input from agriculture but I didn’t see anything that seemed likely to have caused the level of pollution that was present on Thursday. 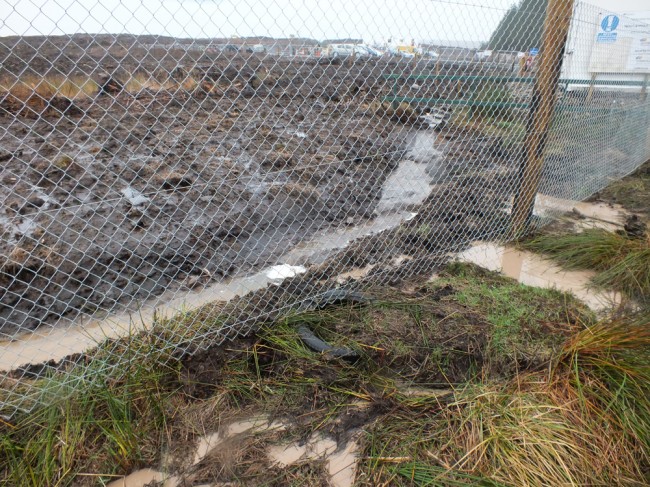 Surface water at the new substation site 3 miles from Dalmellington 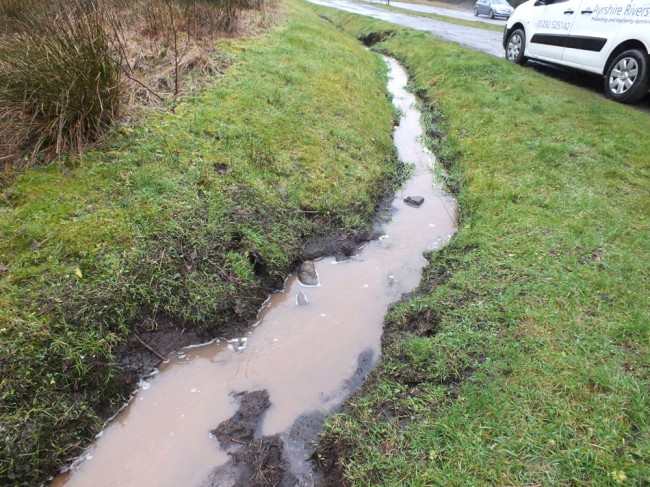 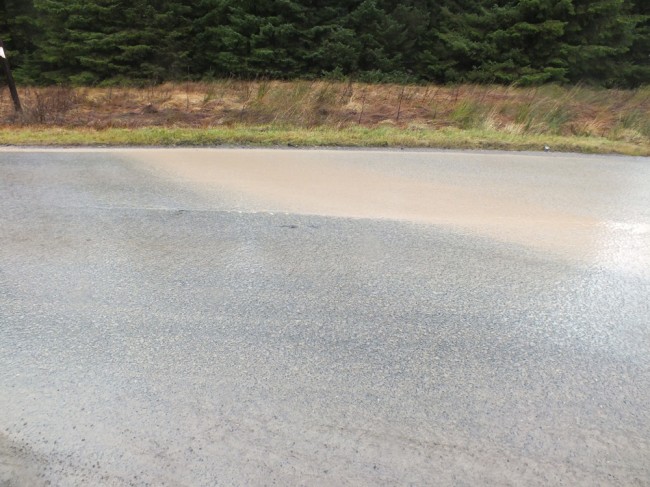 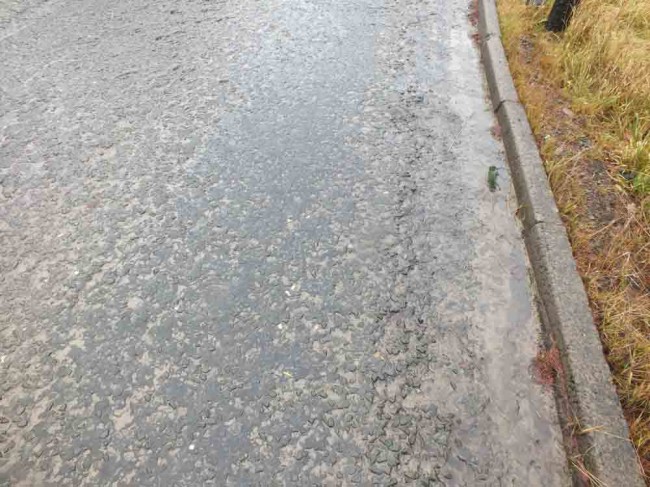 The surface of the road some distance from the site entrance would suggest that the silt may be mobilised over some distance. This is a recognised contributory factor of diffuse pollution and I’d like to see it addressed.

Unfortunately I haven’t been able to get an update yet as the officer that had attended was out of the office when i called so will await an update on Monday. I did inform SEPA of my concerns over the incident and made them aware of the problem at the Iberdrola site and the action I had recommended. Both SEPA and ART remain concerned that the heavy rain forecast could lead to a repeat incident so anyone in the Doon catchment should keep your eyes out and if you see anything, please contact SEPA immediately.  SEPA’s Ayr office number is 01292 294000 and out of office hours, calls are automatically transferred to their call centre. If you have my mobile number, don’t be afraid to contact me either.

I spoke with SEPA’s representative this morning regarding this incident and they too had been unable to pinpoint the source of the pollution, but were fairly certain that it hadn’t stemmed from the Opencast site. Having been made aware of our concerns over the Iberdrola site, they agreed that they would keep an eye on this as in their opinion it seemed the most likely source of siltation in this area.