I dropped in on Catrine at lunchtime today to see what progress has been made but there was no one on site. The form work was off the smolt trap but I didn’t venture near as it was partially covered and I’d rather wait until it’s exposed for a proper look. I am concerned over the size of pipework between the boxes but we haven’t been shown the drawings so I won’t know until I get a look inside.

The hole in the fish pass now has a pipe sticking through it that should help prevent water eroding the back of the wall but beyond that there doesn’t appear to be much progress. Perhaps water levels were too high to continue work but the river is dropping back so things should be able to progress soon. The pipe is to carry water from the top baffle in the fish pass where the plan is to spill water from the ladder and then return it to the lower chamber. My concern remains about turbulence and entrained air and also screening but as I haven’t been shown the drawing detailing the  design, I can’t really comment further. We did request full details but this hasn’t been forthcoming. This is now a ‘suck it and see’ situation, but if it’s not right,  it will need further attention. I was a bit surprised that the hole had been cut last week especially considering the poor forecast but I’m not the project manager so I have no control over the timing or order of the works but I will watch with interest.  Lets just hope the weather improves as this will make the job easier. 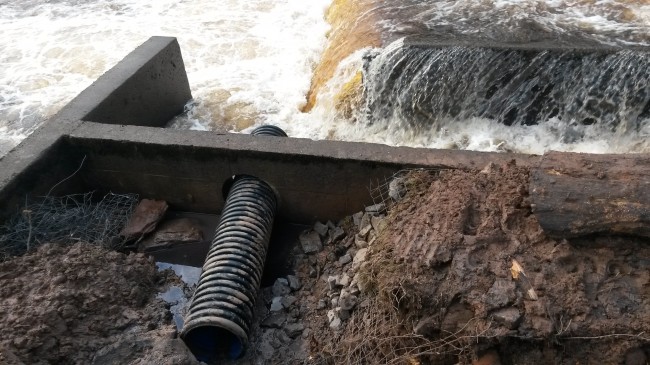 The pipe that now blocks the hole in the wall of the fish pass.There’s a fair bit of very dirty water in there I’m not certain if it coming from the ground or the work. I’m unclear how this pipe will be finished as we have yet to see the detail in a drawing. 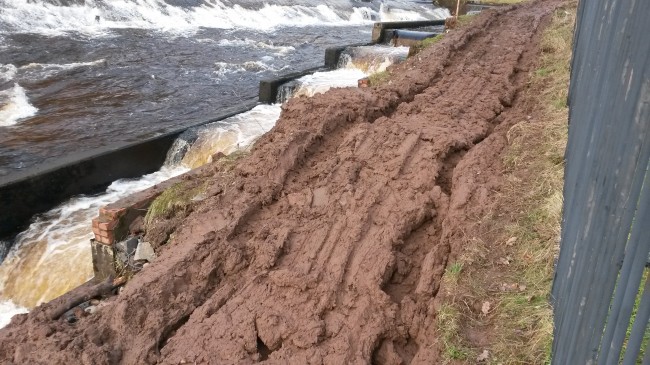 The main problem when working with machinery on wet ground is that everything turns instantly to muck.

Upstream of the dam, the new landslide that I reported on at the weekend has moved considerably. A great deal more soil has moved pushing trees into the middle of the river.  The flow is certainly deflecting off the far bank and this will increase as sediment deposition builds up around the debris. The River Ayr Way is certainly under threat on the opposite bank and erosion is well under way. 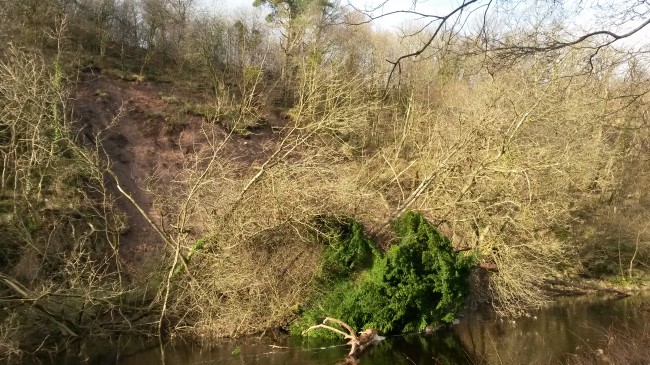 Compare this with the image I took last weekend. The conifer is now in the middle of the river and tonnes of soil have slipped down the banking. If this isn’t cleared quickly, I fear a great deal of sediment will fill this holding area of the pool. 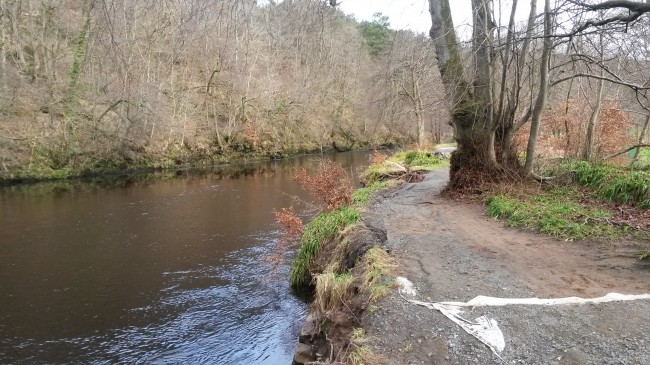 The River Ayr Way is being undermined as a result of the landslides on the far bank. This bank in now undercut and a mature tree has been lost recently as evident by the hole in the middle distance.

Coincidentally, I met a man at Catrine this morning who had discussed the landslide situation with me last year after the first major slide. We were both agreed then and now that something ought to be done to prevent further movement or else this situation will only continue to deteriorate with implications for CCT managing the trash and smolt screens at the entrance to the lade. It may also lead to the fish pass blocking more frequently which would concern not only us but the DSFB, bailiffs, and anglers along the length of the river however, modifications are planned for the intake later this year so that should help.. This has to be addressed and I’ll raise the issue again with CCT. It’s a major issue and not one that I see easily solved. 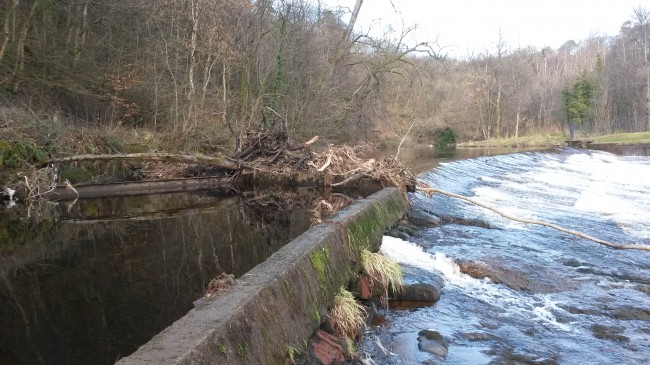 The trash screens at the entrance to the lade are now choked with roots and branches. This will require constant maintenance once the hydro becomes operational or else the flow to the turbine will be significantly reduced.