One concern we had at Catrine was the lack of plans to rescue fish from the depleted work area. The requirement for this became obvious to most very quickly and this morning I approached the Contractors and Catrine Community Trust on the matter. After brief discussions, Covanburn’s site agent agreed to allow us to rescue the fish as they too had concern for the fish population. 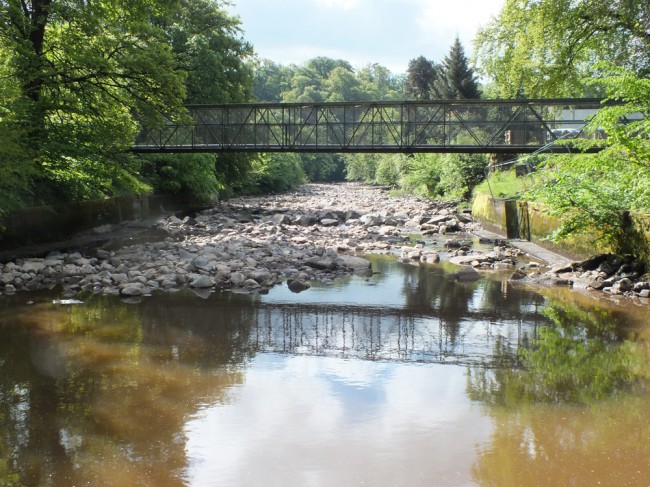 Virtually no flow going down the river below the dam. The contractors will work quickly to restore flow as soon as possible once they complete the current schedule of work to Anderson’s and the piling at the top of the weir

We quickly gathered together the team and all necessary equipment and were back on site ready to work in just over an hour; the benefits of having a specialist local Rivers Trust I would add. The site agent assisted by pumping as much water as possible. We split the pool into two with  a stop net and fished the lower half first. By lunchtime we had rescued over 250 fish from this part of the pool, with about 100 trout and salmon and 20+ eels in the catch. Lamprey were also captured but only about 10 or so in total. Most of the salmonid catch was trout making up approximately 90% of these fish. The largest captured would have weighed about 1.25lbs and was a really nice spotty and totally wild fish. We scaled sampled the larger fish. 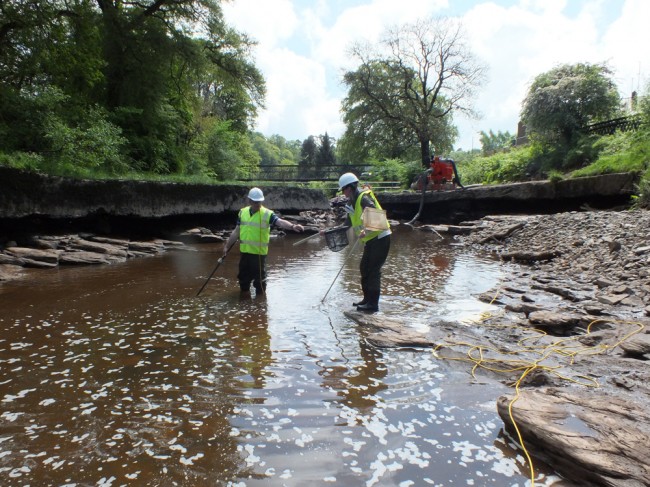 Electro-fishing the middle pool to remove as many trout, salmon eels and lamprey to safety

After a quick lunch we returned to fish the upper section of the pool. By this time the water level was rising as the pump had packed. We caught another 66 or so trout from this area and some very large eels. There had been talk a salmon trapped in the pool but these reports proved unfounded. I expect it had moved up through the fish pass last night or dropped back into Anderson’s as fish have been seen there today. Covanburn asked us to return tomorrow and try to remove these fish to safety which we are pleased to do. I am delighted at the positive attitude that the contractor is showing towards protecting the fish and ecology. We have established a good working relationship with them and this will make both our jobs easier and more effective. 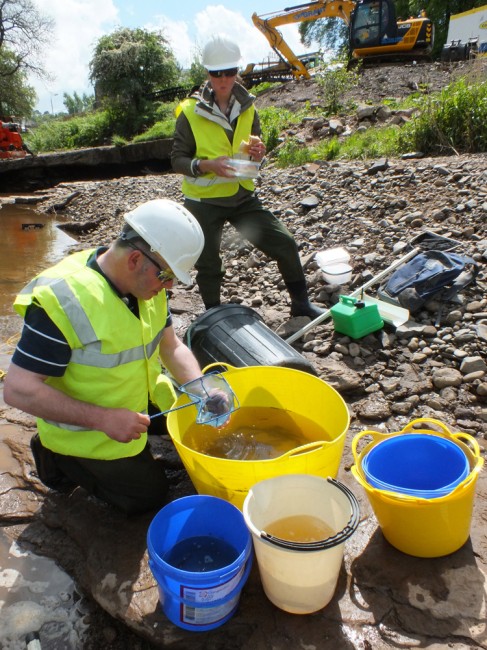 Processing the catch as Gillian grabbed a bite to eat

After sampling the catch we returned them to the river a short distance upstream of the dam. In all we had about 5 casualties that didn’t survive the ordeal but with so many fish to deal with in warm conditions, this was a good result. I was pleased to note that there were no smolts in the catch so presumably they have all gone to sea by now. 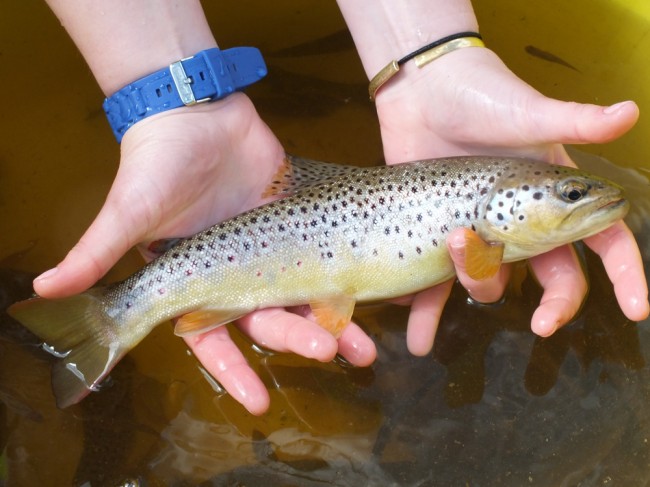 Just one of about 6 or 7 really nice trout caught in the middle pool. With so many trout in the catch in just one pool, it confirms what I keep saying to anglers and clubs…. ‘There’s no shortage of wild trout in the River Ayr, why stock at all?’ 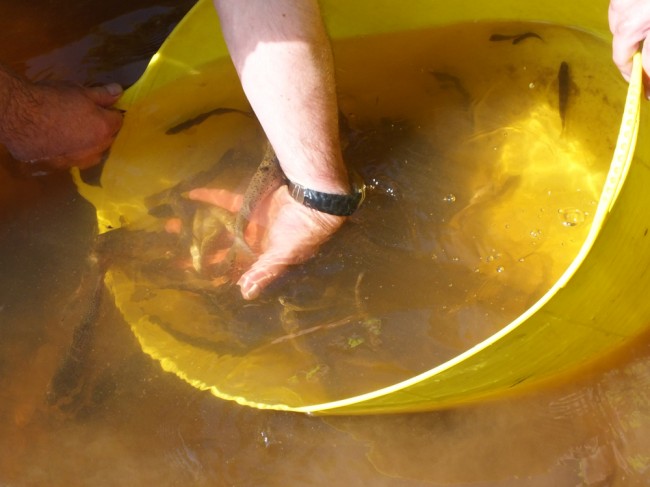 Once we completed our sampling, we quickly returned the catch to the river upstream.

Tomorrow will be an interesting day as it has been about 70 years since Andersons was last pumped almost dry. Watch this space for an update.

In anticipation of catching an adult salmon today we prepared a few tags to insert into any fish captured. We will use them tomorrow I’m sure. Anyone catching a tagged fish later this year, please report it to the Trust, your Club or the DSFB immediately and take a photo if possible. This will allow us to see where these Springers head to within the catchment. I will put up a prize for any angler who reports such a tagged fish to us along with a photo. If it is returned alive, I will make sure it is a better prize than if it is killed but really it would be great just to get the information on it’s whereabouts.