I didn’t manage to visit the dam towards the end of last week due to other commitments and as I didn’t receive a phone call from the contractors I presumed nothing too much had changed due to high water levels preventing them from undertaking the  temporary sub-surface pipe installation that will allow the work at Anderson’s to be completed.

Gordon and I dropped in on Sunday afternoon as we expected to see a fish or two moving in Anderson’s pool after the run of water last week. We are hearing of a few fish being reported moving in the middle reaches of the river so it seems likely that some may have pushed upstream into the river above Catrine….. That was until we arrived at the Dam. Virtually all the flow was diverted through the voes and the fish pass was receiving but a trickle.  The piling above the dam had been extended to include the fish pass and an pipe installed to allow fish to pass through to the pool however this doesn’t appear to be satisfactory for several reasons but not least because virtually no flow was going through the pipe as the main river flow was diverted through the voes. The fish pass requires a flow of more than 0.5 cubic meters per second in the upper chamber to function properly (probably in the order of >1.5 cumecs). The greater volume entering the fish pass allows adequate depth of water to back up from where it will be reduced to 0.5 cumecs (excess water above 0.5 cumecs bypassing via the new spillway) . My estimate of the flow this afternoon was there was no more than 0.25 cumecs  in the fish pass. This isn’t the only problem I see at the site at the moment. Currently, fish will struggle to reach the pass due to the situation at Anderson’s described below. 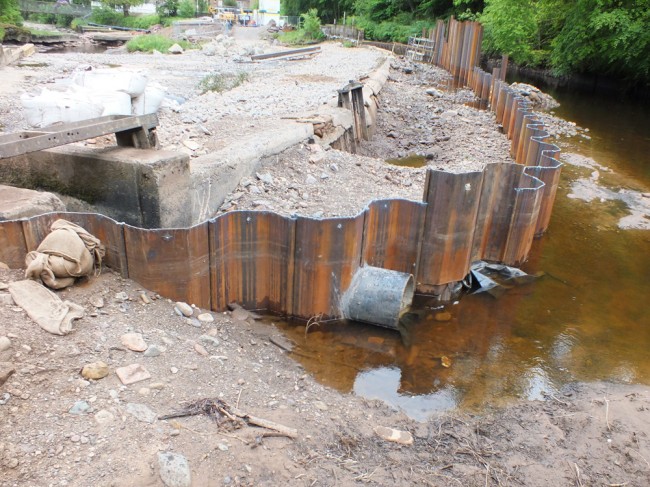 The upper end of the fish pass as modified sometime last week. I’m unclear why it was necessary at this time to include the fish pass within the coffer dam. I will ask! 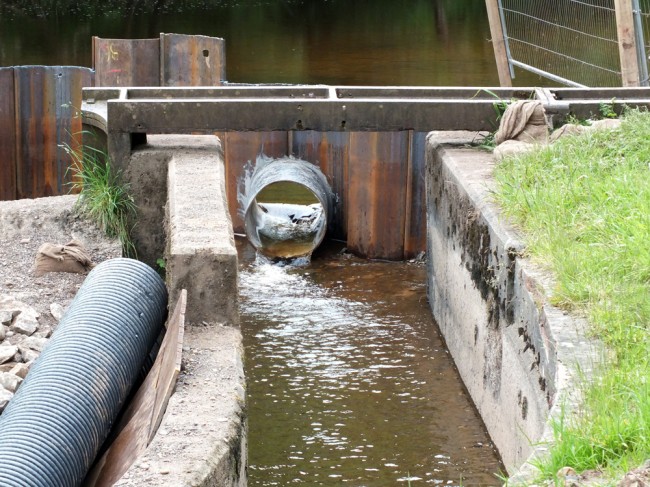 Looking up the fish pass to the entrance. This doesn’t work at this flow for several reasons. I’m not sure it will work at higher flows either. We need to know if this is a only short term temporary measure to allow Anderson’s work to progress this week.

Anderson’s was unchanged since I last discussed it with the contractors on Tuesday. High water last week has prevented them installing a sub-surface by-pass pipe to allow fish to move upstream. Currently their only way upstream is a leap into an elevated  pipe (perched) and that seems very unlikely. 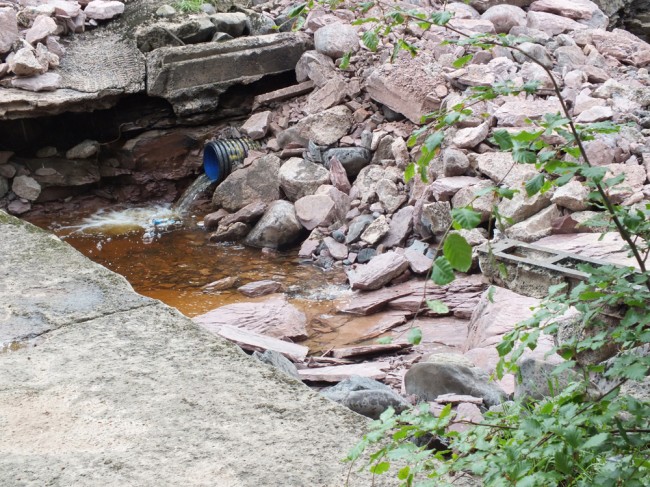 Currently the only route upstream for migrating fish (an unlikely option). This has been the prevailing situation since our fish rescues a week and a half ago. As soon as the planned sub surface pipe is installed, fish passage should be restored.

This was due to be replaced by the sub-surface pipe and the concrete works at Anderson’s would then go ahead. I expect this will be on their agenda for work later this morning. If not, then I expect that they should have a plan to adequately restore fish passage from Anderson’s until such time the work can be completed. Here’s a link to a short video clip of the situation we found today with virtually all the flow diverted through the voes. https://www.youtube.com/watch?v=DNLkaxR7iyw

Of course, with the low volume of water flowing from Anderson’s to the tailrace some 800m downstream, migrating salmon are unlikely to be able to complete their journey and we will be monitoring the numbers of fish in the pools up and downstream of the tailrace tomorrow if possible. With the whole of the fragile Spring stock now in the river, it is essential that these fish are able to move to their desired locations wherever that may be within the river. Last week the contractor informed me that they have modified their method to construct the extension to the upper end of the fish pass to reduce shut down times to the fish pass from 2 weeks to just 2 days. Instead of constructing this extension in situ, it will now be precast and craned into place and we welcome this. I am rather surprised that precast hadn’t been the first option but regardless, I do believe the contractor intends to keep disruption to a minimum.

Whilst we accept that some disruption to fish passage during the works is inevitable, this should only be when absolutely necessary to allow essential works to take place and must be carefully planned for in advance. When salmon are running the river, it is inconceivable that their access to the upper reaches be barred for days on end as has happened almost continually since the 20th May (2 weeks). Obviously rain delayed planned progress but this is one of the difficulties of working in stream and it can never be predicted with certainty so therefore plans shouldn’t totally rely on low flows.

I will be visiting the site this morning to discuss the situation with the contractor and hear the schedule of planned works for the week ahead. I will also raise my concerns with those involved to ascertain the projected timescales before free passage can be restored and when the extension will be installed. I will again be requesting a copy of the method statement from CCT, to allow ART and the DSFB to comment on matters affecting fish passage. SEPA has of course been consulted. Had we seen a copy of this document in advance of works starting, we wouldn’t now be working blind and could have offered comment and advice to those involved in the design and delivery of these works. We do understand that the timescales between agreeing contracts and commencement of works was limited, however as we enter the fourth week of a 24 week contract, we do expect that some developed plan for the works should be made available for comment by the DSFB and ART (advisers to the DSFB) asap.  We may even be able to offer some beneficial advice that SEPA hasn’t thought of but if not at least we will be able to let owners and anglers the length of the river know what to expect and when.