We have been busy controlling Giant Hogweed along Ayrshire’s Rivers and in a few outlying areas which pose a threat to the control strategy. We have received a good few phone calls from concerned anglers and members of the public alerting us to the presence of the plant so please be assured that we are on our way.

Contractors have been out in force and have now completed works on the Water of Coyle and the Annick Water. They are currently working on the River Ayr  and River Irvine with the Garnock and coastal burns to follow very soon. I have also been out spraying in selected locations with help from some of our volunteers.

As this is the final year of the CIRB project we left it a little later before we started control, last year there seemed to be a second germination of seeds after control was completed in late May/early June and we had to go over the catchments a second time. With the mild winter we had and the recent weather conditions, the plant has flourished in many areas and there are many plants at the flowering stage already, please do not be alarmed as we can still spray the plant even at this stage. 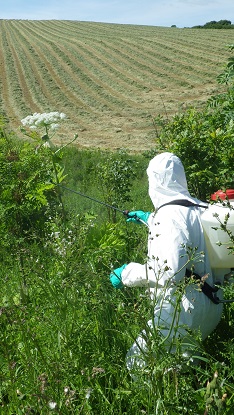 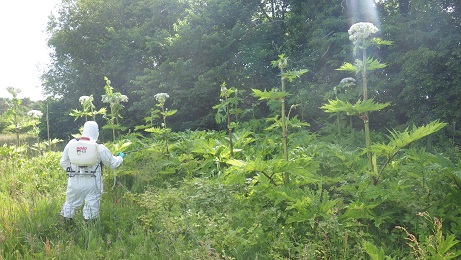 We would still like people to let us know if they spot any plants as we may not know the location of every single infestation. Plants can also be missed while spraying river banks although our contractors will walk each river once they are finished spraying. You can contact us on 01292 737300 or email gordon@ayrshireriverstrust.org

Following on from Giant Hogweed control we will concentrate on Himalayan Balsam using mostly volunteers, if you would like to get involved please get in touch.