After a few days off, I visited Catrine Dam yesterday morning expecting to see Anderson’s work complete as I was under the impression that the contractor had planned to work last weekend to ensure they made the most of the dry weather. They did, but not on Anderson’s instead piling behind the upper dam. I hope this won’t turn out to be a mistake because in my book, you make hay when the sun shines as that can be a rare occasion! 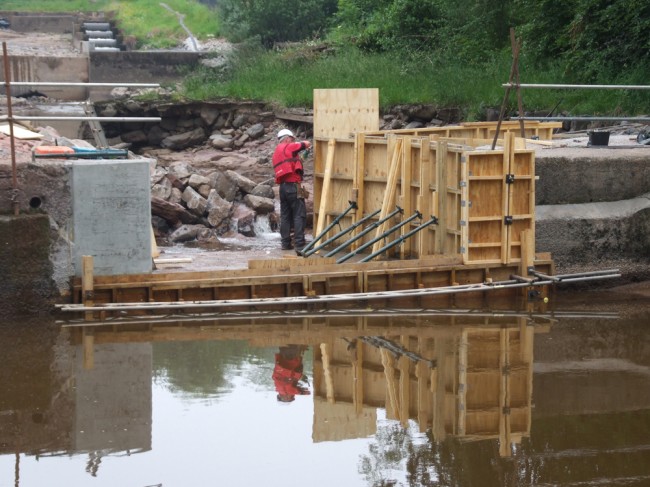 Joiners erecting shuttering on the left hand side of Anderson’s 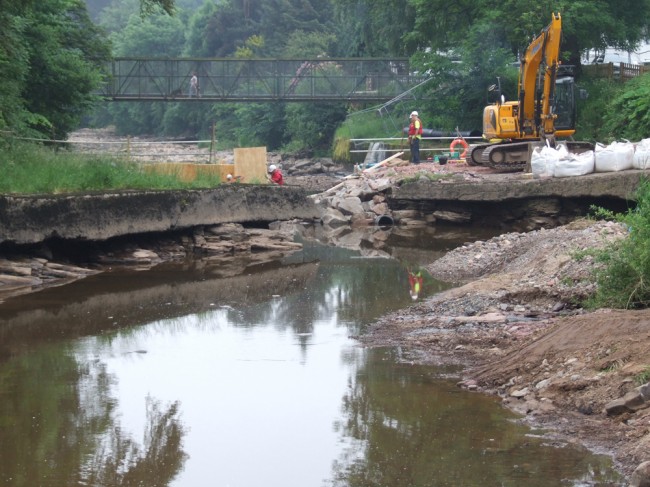 There is no provision within the contract to address the undermined concrete at the neck leading into Anderson’s. I will raise several concerns I have about this at next weeks meeting.

Anyway, joiners were busy shuttering the left side of Anderson’s and they planned to pour concrete later on Tuesday. I left them to it after discussing the current programme of works and timescales with the site agent. A meeting is arranged for next Monday to discuss the final works required at Anderson’s below the current water levels. This will mean a further drop in levels and a fish rescue has been agreed on the morning of the works. At least this time we can be well organised. There was a salmon swimming around the pool yesterday morning and the contractor agreed to freshen the water when I was there and quickly arranged for more flow to be sent through the fish pass. 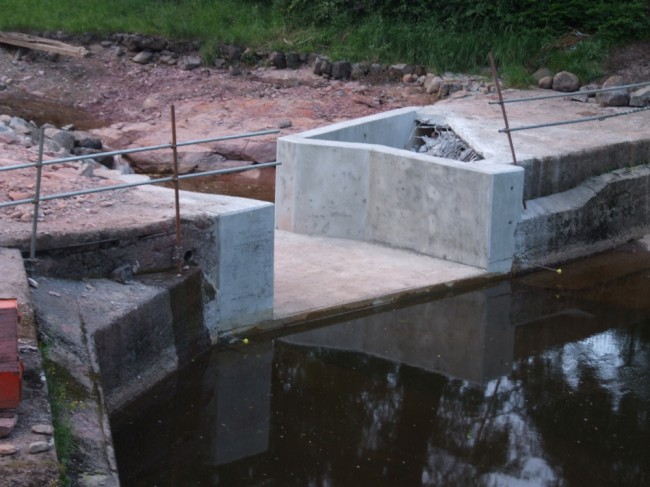 The concrete has set and shutters have been removed at Anderson’s this evening. The void will be filled with rubble and concrete making a solid mass.

I revisited this evening and sure enough the walls and base at Anderson’s are complete. That just leaves the lip at the face of this weir to be poured and the work below the water line to be done next week. This evening there has been an attempt to poach salmon in the fish pass and bailiffs interrupted a group of youths that had blocked the ladder with boards taken from the site. Contractors left at 5.00pm and the bailiffs arrived at 7.00pm. At some point during the two hours in between, the pass was blocked. Bailiffs saw a fish in one of the chambers and will attempt to move it to safety later this evening. I presume this fish had been stuck in Anderson’s and decided to move upstream when flow was restored at the end of the day’s work. I attended around 9.30pm and the pass was running unhindered and there was no sign of anyone near the fish pass or site so perhaps they have been adequately deterred.