Following the survey of the Girvan on Friday and the very poor results we recoded in the lower river as a result of the fish mortality incident that occurred in July, we headed to the Stinchar this morning to see how it fared as it too had suffered from a similar incident at the same time.

Starting in the upper river we worked downstream. In contrast to the Girvan, we didn’t find a decline of any consequence in the upper reaches (on both rivers, the upper reaches were unaffected by the fish kills). The first site at the gravel extraction point returned 98% of last years fry total with 187 fry caught in 5 minutes. Consistently good! 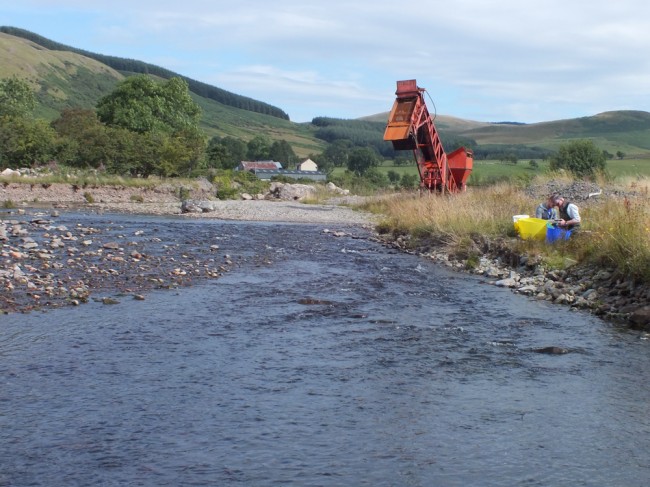 Great fry habitat vacated by a heron as we arrived. Numbers appear to remain consistent and good at this site. 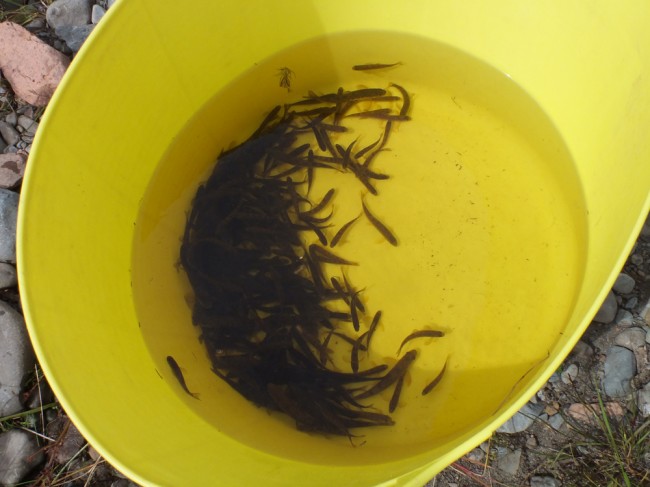 A mass of fry in the bottom of the bucket. A great way to start the day.

Further downstream at Auchensoul, 157 fry were caught which is 128% of last years total. This is the best result ever recorded at this site since monitoring began in 2003 and very encouraging. Pinclanty Mill is the next site downstream and although numbers were reduced by 37% on last years figures, this still represents the second best fry numbers ever recorded at this site. The upper river was clearly performing well and I have no concerns about these results whatsoever. 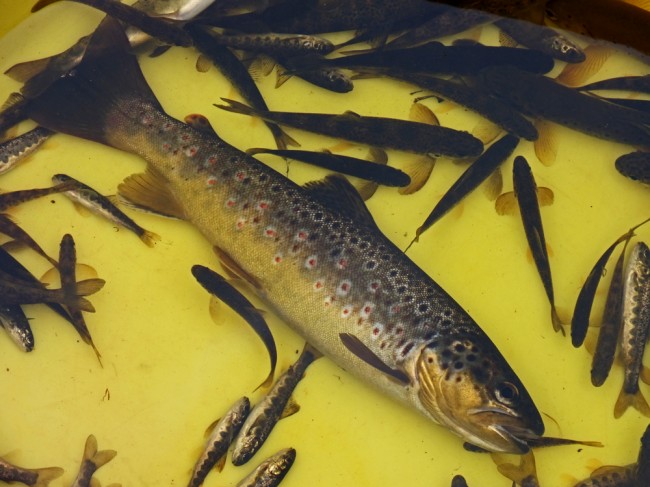 The best brown trout of the day (still recovering from the anaesthetic. One of just a handful we encountered.

Laggensarroch is a difficult site to fish and in my opinion, not really a very good fry site. The habitat is more suitable for parr and our results today confirmed this. The fry numbers were down by 60% on last year but again the results was more in line with numbers found between 2007 and 2011 and don’t really raise too many concerns. The parr numbers were very good with 71 parr being caught, up an incredible 591% on the previous best results for parr at this site. Last years good fry numbers obviously contribute to this. 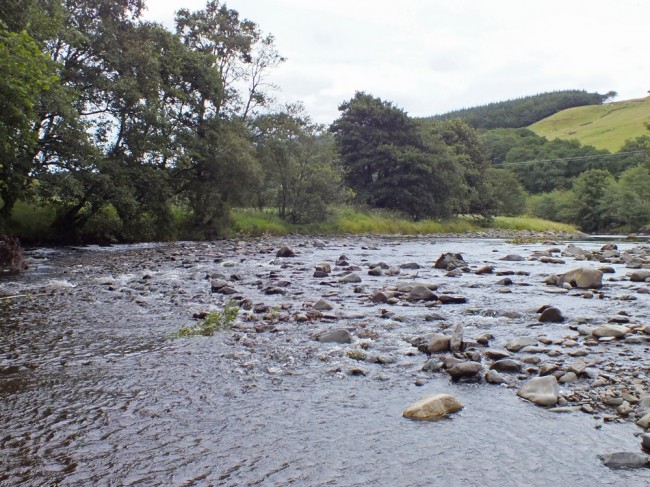 Laggansarroch where parr numbers were up a staggering 591%

Hallowchapel just below the Duisk confluence was the next stop and is normally a consistent site if unspectacular and this year was no exception with fry numbers being the 3rd best result since 2003. Numbers were down on last season by 55% but we still caught 117 fry in 5 minutes which has only previously been bettered in 2006 and 2012. At Craig House just downstream, again the results were considerably down on last year but better than any other year since the site was established in 2007. 86 fry were caught and this was just above the 8 year average of 81 fry (had last year not been such a bumper year, 2014 results would have looked very encouraging. One exceptional year can skew short term data sets). 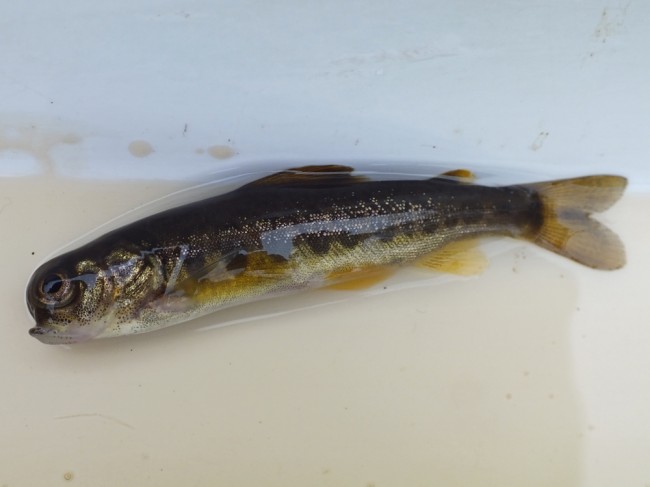 This wee fry has a deformed top jaw.

This is where the rosy picture ends and the Colmonell site at Kirkhill was predictably very poor. It was in this area that the first reports of dead fish first materialised and when I attended in July, there were hundreds of dead parr obvious. Fry are harder to spot and we didn’t see many dead at that time but results today indicate that there has been a large loss from the lower river. We recorded 6.8 fry per minute which is the worst result since monitoring began here in 2008. Compared to last years figures, this represents a decline of 86.6%. The 7 year average is 20 fry per minute, so with only 6 per minute today, it is a disappointing result whatever way we look at it.

I was keen to establish a new timed site in the lower river as I’m not that happy with the Ballantrae site. It is at the upper tidal limit and we often see flounder and mullet in this area. I’m not really sure what we  can draw from results at this site so I looked for somewhere better. We will continue to fish this site for a year or two until we have built up data from the new site but unfortunately we ran out of time this evening. We did find and fish a new site just upstream of the Tig confluence at the top of the Balnowlart stretch. The habitat is varied with a good mix of substrate suitable for parr and fry. It is run and riffle and consistent with most other sites on the river so once connected we set about fishing it. Of course we have no prior data to compare the results to, but with only 4.0 fry per minute being caught, I suspect this area too has been impacted by the incident in July. Parr were slightly better with a total of 27 coming to our net. 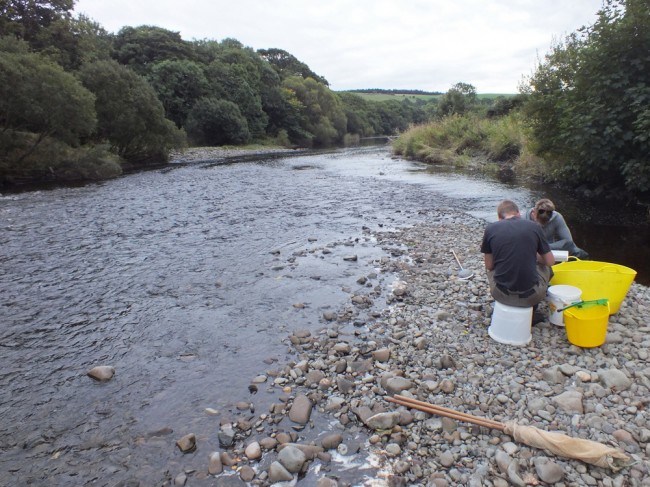 All in all, the results were fairly encouraging with the exception of those from the lower river. There were obviously plenty of fish on the redds despite 2013 being a poor fishing season. The losses from the lower river we not unexpected but really, there is nothing that can be done to mitigate this. Time will soon rectify these low numbers. The parr that survived will hopefully go on to smolt and manage to return in decent numbers. We keep saying that the biggest problems our salmon face are at sea but of course events such as occurred earlier this summer are a problem and we have to hope they won’t be repeated.

Although the Fish Health Inspectorate couldn’t identify any particular cause for these mortalities and SEPA ruled out pollution, I still suspect an input somewhere triggered them. Please keep your eyes peeled for pollution sources or anything which just doesn’t appear right, and let us know immediately. Don’t forget to call SEPA too if you have concerns.