As regular readers will be aware, there was a fairly significant fish mortality episode on the lower Girvan just a few weeks ago towards the end of the very hot spell of weather. It wasn’t just the Girvan that was affected, the Stinchar at the same time suffered losses in the lower reaches. Following a fairly intensive investigation, results from the lab failed to find anything conclusive but the opinion was that environmental factors were largely responsible. There were subtle differences between the two episodes. The Girvan appeared to suffer more adult trout mortality than fry or parr or salmon for that matter while the Stinchar appeared to lose more salmon parr than anything else. All very strange.

Timed electrofish is late this year due to equipment failure however I would have held off in any case following these incidents to allow survivors to recover fully. Results from the Ayr and Doon have shown that on the whole, there are less juveniles in these rivers than last year. That doesn’t mean it’s all bad as 2012/13 was a very good spawning year but 2013/14 doesn’t appear to have been as good, possibly as a result of prolonged high water over winter and perhaps less spawning fish in the rivers as indicated by poor catch returns from 2013. 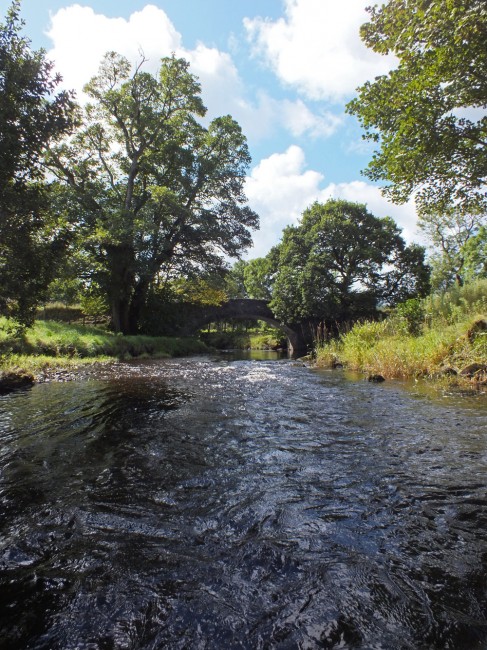 Craigfad Bridge at Balbeg on the upper river. Fry numbers were respectable at this site although well down on 2013 numbers.

This morning we started the timed survey on the Girvan at Tairlaw in the upper river. Gordon and Fraser were with me and were both impressed by the early results. Looking back at results from last year however, the numbers were down by 58.7% of those found in 2013.  Craigfad Bridge site produced a similar result, down by 56%. Although this appears to be a huge reduction, it is important to remember that there were still good numbers of fry with 93 being found at each of these sites. These numbers aren’t too bad at these sites. Had we undertaken this survey a month ago, I’m sure numbers would have been marginally better, but of course that is just conjecture. Fry do suffer massive declines during their first year. As we have found elsewhere in Ayrshire (and I also hear from further afield), results are generally well down this year.

As we progressed downstream, we found the reductions reduced slightly in the middle river. The best result came from the Merkland site as it did in 2013 but at only 43.8% of  the previous total this actually meant we caught 181 fry in 5 minutes (compared to 322 in 2013). I expect that this once again, this site may produce the best result we find anywhere in Ayrshire this year, but time will tell. 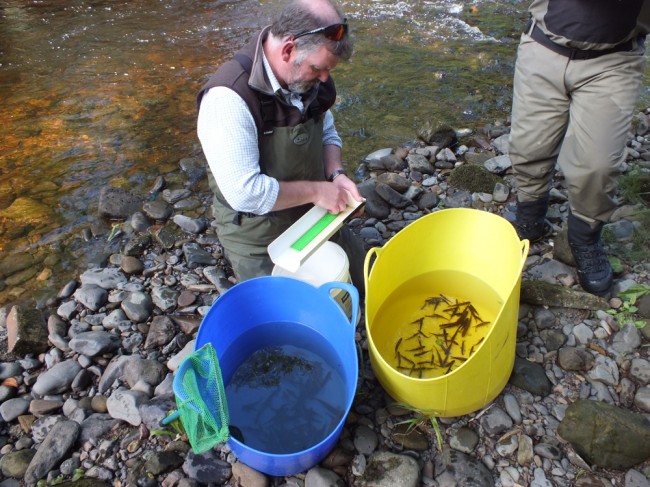 Good numbers of fry were caught at Merkland once again. This site was the most productive site found anywhere in Ayrshire last year. It may once again prove to be number 1.

Bearing in mind the fish kill in July, we approached Dailly unsure of what to expect. The incident appeared to have affected fish downstream of Dailly but no source of pollution could be pinpointed and in fact nothing toxic, infectious, viral or bacterial could be identified as a cause. Our site in Dailly village produced a reasonably good result with 21.8 fry per minute being caught.  This was down on last year and by a slightly higher percentage than anywhere else so far but at 61.1% reduction, it didn’t seem significantly worse. There were large numbers of stone loach at the site. 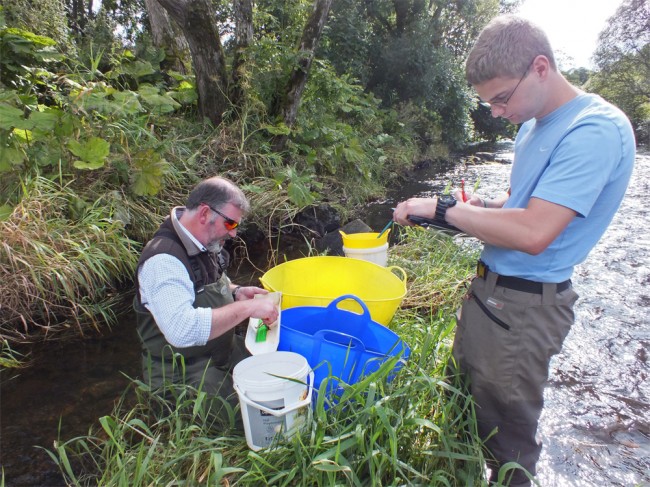 Fraser recording the catch at Dailly. We appreciate the help that volunteers contribute so freely. Hopefully they benefit as much as we do. I’m sure Fraser is enjoying the experience despite falling in today!

The next site downstream was at Cairnhill Bridge where we saw many dead fish during July although few parr or fry were  obvious. We caught 27 fry in the  survey which was down on 2013 by 82.6%. This was a large decline and 21.5% greater than anywhere else on the river so far. We continued to Enoch where even higher numbers of fish had been found dead or dying in July. After 5 minutes we managed to catch just a single salmon parr and 1 trout fry (100% reduction for salmon fry). This was a disaster as this run normally produces many more salmon than this. 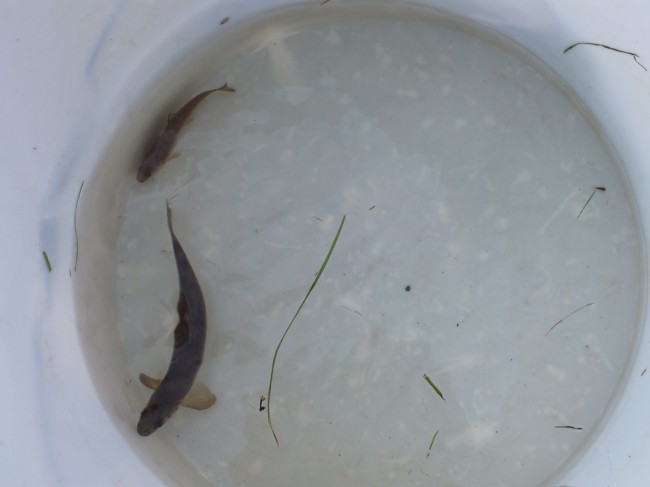 Desperately disappoint results at Enoch where we found no salmon fry at all.

Finally we completed the timed survey at Girvan Dykes. Again this site exhibited a massive decline (93.1%) with only 6 fry netted in total. 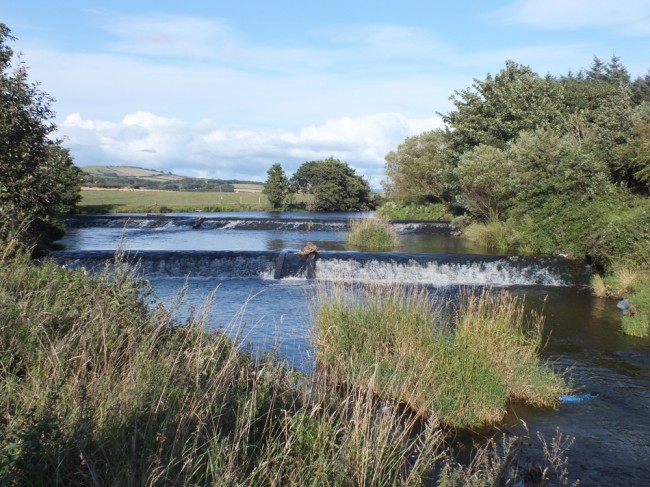 The Girvan Dykes where we finished the day with 6 fry. This was a poor result but not as bad as at Enoch just a short distance upstream. Perhaps the Dykes may have increased oxygen levels slightly during July thus reducing mortality for a distance downstream.

I had previously estimated the losses in the lower river in the low thousands of fish based on what I had seen at the time. I would now revise this upwards considerably based on today’s results. We have yet to properly analyse these results but I am certain that we can see a significant difference between sites upstream of Dailly and those downstream. We will report more details as they become clear.

We heard calls for the hatchery to be rekindled following this incident and these results but it is essential to consider carefully what the implications of this action could mean. By stripping fish and rearing eggs, a hatchery can’t increase the number of eggs produced within a catchment. All that is achieved is the removal of natural selection, quite probably to the detriment of the naturally produced fish. Fish that are weaker may be kept alive by artificially boosting their viability. These fish may then be reintroduced to compete with the natural stock and may have an unfair advantage. Essentially, the same amount of eggs are produced regardless of whether a hatchery is operational or not. The risk to truly wild fish is increased. Another point worth remembering is that had any fry been produced in the hatchery last winter, they would have been stocked into the river in advance of the incident and therefore would have been just as susceptible as the wild fish. There are many aspects to this but I’d urge caution before calling for the hatchery to be restarted. Results elsewhere in the catchment show that the river is producing adequate numbers of salmon fry and compared to other Ayrshire rivers, the Girvan is consistently performing well.

We will be at the Stinchar on Monday and again examining the results closely to assess the full impact of the July incident.

Once all timed results are completed from all rivers, we will analyse results more fully and compare how each river is performing.