Well rain came eventually and all rivers have risen into spate. Lets hope the fish come in quickly and fishing next week is good.
I went to Catrine today to see how the completed dam looked in spate. It isn’t the biggest spate in the world and we could normally expect salmon to be running at the height of water that was there at noon when I visited but they haven’t arrived yet. I will check the flow height at noon (when I visited) later today on SEPA’s hydrograph once it’s updated. 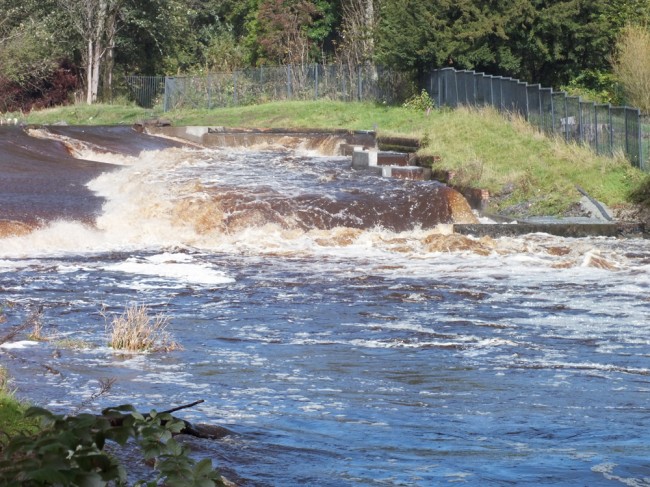 Given my concerns over the entrance to the fish pass, I was keen to see how the modifications to the side wall had improved things, if at all. CCT and SEPA had opted to wait before making further adjustments (if necessary) until the dam work had been completed and the flow over the dam and through the pass could be assessed. ART and the Board remained concerned that fish would find the entrance to the ladder difficult during spates conditions. During the last spate in August,  fish appeared to struggle to enter the pass when flows exceeded around 0.5m on the SEPA hydrograph.  This is the first opportunity to see how it’s performing since completion. I have to say that predictably, the flow over the dam crest is concentrated to the side of the fish pass (due to the shape of the dam) and the smooth finish of the completed surface only serves to increase the velocity of water. Having looked at the finished result today, I remain concerned/convinced that fish will not find the entrance to the ladder at this height of flow and it will need careful monitoring over this weekend to determine exactly when the fish pass becomes useable. The side wall that was increased in height continues to overtop, increasing the volume of water flowing through the ladder above the designed flow capacity in the lower chambers. 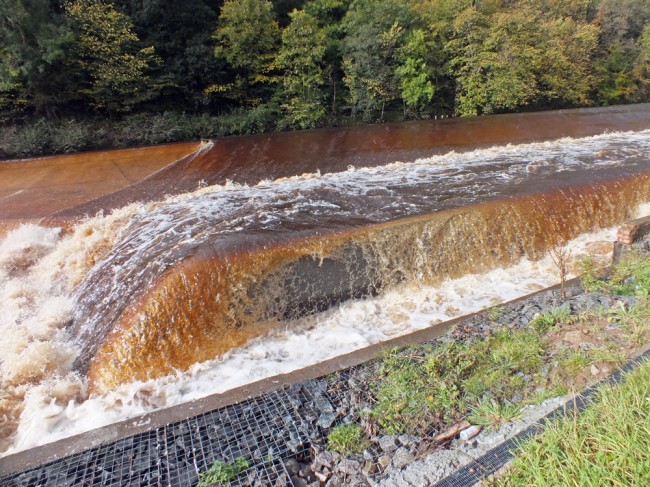 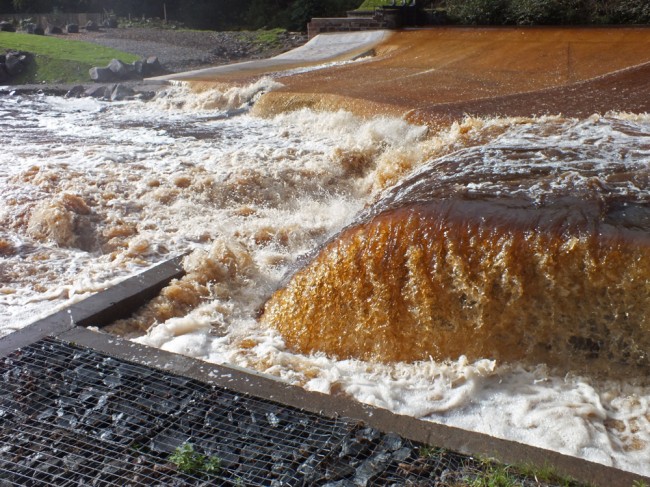 The concentrated flow over the dam almost obliterates the entrance to the fish pass at this flow. Fish will struggle to enter the fish pass at this height of flow, or may find it impossible due to the velocities and turbulence and lack of definition. Unless the entrance is obvious, then I expect we will continue to see salmon repeatedly attempting to run the dam back and failing

There was a branch in the fish pass partially blocking it, but it still appeared to have adequate flow for fish. A simple trash barrier at the upper end of the pass could prevent most of this type of material entering the pass. It would help if there were fish there to see how they behaved and where they attempted to run but they will come in the next few hours, I’m sure.

I intend to monitor this over the weekend as time allows to see how it performs as water levels change.

I revisited the dam just before the light faded this evening and the water levels were dropping back but the entrance to the fish pass was still inaccessible in my opinion. I downloaded SEPA’s hydrograph for the River Ayr at Catrine and have marked the image with the time that is a minimum estimate of the period that salmon can’t access the pass due to turbulence and velocity of the flow across the entrance to the pass. I expect that by morning, the water may have dropped back further and the pass will be accessible but will visit again to confirm this. I will be discussing these observations with CCT and SEPA at their earliest convenience. 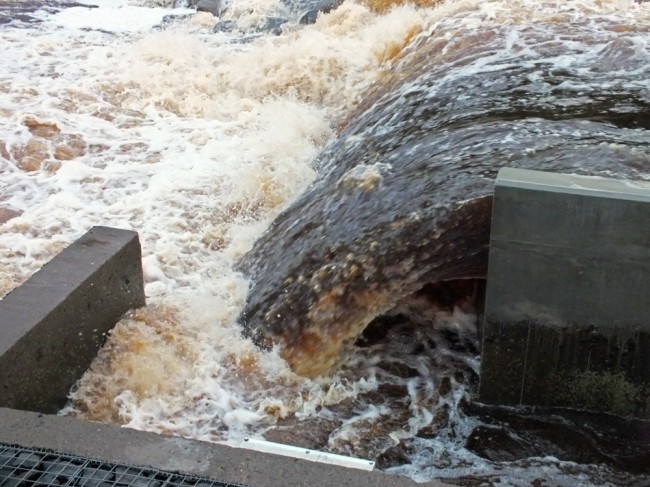 The hydrograph below is generated from SEPA’s gauging station a short distance downstream of the weir in Catrine. 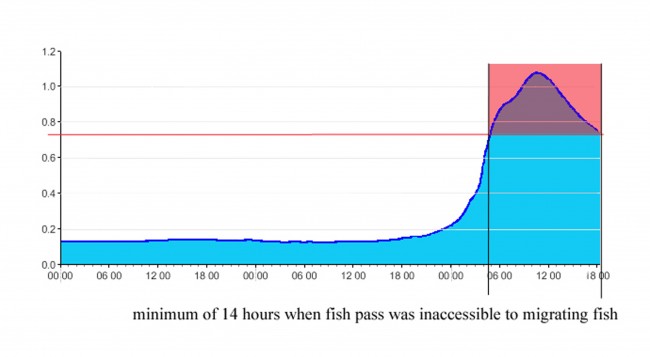 Hydrograph adapted from SEPA’a data. The red horizontal line indicates the height at which we believe the fish pass is inaccessible based on our observations so far. The peak period of the hydrograph (shaded red) is all inaccessible. It will be interesting to see the level tomorrow morning and whether access has improved. During the last spate in August, we estimated the inaccessible flow height to be around 0.5m but the work hadn’t finished at that point so it may have improved; time will tell. 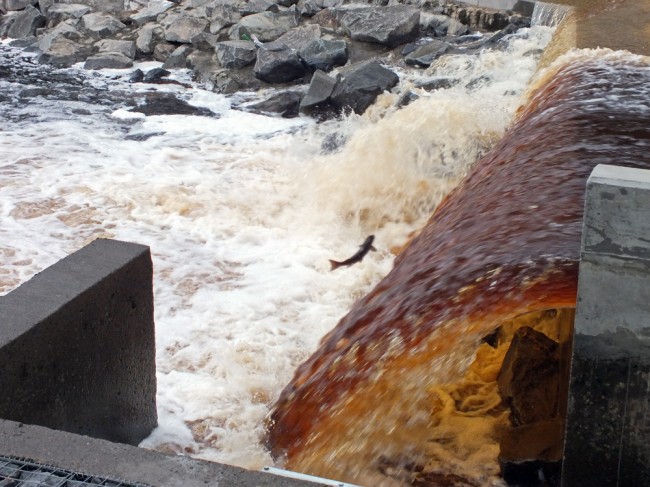 One of 3 different salmon I saw at the dam around 5.30pm this evening. I watched for about an hour and these were the only fish I saw and all tried to run the dam rather than the fish pass.

I’ve been at Catrine twice today and saw few fish on both visits. Those I did see weren’t fresh so hopefully anytime soon, a good run will arrive straight from the sea to test the ladder. The river level this morning remained high and it seemed doubtful that the fish pass entrance was adequately defined to allow any salmon to find it. I returned late this afternoon and the level had dropped but once again the entrance was turbulent and not easy to find (probably not impossible but difficult). I saw numerous trout leaping at the rock armour on the right bank and three different salmon all trying to run the dam rather than the fish pass. Obviously there isn’t an adequate attraction flow at the entrance to the pass. This may be largely due to the volume of water still  flowing over the dam back.
As levels drop further, things will improve but I’m my opinion, this is inadequate and needs urgent attention. Over this weekend, the fish pass has been virtually inaccessible for a minimum of 32 hours and probably more.