This afternoon I was back in the Garnock Valley crossing a few t’s and dotting the i’s before I submit a report to a client. Once I’d finished my work, I stopped off at the Holmhead Weir in the town to see if I could see fish moving over it. I’ve been approached and a meeting has been arranged with the Trust in advance of the Flood Protection Scheme going out to consultation. The river channel may soon be to receive major modifications to relieve the flood risk to the town centre so it will be good to hear and see what’s planned. I’ve suggested that a representative of Kilbirnie Angling Club should be invited and I’ll arrange that in due course.

I didn’t have to wait long at the weir until I saw a fish trying to get over what can only be described as a difficult weir. There’s no fish pass and legally it should have one. The sill at the top of the weir makes it very difficult for fish to get over after a hard swim up the long sloped face. Several salmon  swam up the slope with their tails breaking the surface. Once at the top, their problems started and some were washed back to the foot of the weir before they made it over. This could be improved so easily that I’m surprised no one has made a few alterations in the past. 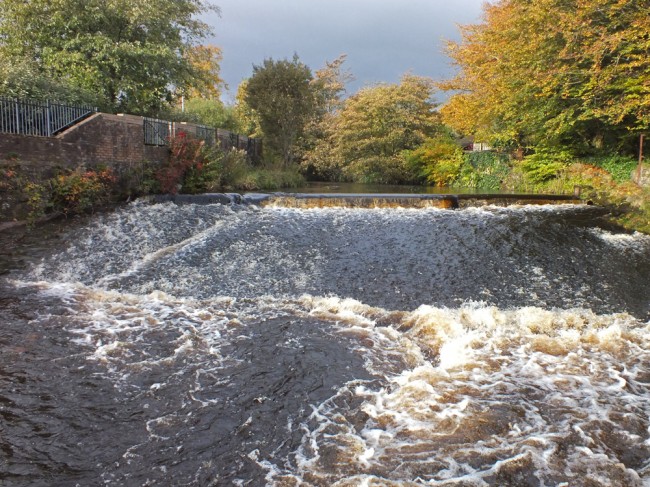 The weir at Holmhead in Kilbirnie. Not easy to pass by any means

Looks like it’s going over? It didn’t make it at this attempt and I didn’t see it again so I presume it was washed back to the pool below 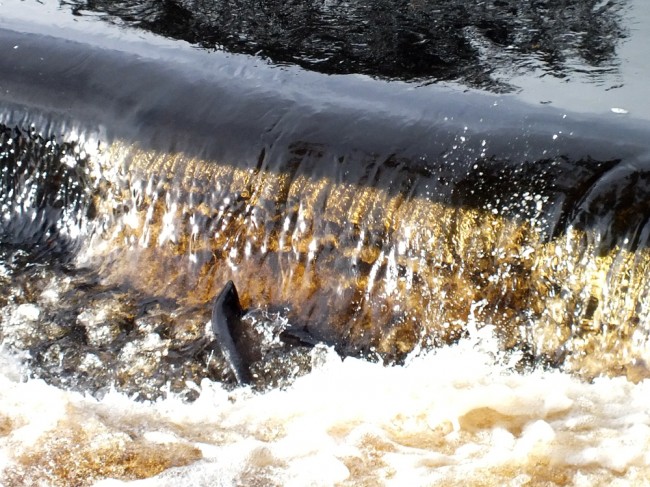 Another salmon having a hard time but it did eventually make it over. I watched it swim from the bottom of the weir. Perhaps it was the same fish as in the photo above on a second (or ? attempt).

I’ll be very interested to see what’s proposed for improving flood defences and reducing the risk to the town.