Bogton Loch beside Dalmellington was one place I’d never really visited until today. Of course I’d seen it and walked around some of it in the past, but I had no idea of   depths or the really anything else other than it has a reasonably large pike population and some of then run to a large size. With permission from the owner we headed to the loch around lunchtime. I was interested to look at where the river enters the loch, particularly to see the weed beds in the margins at that point as I wondered if it may be a great ambush point for pike to predate smolts as they descend during their spring migration.

Armed with a depth sounder and the inflatable boat, Muir and I headed there for a few hours today to see what we could see. Now just by chance I had a wee spinning rod and a few small lures in the van so we took this with us too. 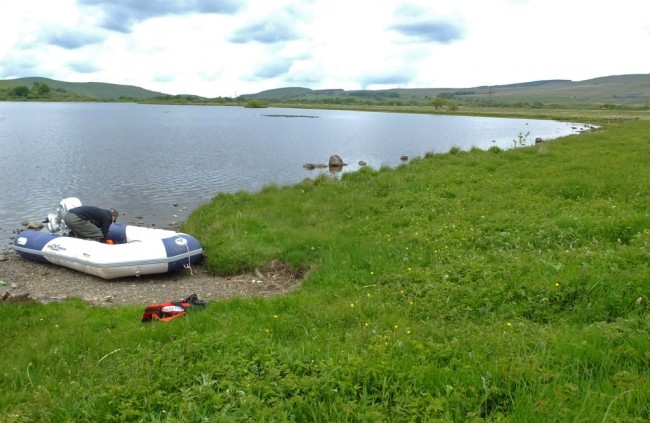 Muir getting the boat ready beside Bogton Loch at Dalmellington.

Almost immediately it was obvious that there was no depth to the loch. The sounder struggled to fix to bottom it was that shallow and I estimate the large majority of the loch is between 3 and 4 feet deep. We only found one point along the south western shore where the depth reached 5-6 feet and a small area on the other side. Much of the bottom was sandy/silt with a carpet of weed over it. Lilly pads have just reached the surface and many more are soon to appear. I don’t think I’ve ever seen as many beer cans dumped into a loch as I saw there today. Take your litter home with you! 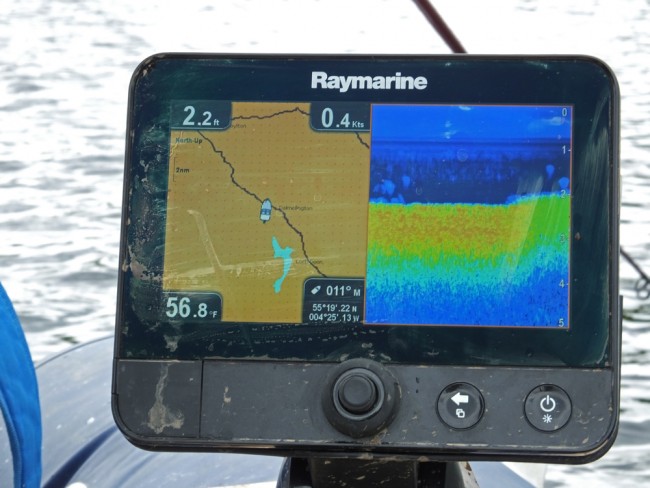 The sounder quickly revealed that Bogton Loch was very shallow indeed. I hadn’t expected it to be deep but neither did I expect it to be so uniformly shallow. Th image shows the loch to be 2.2ft deep but you have to add on another foot to account for the transducer sitting below the surface on the transom.

The weedy margings were mainly along the souther shore but they didn’t encroach near the river mouth or outfall and I expect smolts will very quickly pass through the loch although undoubtedly some will disappear down the throats of the pike in the loch but hopefully not too many. It would be an interesting exercise to try a smolt trap upstream on the river and downstream of the outfall to see what percentage are lost.

There were 7 or 8 swans on the loch and a few ducks but we kept an eye out for the osprey from Loch Doon appearing but unfortunately it didn’t. We watched for rising trout but didn’t see any and I expect that they will be few and far between preferring the relative safety of the river to the dangers of the loch. We decided to spin a lure for a while to see what we could catch and failed. I expected to pick up a pike, a perch or two and  and possibly even a trout but no. A couple of pike followed the lure to the side of the boat typically turning away at the last moment and eventually we managed to hook a small jack as we headed in but it dropped off right at the boat.

It was a nice day to be out on the water and at least we answered the questions we had but as ever, that raises more but they will keep for the time being. The inflatable is proving very handy and we purchased this though the CIRB Invasives project before it finished to allow us to continue controlling Giant hogweed in difficult to reach places on the River Ayr but it is proving to be very useful for other things too.