The survey season is limited as we can’t start fishing too early to ensure that the fry are well enough developed to withstand the process. Once we have caught a sample we anaesthetise the fish to make them easier to handle and then measure and if necessary scale sample some of them. Once all the fish have been recorded and recover from the process, they are released back into the water from where they came. 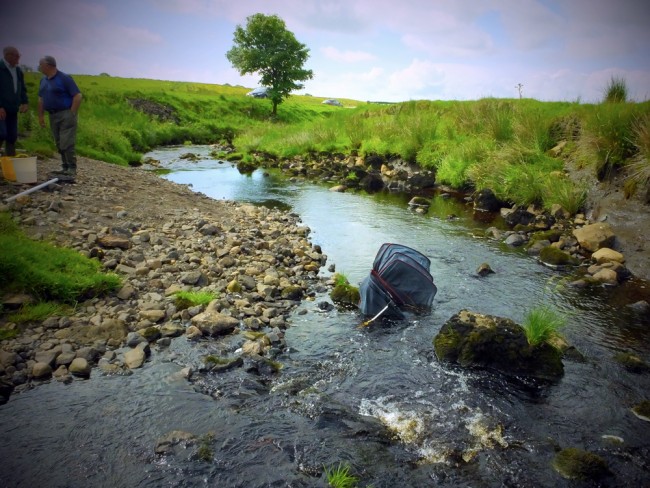 A mixed habitat site that we fished where we found 2 salmon parr and three fry. Trout parr and adults were plentiful. The habitat would benefit from a few trees to add shade and leaf litter and livestock fencing to exclude cattle and sheep from the water course.

Today was the first outing of 2015 and we started by looking at the Fenwick Water on the Irvine catchment. The purpose of todays investigation was to see whether the salmon that the River Irvine Angling Improvement Association hatchery had released earlier this year and last year had survived in reasonable numbers. Marine Science Scotland issues stocking licences but require monitoring of the success. We had looked last year further downstream but found no salmon fry (salmon in their first year of life – aged 0+). This year we were pleased to be accompanied by some of those involved in the hatchery to ensure we were looking in the right places. Approximately 18,000 fed fry were released in May into the upper reaches of the Fenwick Water where water quality and habitat are on the whole suitable for juvenile salmon. That doesn’t mean that it couldn’t be improved and we are already working to secure project funding designed to achieve this.

We picked a site that had everything; good spawning substrates, good fry habitat, pool habitat for parr and adult fish, adequate cover for fish to seek refuge etc. After a quick survey we examined the catch in detail. Apart from good numbers of trout we also recorded salmon fry and two parr ) salmon that have over wintered in freshwater as juveniles – aged 1+, 2+ and rarely even 3+)  . The three fry we caught were most likely as a result of the stocking as they were very uniform in size) but we can’t be 100% certain. The two parr we caught were of wild origin and are the product of eggs laid during the winter of 2012/13 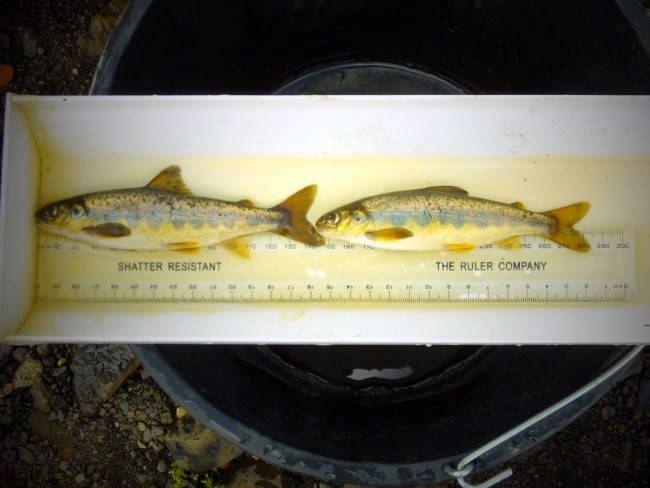 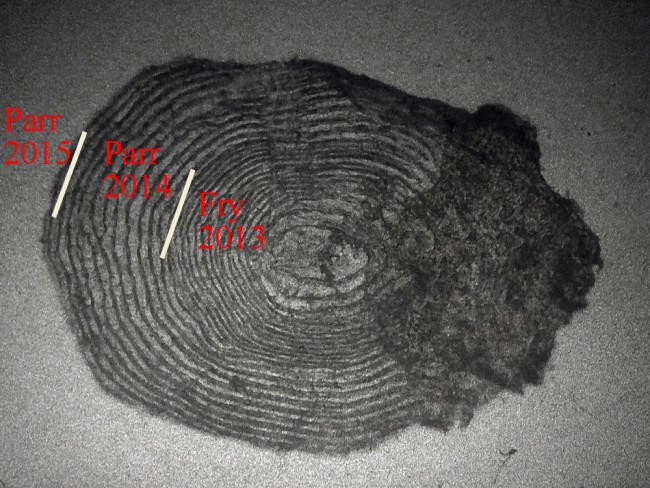 Scales from the 137mm salmon parr. There’s virtually no growth showing on the scale this year but that may be due to the cold weather we’ve had so far this year. There’s not much closing for winter 2014 either but this fish has to be into it’s 3rd year given the size at the start of July and comparing growth rates to the trout in the burn

These parr were 130mm and 137mm long (typical of 2+ year old parr at this time of year). In 2012, ART completed the work to the Black Rocks Waterfall in Kilmarnock and this improvement allowed salmon to easily progress upstream into both the Fenwick and Craufurdland Waters for the first time in years. I say easily, but there was still another barrier (Dean Ford) to overcome but at certain heights of water, they managed. Last winter, the Dean Ford was replaced with a bridge culvert and salmon can now easily pass through to the upper reaches. But, at least we can now confirm that since 2102, salmon have been able to make it into the upper reaches of the Fenwick Water for the first time in years. Previous surveys failed to produce any salmon in this Burn. Success!

We electrofished another site further upstream where more salmon had been stocked this spring but disappointingly, we failed to find any surviving salmon fry and there were no parr. That doesn’t mean they aren’t there but the habitat was the best in the area for fry and I would have expected fry to feature in the survey results if they were there in numbers. Trout were plentiful and there was the usual mix of minnows, stone loach and sticklebacks but no eels. 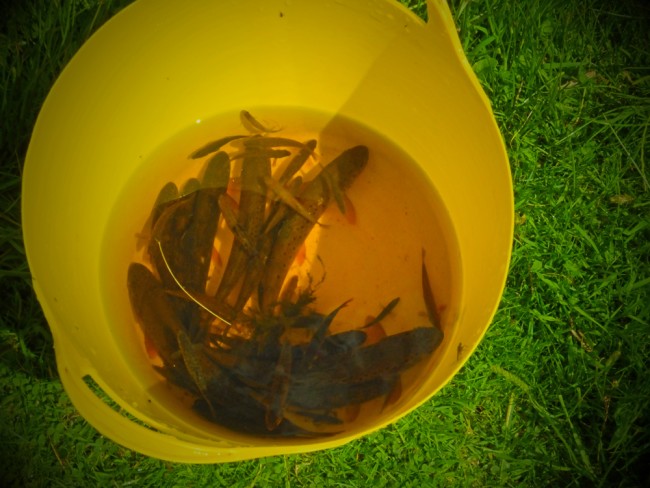 A bucket full of fish from the Fenwick Water. It is great to see such a healthy trout population that has never been interfered with. These fish have survived here with any supplimentary stocking since the end of the last ice age.

We decided to look further downstream too where salmon had been stocked in 2014 to see if there were any parr. We found trout but not in the number that I hoped and a single salmon fry. The habitat was perfect for spawning and fry but not so good for parr as it lacked fish cover. Even the fry would struggle to find adequate cover from predators. Parr prefer bouldery type substrates for shelter. We did pull a few nice trout from under the occasional undercut bank but it should be and could be better. I suggested that the angling club members and the RIAIA would have greater success if they concentrated on improving both instream and marginal habitat. The banks would benefit from riparian planting and this too would quickly add shelter and protection for fish. Predatory birds such as herons and gooseanders can quickly decimate juvenile salmonids in an area where cover is poor such as this. I see that this should be the number 1 priority especially now that salmon are again spawning naturally in this river. Numbers should quickly increase and the quickest way to achieve this is by habitat improvements. 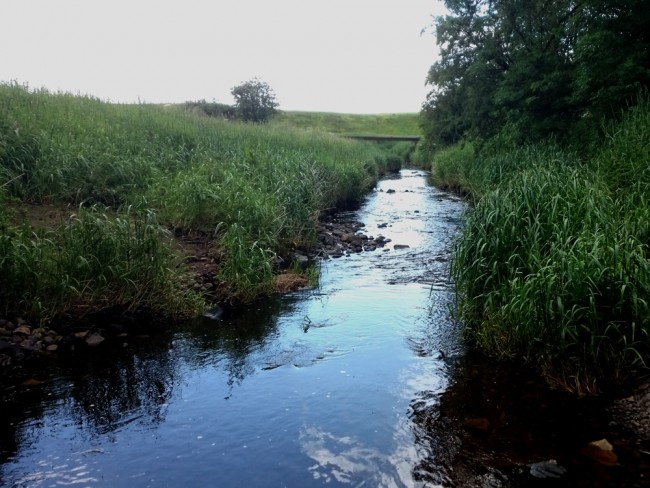 Rather featureless habitat but one that was stocked so we decided to see what was in it. It could easily be improved by adding a few boulders and some large woody debris to improve fish cover. Marginal trees would add shade and if the right species were planted, draped cover. This doesn’t take that long to establish and would quickly increase the carrying capacity of this section of the Fenwick Water. 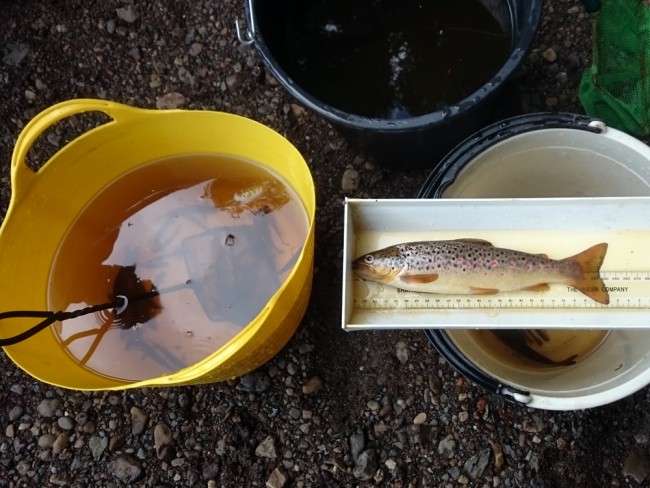 A plump trout that came from a bit of undercut bank. The only adult fish we found came from the few similar places of refuge.

It was a nice day to be back on the river and although the results raise several questions, we have more work to do in this area before we draw any firm conclusions.